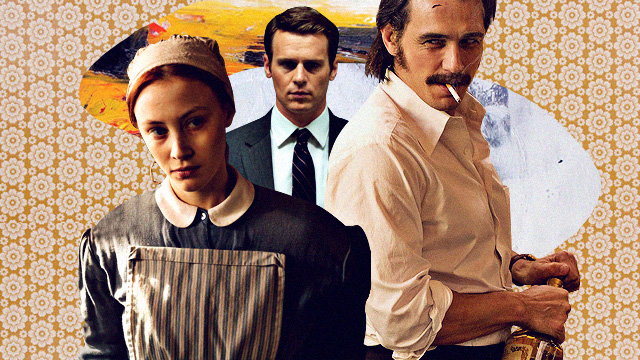 10 New TV Shows You Should Be Watching

So much TV, so little time!

(SPOT.ph) There are so many TV shows popping up left and right that it’s almost hard to keep up with all of them. It’s even harder to make time for them; not only do you have to catch up on your favorite show’s latest seasons, but you also have to keep an eye out for new series to binge-watch all weekend.

We already know of shows like Riverdale, Glow, and The Handmaid’s Tale, so we’re narrowing down your to-watch list to the best and most promising shows from the fall season. Go ahead, stay up late. We won’t tell your boss!

Many have drawn comparisons between this Netflix show and Breaking Bad: Both series are centered on a middle-aged man caught in the drug cartel. That’s where their similarities end. While Breaking Bad details the rise of Walter White as a drug kingpin, Ozark depicts Marty (Jason Bateman) as a financial planner who is already in the middle of laundering money for the cartel. The story picks up when Marty suddenly relocates his family to a resort community in Missouri after his money laundering scheme goes horribly wrong, and he must find a way to pay off his debts to a Mexican drug lord.

Executive-produced and directed by David Fincher (Se7en, Zodiac), the story is inspired by John E. Douglas and Robert K. Ressler, who headed the FBI’s Behavioral Crime Unit and interviewed dozens of infamous serial killers to understand how their minds work. Although Jonathan Groff and Holt McCallany’s characters are only based on the real-life profilers, the serial killers depicted on the show are very real. Mindhunter features names like Edmund Kemper (known as the “Co-Ed Killer,” who decapitated his victims then performed sexual acts with their severed heads) and Jerry Brudos (who would dress up in heels and masturbate to them after committing a murder).

True-crime documentaries like The Keepers and Making a Murderer are all the rage, so a satire about the genre was bound to happen. Netflix’s American Vandal sharply skewers documentaries by telling the story of a high-school prank that vandalized 27 faculty cars with penises. A troubled senior is expelled for the crime, and Peter, a sophomore and aspiring documentary filmmaker, takes it upon himself to uncover the truth.

This medical drama enlists Bates Motel star Freddie Highmore to play Shaun Murphy, a young and brilliant pediatric surgeon with autism. After relocating to a prestigious hospital, he saves lives with his extraordinary skills but struggles to personally connect with his skeptical colleagues. Co-created by David Shore (the same guy behind House), this show is based on the 2013 K-Drama of the same name.

This harrowing true-crime documentary series depicts six real-life murder cases where law enforcers use psychological tactics in interrogation to extract a false confession. Each episode weaves taped confessions with real media footage and interviews with the suspects’ families, police, lawyers, and other experts. It’s hard and frustrating to watch, but fascinating all the same.

Admit it: Sometimes, you just want to tune out the world with an unashamedly fun guilty pleasure. In this reboot, Elizabeth Gillies plays Fallon, an heiress who returns home and learns that her billionaire father is engaged. Even worse, her new step-mother also happens to be her rival for COO of her father’s company. Netflix’s modern-day update of the ‘80s drama was co-created by Josh Schwartz, who was also behind your favorite teen soaps, The OC and Gossip Girl.

Following on the heels of the immensely successful Legion earlier this year, the X-Men universe continues to expand in TV. This time, two ordinary parents (Stephen Moyer and Amy Acker) take their family on the run after learning that their children have mutant abilities. So far, the series has been praised by critics for its cast and sharp social commentary.

After taking the Emmys by storm with The Handmaid’s Tale, another Margaret Atwood classic is coming alive on the small screen. Sarah Gadon plays Grace Marks, a real-life and immigrant who was convicted of murdering her employer, Thomas Kinnear, in 1843. The twist? Sarah claims she has no memory of the murder ever happening. The series starts streaming on Netflix this October 30.