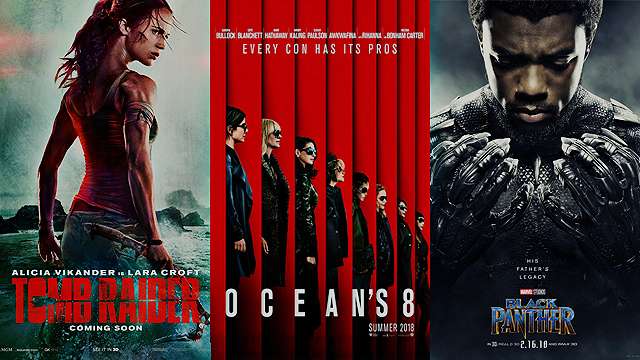 The biggest blockbusters you can't miss in the new year.

Below, we list the biggest and most exciting blockbusters set to hit theaters in the new year. Call your friends, pencil in these release dates, and gear up for a 2018 filled with cinema.

It seems Chadwick Boseman's appearance in Captain America: Civil War made more than a lasting impression, because his standalone movie is easily one of the most anticipated superhero flicks of 2018. After the death of his father, T'Challa (Boseman) returns home to the isolated African nation of Wakanda, where he must take his rightful throne as King and face up with old enemies bent on taking his place.

Ex Machina director Alex Garland returns to the big screen with a new sci-fi thriller based on a best-selling book trilogy. Here, a biologist (Natalie Portman) investigates the disappearance of her husband (Oscar Isaac) in a mysterious disaster zone where the laws of science don't apply. The film also stars Jennifer Jason Leigh, Gina Rodriguez, Sonoya Mizuno, and Tessa Thompson.

Lara Croft is back in a reboot of the film franchise that once starred Angelina Jolie. Now, a much-younger Lara (Oscar winner Alicia Vikander) goes on an epic expedition to complete her missing father's (Dominic West) research only to uncover an ancient secret in a mythical island.

Based on Ernest Cline's 2011 bestseller of the same name, Ready Player One is set in the year 2045, with a chaotic world on the brink of collapse. When the founder of a virtual reality world called OASIS passes away, a young boy (Tye Sheridan) competes with his friends to find a hidden treasure by playing games and solving complex puzzles. Directed by Steven Spielberg, the movie also stars Ben Mendelsohn, T.J. Miller, Simon Pegg, and Mark Rylance.

A Wrinkle in Time

Another highly anticipated book adaptation is A Wrinkle in Time, a fantasy-adventure where a young girl sets out to save her astrophysicist father, who is being held captive on a distant planet. The star-studded cast includes Oprah Winfrey, Reese Witherspoon, Mindy Kaling, Gugu Mbatha-Raw, Zac Galifianakis, and Chris Pine.

The sequel to the immensely popular 2013 film is set 10 years after the first movie's epic battle. Now the most powerful defense force, the Jaeger program must recruit a new generation of heroes to defend the world from another Kaiju threat. The cast is top-billed by Star Wars' John Boyega, Scott Eastwood, Charlie Day, and recurring star Rinko Kikuchi.

Wes Anderson is back with a promising stop-motion animated film that is set in a dystopian future where dogs have been quarantined in an island because of a "canine flu." Fed up with their isolated existence, five dogs embark on an adventure with a young boy in search of his missing dog. The movie features the voice talents of Bryan Cranston, Edward Norton, Bill Murray, Jeff Goldblum, Scarlett Johansson, Greta Gerwig, Ken Watanabe, Yoko Ono, and Tilda Swinton.

Ryan Reynolds' hilariously foul-mouthed mercenary is back to crack witty jokes and break the fourth wall. Not much is known about the plot as of writing, but we do know that Morena Baccarin and TJ Miller are slated to return, alongside new faces like Josh Brolin as Cable and Atlanta's Zazie Beetz as Domino.

The pressure is on for the Star Wars franchise as it continues to expand its universe with more standalone stories. The embattled Han Solo origin story has had its share of setbacks, after initial directors Phil Lord and Christopher Miller (The LEGO Movie) left after "creative differences" with Lucasfilm. Now helmed by Ron Howard, the adventures of a young Han Solo (Alden Ehrenreich) is officially a go, alongside Donald Glover (as young Lando Calrissian), Woody Harrelson, Emilia Clarke, and Paul Bettany.

The long-awaited follow-up to the 2004 Pixar hit is finally here! Writer and director Brad Bird returns to helm the sequel where the Parr family struggles to balance normalcy with saving the world and discovering Jack-Jack's hidden powers. Our inner kids can't wait!

The fifth installment of the Jurassic Park franchise sees the return of Chris Pratt, Bryce Dallas Howard, and Jeff Goldblum as they attempt to rescue Isla Nubar's remaining dinosaurs from a catastrophic volcanic eruption.

Set after the events of Captain America: Civil War, Scott Lang (Paul Rudd) finds himself struggling to balance his life as Ant-Man and his responsibilities as a father. Meanwhile, a new threat looms and he must now team up with Hope van Dym (Evangeline Lilly) as she discovers her powers as Wasp.

Taking place after 2008's Mamma Mia, the new sequel has a pregnant Sophie (Amanda Seyfried) manning the tavern. She also learns more about her mother, Donna's (Meryl Streep), own struggle of pregnancy and raising a daughter on her own. The original cast, including Julie Walters, Christine Baranski, Pierce Brosnan, Colin Firth, and Stellan Skarsgard, all reprise their roles, with Lily James playing a younger Donna.

The hotly anticipated adaptation of Kevin Kwan's best-selling novel is finally hitting the silver screen! Leading the all-Asian cast is Fresh Off the Boat's Constance Wu as Rachel Chu, who learns that her boyfriend (Henry Golding) is actually from one of the wealthiest families in Singapore. The film also stars Michelle Yeoh, Chris Pang, Gemma Chan, Harry Shum Jr., Awkwafina, and more.

As of writing, not much is known about this R-rated Spider-Man spinoff, though we do know that it stars Tom Hardy in the titular role alongside Oscar winner Michelle Williams. Because of conflicting reports, it's still unclear whether Venom is a solely Sony project or will share the current Spider-Man universe in Marvel. Riz Ahmed, Jenny Slate, and Reid Scott are also rumored to be part of the movie.

Now the 13th film in the massive X-Men franchise, this new flick sees the return of your favorite mutants (including Michael Fassbender, James McAvoy, Jennifer Lawrence, and Nicholas Hoult) as they try to control Jean Grey's (Sophie Turner) unpredictable powers. Meanwhile, a new villain (Jessica Chastain) seeks to use Jean's power for her own malevolent plans.

In Newt Scamander's (Eddie Redmayne) latest adventure in 1920s Paris, he must join forces with Albus Dumbledore (Jude Law) to face the growing threat of the evil Gellert Grindelwald (Johnny Depp). The movie is helmed by long-time Harry Potter director David Yates, with a screenplay penned by J.K. Rowling.

After making a splash in 2017's Justice League, Aquaman (Jason Momoa) faces the truth about his heritage as the ruler of Atlantis, all while trying to prevent his people who are bent on invading the surface world. Directed by James Wan, the standalone story also stars Amber Heard, Patrick Wilson, Nicole Kidman, and Willem Dafoe.

New Movies 2018 Movies Must-see Movies Movies
Your Guide to Thriving in This Strange New World
Staying
In? What to watch, what to eat, and where to shop from home
OR
Heading
Out? What you need to know to stay safe when heading out