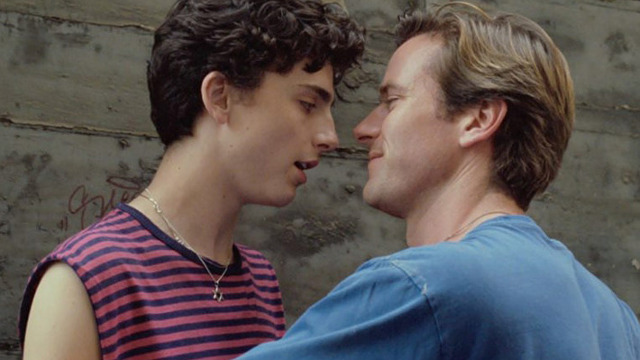 Call Me By Your Name, The Greatest Showman, and more!

(SPOT.ph) Happy New Year, Spotters! Kick off 2018 with a fresh batch of movies you need to pencil into your busy schedules. This January, keep an eye out for the last performance of the Bellas, a reboot of your favorite childhood movie, and the nationwide release of one of 2017's best films.

Touted as the last movie in the popular Pitch Perfect franchise, the third installment has the Bellas fresh out of college and struggling to make it in the real world. They finally get a chance to reunite when they hear about a competition at an overseas tour. Anna Kendrick, Anna Camp, Brittany Snow, Rebel Wilson, and Hailee Steinfeld all reprise their roles.

Jumanji: Welcome to the Jungle

Before you get too nostalgic, this sequel isn't quite like the '90s Robin Williams classic that you remember. It follows four teenagers who are transported into the video game world of Jumanji, which they must beat in order to return to the real world. Dwayne Johnson, Jack Black, Karen Gillan, and Kevin Hart play the teens' video game characters, alongside Nick Jonas, Bobby Cannavale, and more.

Ready to sleep with the lights on? The fourth installment in the immensely popular franchise picks up where the 2015 film left off. Elise Rainier (Lin Shaye) heads to her childhood home in New Mexico to investigate a series of supernatural disturbances that are haunting the new family living there.

Chris Hemsworth stars as the captain of a special military task force sent to Afghanistan following the 9/11 attacks. Based on a non-fiction book by Doug Stanton, the movie also features Michael Shannon, Michael Pena, Trevante Rhodes, and more.

Director Jun Robles Lana of Die Beautiful fame helms this fabulous comedy about two devoted wives (Judy Ann Santos and Angelica Panganiban) who both learn that their husbands are gay and have been cheating on them. JC De Vera and Joross Gamboa play their husbands, alongside a cast that also includes Gladys Reyes and Carmi Martin.

The final installment in the Maze Runner trilogy shows Dylan O'Brien's Thomas leading an escaped group of Gladers to break into the legendary and deadliest labyrinth in the dystopian world. Kaya Scodelario, Thomas Brodie-Sangster, Ki Hong Lee, and Will Poulter reprise their roles with Giancarlo Esposito, Nathalie Emmanuel, Aidan Gillen, and Patricia Clarkson.

Initially screened during the 2017 Cinema One Originals, this Oscars frontrunner stars Timothee Chalamet as a young teenager who falls for Oliver (Armie Hammer), a handsome doctoral student working as an intern in their home during the summer. This critically acclaimed drama is directed by Luca Guadagnino.

In this period piece set in the early days of World War II, Academy Award nominee Gary Oldman transforms into Winston Churchill as he tries to negotiate a peace treaty with Nazi Germany.

Inspired by the life of P.T. Barnum (played by Hugh Jackman), this original musical centers on the famed American showman and the colorful characters who are part of his circus. The star-studded cast also includes Michelle Williams, Zendaya, Zac Efron, and Rebecca Ferguson.

New Movies Release Date January 2018
Your Guide to Thriving in This Strange New World
Staying
In? What to watch, what to eat, and where to shop from home
OR
Heading
Out? What you need to know to stay safe when heading out