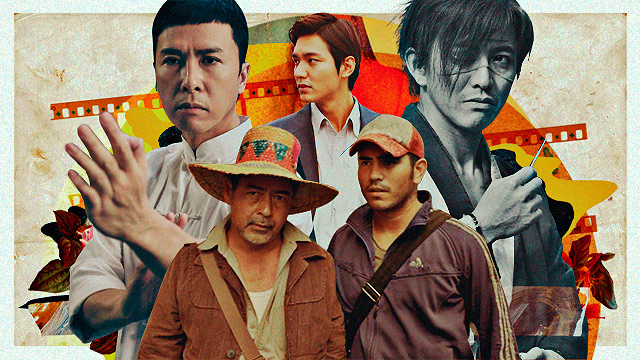 From gangster films to political and historical fiction.

(SPOT.ph) The action film genre is embedded in the DNA of Asian cinema. Martial arts movies made Bruce Lee and Jackie Chan household names. Period and fantasy films like Crouching Tiger, Hidden Dragon, and House of Flying Daggers also proved to be popular with a global audience, solidifying Asia’s place in world cinema. But, the golden age of Asian action films isn’t over, with both mainstream and independent filmmakers taking a stab at this genre. Here are some notable yet underrated Asian action films from the past decade that deserve another watch.

The man who taught his techniques to Bruce Lee? Well, of course they would have a film about his life. Ip Man, played in the eponymous film series by Donnie Yen, is known as the grand master of the martial art, "Wing Chun." Ip Man taught and practiced martial arts even at the height of China’s Japanese invasion in the '30s. While there are several other films that tackle the life of Ip Man, a lot of critics agree that the Ip Man trilogy is one of the best retellings of the legend’s life.

A remake of the 1963 with the same name, 13 Assassins is directed by Takashi Miike, who is known for his psychological and gore thrillers. The fictional story set in the Tokugawa Era is about a group of samurai who are avenging a dishonored family by killing the tyrant Lord Naritsugu (Goro Inagaki). They do this by booby-trapping an entire town and by showing off their swordsmanship. What follows is like a bloody version of the game show Takeshi’s Castle, minus the laughter.

What happens when you kidnap the best friend of an ex-black operative soldier? Bloody carnage. The Man From Nowhere takes on the lone-wolf assassin trope with a twist—Cha Tae Sik (Won Bin), the titular “Man from Nowhere” is actually best friends with a little girl named So Mi (Kim Sae-Ron), the only person in the world who seems to be able to understand him.

The film was also South Korea’s highest grossing film for 2010 and has garnered international attention for its violent showdowns and touching story.

From the same company that produced Crouching Tiger, Hidden Dragon, and Kung Fu Hustle comes a cop film about a raid and a plan to assassinate a crime lord, to be executed by the country’s elite task force of 20 men. What awaits them is 30 floors of madness and adrenaline-pumping action. The film also features "Silat," an Indonesian indigenous martial art.

A 70-hour work week and the usual stress of suburban life seems to take its toll on “company man” Hyeong Do (So Ji-sub) but that’s only because his company is not quite typical. They’re a contract-killing company, tasked by clients to kill people however they want and according to the clients’ wishes. However, Hyeong Do falls in love and decides to leave the company…but he has to make his way out alive when his former colleagues start to hunt him down because they see him as a loose end they need to tie up.

Based on the popular manga and anime (known here in the Philippines as Samurai X) the movie series was praised by both critics and fans alike for staying true to the original story and delivering action-packed scenes without the fake flying cheesiness. Rorouni Kenshin tells the story of the wandering samurai Himura Kenshin (Takeru Satoh), who is trying to change his ways, after his stint as the famous assassin known as Battousai the Slasher.

The first film in the series was so popular in the Philippines that the cast even stopped by the country for the premiere night of the second film.

This Star Cinema film directed by Erik Matti not only boasts a stellar cast but also of a solid and gripping story about political intrigue and murder. Starring the likes of Joel Torre, Gerald Anderson, Joey Marquez, and Piolo Pascual, On The Job deviates from the norm of Filipino action films by being gritty and real—protagonists aren’t bullet-proof in this movie and the henchmen have hearts.

The film was well-received in international film festivals and a mini-series is also in production.

The sequel to the hit 2005 film, The Protector series is about the family tasked to protect the elephants of the royal family. The first film’s story revolves around the stolen elephants while the second film explores goes beyond that and follows a plot line of kidnapping and human trafficking. Kham (Tony Jaa) is suspected as the murderer of a man who tried to buy his elephant. While on the run, he meets Mark (Petchtai Wongkamlao), an Interpol agent who's in the country to attend peace talks. As they work together, they realize that Kham being framed and the peace talks are all related.

The film was distributed in the U.K. as the Warrior King and Thai Dragon or Honor of the Dragon in other countries.

Asia’s heartthrob Lee Min Ho makes his transition as a leading man from the TV to the silver screen in Gangnam Blues. A far cry from his usual teeny bopper roles, Min Ho plays the orphan Kim Jong Dae who got caught up in the gangster world. Inevitably, he had to go against his childhood friend Yong Ki, played by Kim Rae Won, to determine which gang will take control the real estate development of Gangnam in the ‘70s.

Interestingly enough, the movie used Freddie Aguilar’s "Anak" in its soundtrack because it was popular in Korea during the ‘70s.

Based on a manga with the same name, the movie tells the story of Manji (Takuya Kimura), an immortal samurai who is helping a little girl avenge the death of his father. The film doesn’t lack the action one expects from a samurai movie and it doesn’t skimp on the gore. Expect scenes where Manji’s dismembered body parts are reattached to his body in cinematic detail.