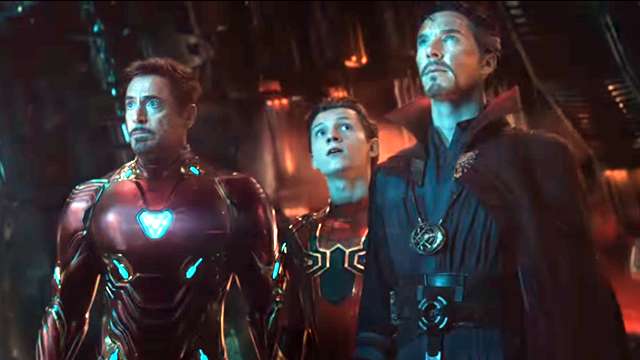 Including the first look at Solo: A Star Wars Story and the latest from Avengers: Infinity War!

(SPOT.ph) Every year, the Superbowl never fails to amaze and excite fans all over the world. But of course, it's not just the football fans who are in for a treat. Movie buffs get their own fair share of excitement with the release of new trailers for the most-awaited movies of the year. This time, we get our first look at the latest Star Wars movie, a new trailer for the Jurassic World sequel, more details about Avengers: Infinity Wars, and more.

In a suprise move, Netflix premiered the trailer of its latest sci-fi thriller movie helmed by J.J. Abrams (Star Wars: The Force Awakens, Star Trek). But the trailer also comes with the movie, as it also premieres on the streaming service today, February 5. The movie is part of an anthology series, the first one being 2008's Cloverfield and 2016's 10 Cloverfield Lane. The latest installment teases a connection with the first movie, saying, "Ten years ago, some thing arrived. Now, find out why." The trailer also shows some scenes from the original film. The Cloverfield Paradox revolves around a group of astronauts sent to space on a mission to solve an energy crisis on Earth. But things go wrong when the technology they have aboard the space station goes awry and the isolated astronauts have to fight to survive. The film stars Daniel Brühl (Captain America: Civil War),  Elizabeth Debicki (Guardians of the Galaxy, The Great Gatsby, The Man from U.N.C.L.E.), and Chris O’Dowd (Bridesmaids).

Academy Award-winner Jennifer Lawrence is Dominika Egorova, a Russian ballerina-turned-spy in this thriller film based on a novel of the same name by Jason Matthews. In the trailer, Egorova explains how she became a spy trained to seduce and manipulate, saying, "I saw something I was not supposed to. They gave me a choice: Die or become a Sparrow." But things get complicated when she falls for a CIA Agent that she was tasked to expose, making her consider becoming a double-agent.

Real-life couple John Krasinski and Emily Blunt star in this supernatural horror-thriller film written by Krasinski. The 30-second teaser shows a ransacked and abandoned town, and a few people making their way through the woods as quietly as they possibly can. Krasinski and Blunt are the parents of a family trying to survive after a supernatural evil being surfaces. The being is attracted to—and attacks—anything that makes a sound, so the family has to communicate silently and use sign language so they can stay alive.

The much-awaited culmination of the Marvel Cinematic Universe is almost upon us—and they're making sure we know it. (As if we needed any more reminding.) We already saw the Avengers from Earth gearing up for battle. There's also a shot of Captain America (Chris Evans) running into action, notably without his famous shield. But in this latest trailer, we now see him with a mechanical arm! (Bucky vibes, anyone?) We also see more of the Guardians of the Galaxy getting into the fight, too.

While Star Wars fans are possibly still reeling fom The Last Jedi, we've already got another upcoming stand-alone film coming our way—this time, it's all about Han Solo (#RIP). In the trailer, we see Han (Alden Ehrenreich) signing up to be a pilot and not just any pilot—"the best in the galaxy." The origin film tells us more about Han Solo's life and how he became friends with Chewbacca. The trailer also gives us our first look at Donald Glover's much-awaited performance as Lando Calrissian, as the film tells the story of how Han stole the Millennium Falcon from Lando. Also making an appearance is Woody Harrelson as Beckett, who is described to be Han's mentor and fellow criminal.

The last time we saw mutant dinosarus wreaking havoc on an amusement-park-slash-island was in the first Jurassic World film. In the first movie, trainer Owen Grady (Chris Pratt) teams up with Claire Dearing (Bryce Dallas Howard) to stop a terrifying mutant-dinosaur from destroying the whole place. This time, it's the dinosaurs they have to save from the island that's about to blow up. The latest trailer is sure to send some shivers down your spine when a huge dinosaur shows up in a little girl's bedroom and the only thing in between them is Owen's beloved velociraptor, Blue. Jeff Goldblum also reprises his role as Dr. Ian Malcolm from the Jurassic Park series.

Still fresh from the success of Jumanji, Dwayne Johnson is starring in a new, action-packed disaster flick called Skyscraper. You might remember his last disaster movie being San Andreas, where he plays a rescue-chopper pilot who saves his family during the aftermath of an earthquake and tsunami in California. Now, his latest offering once again features him as a family man, this time a former FBI agent who is now a security detail for the tallest building in the world, located in China. But then, a fire breaks out, trapping him and his family 240 floors in the air—and if that's not stressful enough, he also gets framed for the fire.

Tom Cruise returns as Ethan Hunt in the sixth and latest installment of the Mission: Impossible franchise and this time, things turn sour from the get-go. In the trailer, Hunt reunites with his team (Simon Pegg, Alec Baldwin, Ving Rhames) to try and find missing plutonium, which he loses track of after a previous mission. Now, he goes face-to-face with an ally-turned-foe Ilsa Faust (Rebecca Ferguson). Also making a comeback is Michelle Monaghan as Hunt's love interest Julia, whose death was revealed to be faked in Ghost Protocol. Meanwhile, newcomers include Angela Bassett (American Horror Story) and Henry Cavill (Superman, The Man from U.N.C.L.E.).

Infinity War Jurassic World Trailers Avengers Superbowl Star Wars
Your Guide to Thriving in This Strange New World
Staying
In? What to watch, what to eat, and where to shop from home
OR
Heading
Out? What you need to know to stay safe when heading out