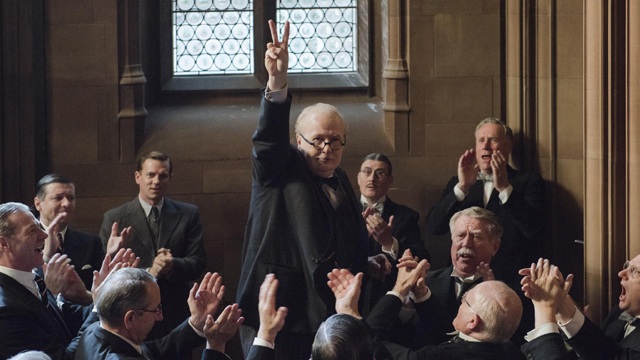 Under several pounds of makeup, Gary Oldman delivers a most passionate performance.

(SPOT.ph) Winston Churchill is one of those historical figures that most people all over the world know, no matter what country or background you're from. Churchill is intertwined with World War II history, and almost anyone who has gone to school and learned about world history would be able to identify him—his distinct face, the bowler hats, the cigars, his powerful speeches. We know a lot about Churchill through history books and audio recordings, but a living, breathing video during his height as Prime Minister is rare. What Gary Oldman achieves in his potrayal of the man is nothing short of masterful. This is more than an impersonation or some recreation, Darkest Hour is a piece of film where he brings Churchill to life in a way that's unlike any we've seen before. 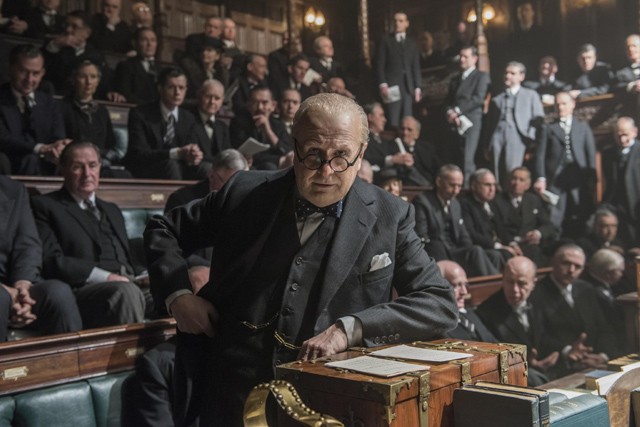 Focusing on just about a month of time in Churchill's life, the film begins right before Churchill's first term as prime minister starts, and moves towards Churchill's decisions leading up through the Dunkirk evacuation. The month or so covered a tumultuous time during World War II as the Nazis continued to steamroll through Europe with no end in sight, and in effect, a very crucial time in Churchill's early moments as prime minister. With the Nazis closing in on troops, other countries look to negotiate, but Churchill is against it. “You cannot reason with a tiger when your head is in its mouth!” he bellows.

Darkest Hour gives audiences a peek behind the curtain and into war rooms, Parliament meetings, and Churchill's own home to give as a broad but nonetheless absorbing depiction of a famous historical figure. Along the way, the film introduces the important and closest people around Churchill (Oldman), including his no-nonsense wife (Kristin Scott Thomas) and his struggling but ever-loyal secretary (Lily James). 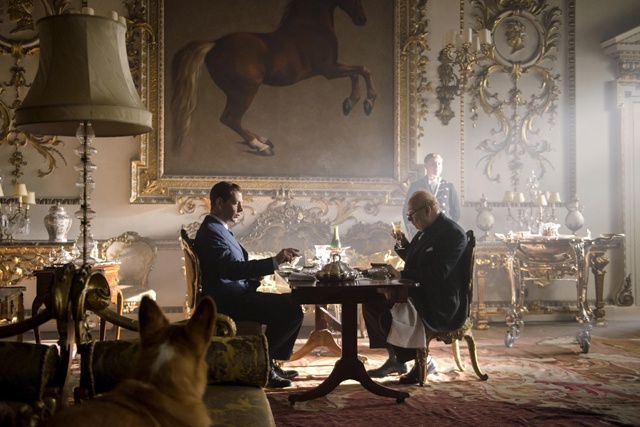 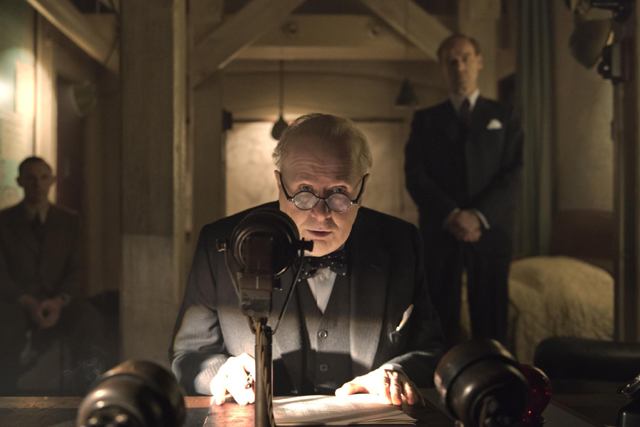 Darkest Hour is mostly a bunch of speeches strung together by small character moments, and any other film would feel like a waste if it didn't have such an incredible lead. Gary Oldman delivers one of the best performances of his illustrious career—and just generally one of the year's best. He portrays Churchill as a man who is as inspiring as he is bull-headed, spouting wordy, eloquent speeches with such spitting and rousing passion, that the makeup covering his face shakes. Speech after speech, Oldman smashes and delivers—whether it's the famous ones like the “Blood, toil, tears, and sweat” speech or the even more famous “We will fight them on beaches” speech that became a battlecry for many in World War II. He gives not just Churchill, but the film itself vivid and extraordinary life. The film overall might not be the most engaging or exciting, but Oldman will make you stare, feel, and experience something special. 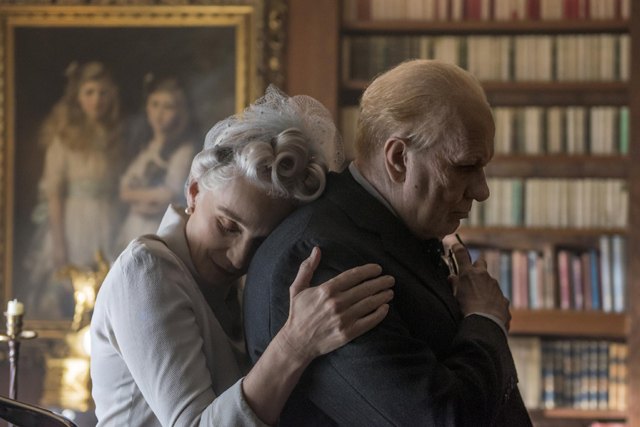 Oldman does the heavy lifting, as the film follows him for most of the runtime, but the supporting cast do what they can with minimal material. Kristin Scott Thomas, playing Churchill's wife Clementine, is the embodiment of the phrase “behind every great man is a great woman." Regal yet charming, she goes toe-to-toe with Oldman's Churchill, and she is the only person who can dress down this giant of a man. Also in the cast is Ben Mendelsohn, who plays a much more understated and quiet version of King George VI as compared to Colin Firth's Oscar-winning portrayal in The King's Speech. Meanwhile, Baby Driver's Lily James as Churchill's secretary Elizabeth Layton acts as the audience's surrogate, as she is a newbie entry into the fast-paced and unfamiliarly boisterous world of Churchill. 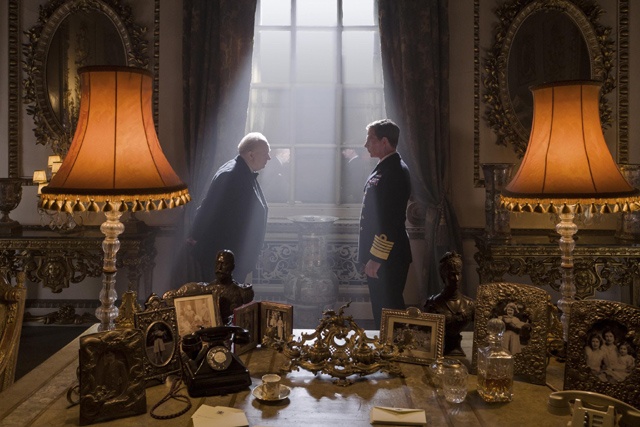 The main reason to come for Darkest Hour is the acting showcase that Oldman delivers. That doesn't mean that everything else is necessarily unworthy, it's just not as unique and as mesmerizing as Oldman, nor director Joe Wright's previous work. Still, there are parts of this film that are worth cheering for. Wright, the director of such period hits like Pride & Prejudice, Atonement, and Anna Karenina, is back to more familiar ground, after taking a slight misstep with Pan in 2015. He is much more comfortable with this kind of work—making something old look new and alive and invigorating.

From the streets of London to the inner workings of the Parliament, Wright and cinematographer Bruno Delbonnel shoot and light with an eye for beauty in darkness. While things may not look particularly joyful, the lighting is gloriously bathing the sets, and the camera flows freely from one space to another. It's a solid (but not perfect) use of Wright's stylishness, if a way to put him back into more familiar territory. The costumes and the production design, and of course the makeup, are spot-on. You almost don't notice them, but that's what makes it good. 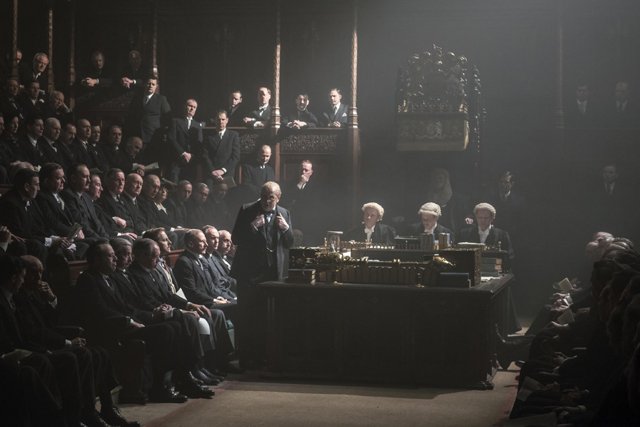 Darkest Hour feels more like a play than a movie—monologues, minimal sets, lots of yelling, and lots of spectacular acting. Wright injects some of his talents to make it more cinematic, but there is an argument to be made that this would be more powerful, more thrilling as a stage piece. Some scenes also seem to cheese it up too much (the Underground scene and the final shot in particular), celebrating a man too much rather than having a more interesting critique on war and the people who run it. 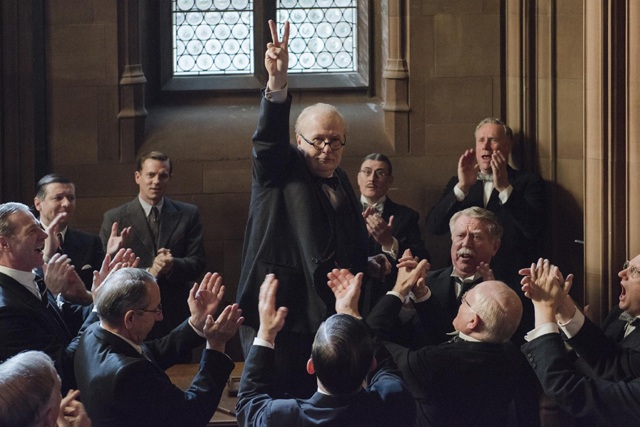 Another film from 2017 tackles the same exact time period. Mash up Darkest Hour with Christopher Nolan's Dunkirk and have a spectacular double-feature: A look at the battle on the frontlines and the battle in the war rooms. Both films end with the same famous, rousing speech—in Darkest Hour, delivered with powerful relish by Churchill, in Dunkirk solemnly delivered by a young soldier saved from Dunkirk—but both have a very different story to tell, and Darkest Hour shows that, as we see guns and bombs used in Dunkirk, words are just as powerful as weapons.

Darkest Hour Movie Review Gary Oldman
Your Guide to Thriving in This Strange New World
Staying
In? What to watch, what to eat, and where to shop from home
OR
Heading
Out? What you need to know to stay safe when heading out