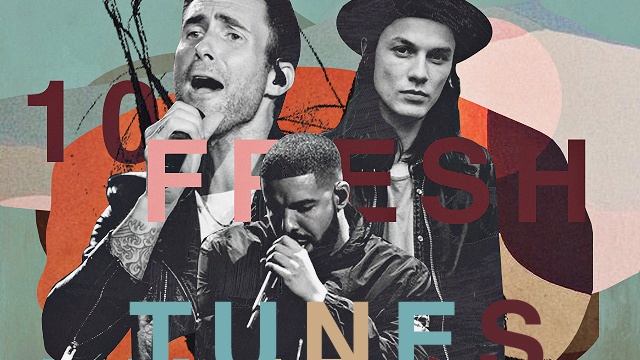 10 New Songs to Add to Your Playlist This March

Drake's latest single references ‘God,’ although we're not sure if he's referring to the supreme being or to himself. The autobiographical rap piece touches on a number of topics, including his superstar life, his roots, and his mom. In the music video, he surprises Miami residents with a series of philanthropic deeds.

Fun fact: "God's Plan" debuted at number one on the Billboard Hot 100 chart and set a record with 82.4 million streams on its first week of availability.

Local band Franco gets seductive with "All Nighter," an edgy, alluring number for those nights when you're feeling on the prowl and rebellious. The straightforward lyrics say it all. Watch for the sexy guitar solo toward the end.

"Wild Love," the first single off James Bay's forthcoming second album, is a departure from his debut record's guitar-driven sound. But we're not complaining. The sleek electro-R&B track makes for an effective teaser of what's to come. In it, Bay croons through warped synths and subdued guitars.

Fun fact: Chaos and the Calm, released in 2015, was the English singer-songwriter and guitarist's breakout album.

Normani Kordei (of Fifth Harmony fame) makes her solo debut in this sensual collaboration with breakout artist Khalid. "Love Lies" is a dreamy mid-tempo R&B number about falling in love. In terms of vocals, the two are a match made in music heaven.

Leila Alcasid is a revelation in her debut single titled "Completely in Love." The feel-good, sweet pop track is catchy and absolutely radio friendly. This could easily be one of your top summer anthems this year.

Fun fact: Leila is the daughter of Ogie Alcasid and Michelle van Eimeren.

Maroon 5 continues to fulfill our pop music cravings. "Wait" is one of the band's more memorable singles from the new record, with a heavier electronic influence and club-banger vibe. The recently released music video is a cinematic treat, too.

Six-piece indie band Farewell Fair Weather started the year right when they digitally released "Blank Pages," the title track off their forthcoming debut album. The guitar-heavy tune captures the rock and soul influences of the band.

Song: "Me and Michael"

If you haven't heard "Me and Michael," it's about time you do. The song made quite a buzz when it first came out, primarily because of its unique music video concept. "Me and Michael" is one of the band's chirpier singles, heavily inspired by European synth-pop.

Fun fact: The music video was made in collaboration with Filipino band True Faith. It shows MGMT 'stealing' a song from True Faith and becoming embroiled in controversy.

Well-loved local rock band The Dawn is out with the music video for their new single "Segurista." The upbeat rock track features Jett Pangan's familiar vocals against a dynamic arrangement.