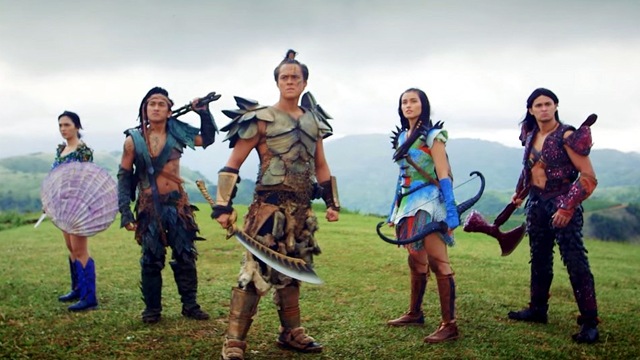 They've reached an agreement with the Commission on Higher Education.

(SPOT.ph) It wasn't too long ago when everyone on the Internet was talking about sinigang. It was, of course, a meme brought about by Liza Soberano's comment regarding the controversial casting of Bagani, her new teleserye with love-team partner, Enrique Gil.

The TV show, which premeired on March 5, drew flak on social media, with users arguing that actors with foreign features shouldn't have been cast for a story about prehistoric Philippines. They also took offense to the makeup that was used to make the actors look darker. Liza infamously defended the show with a now-deleted tweet, saying, "And who says we're not Pinoy? My father is full Filipino. I was raised by two Filipinos since the age of 4. I looooove sinigang [and] I think that's as Pinoy as Pinoy can get."

The show also drew the attention of the head of the Commission on Higher Education, Ronald Adamat, who was a former representative of the Indigenous Peoples Sector in Congress. As an Indigenous Person himself, he brings up that the word "bagani" is a word only used by indigenous people and asks ABS-CBN to reevaluate the show's title. "I cannot tolerate the public showing of the said teleserye as long as ABS-CBN would not revise the format and concept in order to render Bagani to become as educational as it can be, and make the same historically-accurate and culturally-accurate presentation of what the real "Bagani" is from the IP perspective."

But now, it seems that the Commission on Higher Education (CHED) and ABS-CBN have finally reached a deal regarding the show's title. In a report by PEP.ph, ABS-CBN says, "After hearing all sides, all parties have come to an understanding that the use of 'Bagani' is in good faith. In continuing the use of 'Bagani' for the teleserye, all have agreed to be partners in further educating the Filipino audience about Filipino culture and its roots from Indigenous Peoples (IP)."

There is also a disclaimer before every episode of the show. "Since it began airing on March 5, ABS-CBN has been showing a disclaimer before the airing of the program, emphasizing that the story is purely fictitious, takes inspiration from elements of Filipino mythology and folklore, and does not represent or pertain to any Indigenous Peoples in the country."

They conclude, "The show would like to reiterate that it recognizes the importance of the Bagani to our Indigenous Peoples’ culture and history and never intended to malign or disrespect their beliefs."

Bagani Liza Soberano Enrique Gil Abscbn
Your Guide to Thriving in This Strange New World
Staying
In? What to watch, what to eat, and where to shop from home
OR
Heading
Out? What you need to know to stay safe when heading out