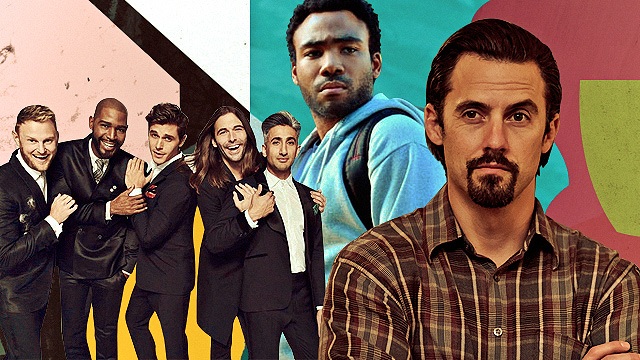 (SPOT.ph) There’s nothing like having a lot of options to choose from when you finally find enough time to sit down, relax, and watch an episode or two of a TV show. But in the sea of seamless streaming, numerous channels, and seemingly endless options, there are a select few shows that all your friends (and your friends’ friends) are watching. So we round them up—plus where you can watch them (legally!)—just so you don’t feel out of place in the TV world.

Netflix’s reboot of Queer Eye for the Straight Guy has been appealing not just to old fans of the show, but to newcomers as well—and it’s easy to tell why. The Fab Five is exactly what they sound like (and more, tbh!). They’re five gay guys who are essentially tasked with improving different aspects of the lives of guys who are in need of a little bit of help. The fun-loving Jonathan Van Ness is in charge of grooming, the posh Tan France is the fashion expert, impressive Bobby Berk refurbishes their homes, the savvy Karamo Brown helps out culture-wise, and soft-spoken (and devilishly handsome) Antoni Porowski handles the food. While the first version of the show aimed for the tolerance of gay culture, this one aims for acceptance—and soon enough you’ll find yourself saying, “Fiercedom, honey!”

Where to watch: FX Asia, Fox+

Undoubtedly one of the best TV shows on air right now, comedy-drama Atlanta is the brainchild and masterpiece of multi-hyphenate Donald Glover (a.k.a. rapper Childish Gambino). Glover plays Earn, a Princeton University dropout who’s trying to earn money by managing his estranged cousin’s rap career so he can improve the life of his girlfriend and their daughter. Aside from starring in the show, Glover also writes and directs it. The show has earned two Golden Globe Awards and two Primetime Emmys, making Glover the first African-American to win an Emmy for Outstanding Directing for a Comedy series.

Where to watch: Netflix, iflix

In this fantasy comedy, Eleanor Shellstrop (Kristen Bell) wakes up to find that she is in the afterlife. She’s introduced to the heavenly utopia she’s in, which is called “The Good Place,” and is told that she’s been sent there because she lived a virtuous life—but she didn’t. She realizes that she’s been sent there by mistake and tries to do good in order to stay in the Good Place. It’s a good watch if you’re looking for something lighthearted and funny!

Where to watch: Hooq

It's the streaming service's first-ever Hollywood original series, but it looks like HOOQ's already off to a good start with this cop drama that isn't your usual. Sure, you've seen cops investigate crime scenes on TV before, but this series also explores the underground gangs and corrupt practices of those who swore to serve and protect. It follows the story of a group of cop criminals and (not-so-surprisingly) it's actually loosely based on first-hand experience of a former undercover officer. It stars True Blood's Ryan Kwanten and Game of Thrones' Sean Bean.

Where to watch: 2nd Avenue

If you’ve seen more than the normal amount of crying emojis on your timelines, it’s probably because of this drama series. It revolves around the lives of three siblings: Kevin, Kate, and Randall. Kevin and Kate were originally supposed to be triplets, but their biological brother was stillborn, so their parents Jack (Milo Ventimiglia) and Rebecca (Mandy Moore) felt like they were destined to have three children so they adopted Randall, who was born on the same day in the same hospital. The family’s heartbreaking yet heartwarming story is told through flashbacks and at different points of the siblings’ lives before and after their father Jack dies.

Where to watch: iflix

If you're looking for a show that'll leave you asking "Wtf was that?" then this is the show for you. This drama-thriller revolves around Elliot Alderson (Rami Malek), a cybersecurity engineer and hacker who also suffers from psychological problems. He is recruited by a hacktivist called "Mr. Robot." He is tasked with a mission to erase consumers' debt by destroying the data of one of the biggest companies in the world, which also happens to be the biggest client of the company that he actually works for. While it centers around techonology, it'll also make you think about its moral consequences ans all the plot twists and turns are sure to have you glued to your screen.

RuPaul’s Drag Race is a reality competition show that follows drag queen RuPaul’s search for the next drag superstar. After nine seasons, the original show produced an all-star spin-off, in which past contestants compete for a spot in the Drag Race Hall of Fame. There are quite a few challenges that the queens have to go through, but one fan-favorite would be the Lip Sync for Your Legacy, where the two top queens battle it out in a lip-sync competition. The winner gets to choose which of the bottom queens to eliminate. And yes, it’s definitely as crazy and fun as it sounds.

An explosion goes off during the State of the Union Address and kills the President, Vice President, and everyone else in line for succession—except Thomas Kirkman (Kiefer Sutherland), the Secretary of Housing and Urban Development. He is the designated survivor, and having no one else to take the job, he is sworn in as the President of the United States. But that’s only the start of this exciting political thriller that'll definitely keep you on the edge of your seat.

Where to watch: Sony Channel

You might scroll through your feed and wonder why you’ve been seeing American Idol auditions again. One of the OG reality singing competitions is back after a one-year hiatus, this time with a new set of judges: country singer Luke Bryan, Katy Perry, and Lionel Richie. There have already been quite a few notable and memorable auditions—from a good-looking guitar player to a pubescent teenager who unexpectedly sounds like Frank Sinatra. It won’t be long until you’re hooked again and rooting for someone to win.

This is the show to watch for all the certified foodies out there. Each episode centers around a certain dish or concept and host David Chang (the founder of the Momofuku restaurant group) explores its origins and evolution in different regions around the world. It's not just about how the food is served today, but about where it came from and how it came to be just the way it is on your plate. It might leave you hungry and craving, but you'll also end up satisfied from learning a little bit more about what you eat.