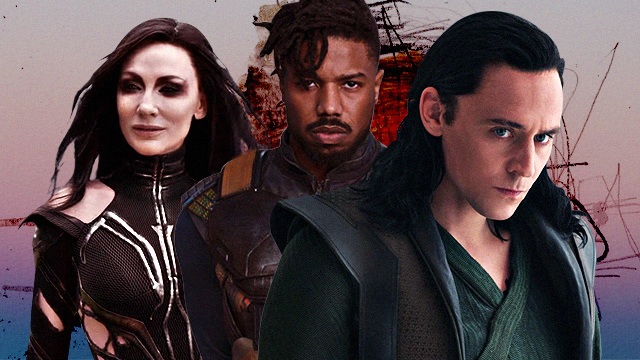 Thanos would be proud.

It's no secret that the MCU has always had a "villain problem," where bland and uninspired villains have populated the films over the years. Remember Malekith from Thor: The Dark World? How about Whiplash from Iron Man 2? We don't blame you if you don't. The MCU has a much better history building its heroes than its villains, but that doesn't mean they haven't ever succeeded. As the films have grown, so has their ability to create more nuanced and balanced characters on both sides of good and evil, and there are now excellent villains to match the equally excellent heroes. Who knows, maybe in time, Thanos would take the top spot—but for now, here is a ranking of the 10 best villains from the MCU.

NOTE: This list is ranked, and only includes feature films in the MCU, not any of the television shows (though the Purple Man/Kilgrave from Marvel's Jessica Jones does deserve a special shoutout).

The MCU rarely ever goes full comic-book with its villains, but with Red Skull, it's really hard to avoid going a bit over-the-top and cartoonish. After all, he is a man with a red skull for a head. But if you're going to go full-on villain mode with only the purest of evil motivations, you might as well go all out with Hugo Weaving's absolutely frightening performance. Red Skull is the perfect villain for Captain America's first outing—he was evil personified, and while he isn't relatable, he is what you want your hero to destroy. Side note: Timeline-wise, he did bring the Infinity Stones into play, so thank him for the rest of the MCU!

There's not a lot of backstory about Kaecilius, a sorcerer who chooses to use his powers for destruction, but Mads Mikkelsen is such a perfect villain in every sense of the word. From his disarming disposition to his creepy manner of speaking, Kaecilius shines when he's put into a magical battle with Tilda Swinton's Ancient One and Doctor Strange (Benedict Cumberbatch) himself. You'll be impressed with the visual design of Kaecilius' makeup and the way they used his powers (that New York scene!). Kaecilius may not have been the most fleshed-out baddie, but he is definitely one of the most unique villains in the MCU.

The Russo Bros. nailed it by casting Hollywood legend Robert Redford as a S.H.I.E.L.D. bigwig revealed to be a HYDRA operative all this time. He was charming and believably good at first, and then he just does a complete 180, and, next thing you know, you want to smash Redford's face in. Pierce's turn in Winter Soldier works because it's still a fun surprise, even if you see it coming. His plans are indefensible and the heartbreaking feeling of seeing someone you trust go, “Hail Hydra” is quite the feeling. His actions exploded the MCU from its very core, and for that, we are thankful.

7. The Grandmaster from Thor: Ragnarok

Okay, so The Grandmaster wasn't the major villain in Thor: Ragnarok, and in the overall scheme of things, he doesn't really have much effect, but nevertheless, there is no denying The Grandmaster left a huge impression. As a minor antagonist of Ragnarok, the Grandmaster is the ridiculous ruler of the planet Sakaar, where he holds massive gladiator battles (where we get to see Thor face off against Hulk) and melts people with his melting stick. He's off-putting yet delightful, and wonderfully strange, that even if he is killing and maiming people, you can't help but love him. And of course, Jeff Goldblum plays him even more perfectly than anyone could have imagined.

5. Ego from Guardians of the Galaxy Vol. 2

Ego the Living Planet is a strange one, as his motivations are kind of wacky, and he isn't exactly the most menacing villain, but what truly makes Ego work is Kurt Russell and his relationship with Star-Lord a.k.a. Peter Quill a.ka. Chris Pratt. The chemistry between Russell and Pratt as father and son was comedy gold, and the way Ego goes from newfound doting father to power-hungry maniac was done smoothly and believably. Not just that, but Ego's powers seemed limitless, allowing for some great visual moments in an already visuals-heavy film.

Every second Cate Blanchett was on screen, you could not take your eyes off her. Oozing with confidence and delicious destruction, Blanchett's Hela—Thor and Loki's long-lost sister—proved that evil could look very, very good. Yes, she's a bit one-note in her path to domination, but Blanchett moves through it with such symphonic hell-bent violence that you love Hela for it. It was truly horrifyingly magical watching Hela destroy Thor's hammer Mjolnir with one hand, and then take over Asgard with commanding force. The MCU's first major female villain is one of their very best.

3. The Vulture from Spider-Man: Homecoming

The idea of the Vulture from the comics isn't very exciting, but the way he was used in the MCU was nothing short of brilliant. A regular joe family-man just working to protect his family, Adrian Toomes-slash-The-Vulture is relatively low-key compared to MCU's other villains, but that's what makes him so good. He is a villain with a legitimate reason to exist with his livelihood taken away and the need to protect his family—but he's still quite the scary dude. It's even scarier to think the most frightening time Vulture is on screen is when he's not in costume, and he slowly figures out Peter Parker's secret. It's one of the most tense moments in MCU, and thanks to Michael Keaton, the Vulture surprisingly now stands among Marvel's best.

Like The Vulture, villains with a legitimate, understandable purpose—none of this destroy-the-world nonsense—makes for the best kinds of villains. Erik Killmonger, played with cool destructiveness by Michael B. Jordan, is MCU's best example of this. There have even been debates whether or not Erik was actually the one in the right. Maybe Wakanda should have been sharing its resources with the world—look what could have been done! True, he went about it a wrong way—what with murder and a general desire to just make a mess of things—but it's hard to not see where Erik is coming from, and Black Panther showcases this perfectly.

1. Loki from Thor, The Avengers, Thor: The Dark World, and Thor: Ragnarok

There really is no one else that could take the mantle of best MCU villain right now except for the God of Mischief himself, Loki. While yes, Tom Hiddleston's trickster and brother of Thor straddles the line and has less interesting things to do nowadays, Loki was the stuff of legend during the first two Thor movies as well as the first Avengers flick. A fully formed character who was both terrifying and hilarious, Loki made you want more from the villains and less from the heroes. He is a complicated emotional mess but also a competent and unpredictable antagonist, and amongst all the villains, has the most layers. You love him, you hate him, you want more of him, and that is why he is the MCU's best villain yet.

Marvel Cinematic Universe Top 10 Villains Avengers Marvel
Your Guide to Thriving in This Strange New World
Staying
In? What to watch, what to eat, and where to shop from home
OR
Heading
Out? What you need to know to stay safe when heading out