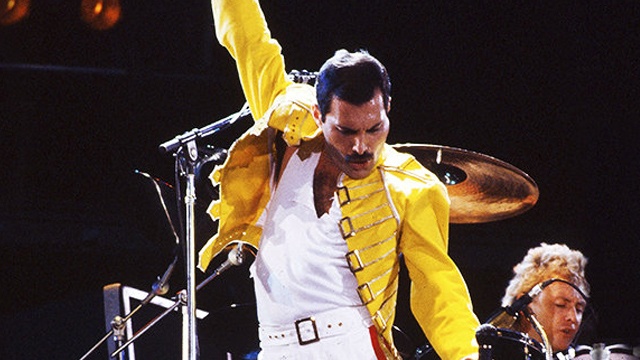 A.k.a. the new film about famous frontman Freddie Mercury.

(SPOT.ph) There's already an upcoming musical about Eraserheads and we already know which of their classic hits we're looking forward to hearing. But now, music fans have another thing to look forward to: Bohemian Rhapsody, a biopic about legendary rock band Queen's just-as-famous frontman, Freddie Mercury.

The film, which stars Rami Malek as Mercury, is set to premiere in the Philippines on October 31. It'll tell the story of the band's 15-year journey from their formation up to their performance at Live Aid in 1985. The teaser trailer already shows a quick preview of a few songs that will be included in the movie (and you can already tell Malek's got award nominations coming his way). You know the movie's in great hands because Queen's drummer Roger Taylor and guitarist Brian May serve as music producers. But before you see all the ovation-worthy performances on the big screen, we list down 10 classic Queen songs we're looking forward to hearing in the highly anticipated movie—aside from the eponymous title, of course.

"Another One Bites the Dust"

This song is actually inspired by a documentary about the St. Valentine's Day Massacre in 1929. "Biting the dust" is a metaphor for death, after all. Paradoxically, the song has also been used to train people about CPR. The song has the ideal number beats per minute—around 100 to 120, just like the Bee Gees' "Staying Alive"—that help when performing CPR. Other than helping save lives, the song also became a worldwide hit, making it to the music charts in 17 countries and eventually becoming the bestselling Queen record in the United States.

David Bowie and Queen were supposed to work on a few songs together in the studio, but Bowie wasn't satisfied with his performance so it didn't push through. Instead, he had an impromptu jam session with the band in the studio, which eventually led to (again, paradoxically) a song called "Under Pressure."

"We Are the Champions"

No song about winning is as unifying and chills-inducing as this song. (DJ Khaled's "All I Do Is Win" can step aside.) And that's what Freddie Mercury had in mind when he wrote this song. Even if it didn't reach the top of the charts, scientists consider it to be the catchiest pop song ever based on a study.

If you're thinking this song gives you some old-school Elvis Presley vibes, that's because Mercury actually wrote it as a tribute to him. And if that's not cool enough, it only also took him around five to 10 minutes to write the song. It became Queen's first top single on the Billboard Hot 100 in the United States, no big deal.

"We Will Rock You"

"I Want to Break Free"

This song became well-known for its controversial music video, which features the members of the band dressed in women's clothing and doing a parody of a soap opera called Coronation Street. You'll see Mercury as a housewife singing about wanting break free. You can fill in the blanks yourself.

There's always that feel-good vibe whenever you hear the first few lines of this song that sound like a choir of angels are singing along with Mercury. But here's a fun fact: The whole record actually just uses three voices—Mercury's, May's, and Taylor's—layered on top of each other.

Before there was Sir Mix-A-Lot's "Baby Got Back," Meghan Trainor's "All About That Bass" and Nicki Minaj's "Anaconda," there was "Fat Bottomed Girls." It was released on the A-side of their other song, "Bicycle Race," which is why there's a lyric that says, "Get on your bikes and ride."

If you've ever wondered where pop star Lady Gaga got her name from, then look no further than this song. Taylor got inspired to write the song about television's rise in popularity over radio when he heard his son say "radio ca-ca," referring to a bad song playing on the radio. (Ca-ca means poop, btw.) It reached the top of the charts in 19 countries—not bad for a song about excrement.

"The Show Must Go On"

There's nothing more heartbreaking than finding out that this song is actually about Freddie Mercury himself. May wrote the song about their frontman, who was getting weaker and weaker because of his battle with HIV/AIDS. May even doubted that Mercury would be able to sing the high parts of the song given Mercury's health at the time. But Mercury said, "I'll f*cking do it, darling," downed a shot of vodka, then proceeded to nail it.

Bohemian Rhapsody Rami Malek Queen
Your Guide to Thriving in This Strange New World
Staying
In? What to watch, what to eat, and where to shop from home
OR
Heading
Out? What you need to know to stay safe when heading out