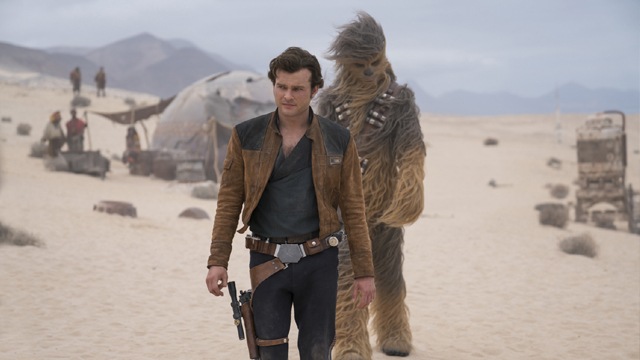 MOVIE REVIEW: Solo Is the Star Wars Movie We Deserve But Not the One We Need Right Now

(SPOT.ph) Solo: a Star Wars Story is a movie that nobody asked for. But upon Disney’s acquisition of the Star Wars property from Lucasfilm in 2012 for U.S. $4.05 billion, fans started looking forward to a movie set in the Star Wars universe every year. One of those stories was Solo, an origin story for everybody’s favorite scruffy-looking smuggler. A spin-off prequel set slightly askew of the main narrative following the saga of the Skywalker family, as well as the decidedly not-Skywalker new generation that includes mononymous Rey (like Cher or Madonna), Solo is a story that occurs before the events in A New Hope.

Solo’s development was rocky, with directors Phil Lord and Chris Miller (Lego Movie, 21 Jump Street) being fired midway into production and Oscar-winning veteran and George Lucas pal Ron Howard (A Beautiful Mind, The Da Vinci Code, American Graffiti) brought in to clean up the mess. Lord and Miller are credited as executive producers for their work, but their exit marred whatever expectations any fans might have had for a film that didn’t ask to be made. Word also got out about lead actor Alden Ehrenreich needing an acting coach to act more like Harrison Ford—a rumor that didn’t sit well with fans who felt Ehrenreich looked more like a young DJ (Benicio del Toro) from The Last Jedi and who felt Canadian actor Anthony Ingruber’s YouTube audition nailed Ford perfectly. Even the film’s marketing was embroiled in controversy when an artist claimed that the movie posters were ripped off wholesale from album covers he made for Sony Music. Overall, expectations were set very low for this installment in the Star Wars franchise.

The good news: Solo: A Star Wars Story is not a terrible film. Written by Lawrence Kasdan, who wrote The Empire Strikes Back—arguably the best Star Wars film—and his son Jonathan, Solo is a perfectly safe, fun, but ultimately forgettable addition to the new Disney Star Wars canon. Ehrenreich is no Harrison Ford, but he delivers the minimum required performance for you to suspend disbelief and accept that this whippersnapper would eventually grow up to be the swaggering scoundrel we all know and love. 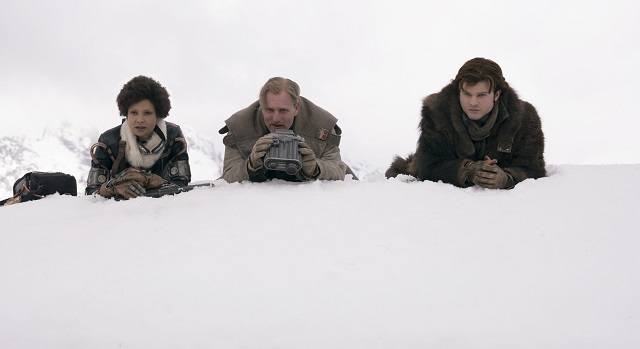 The film opens on Solo’s home world of Corellia, where we learn that he’s a "scrumrat" under the employ of a heliophobic chilopodan mob boss named Lady Proxima (Linda Hunt). Solo flees Corellia, unwillingly leaving behind the love of his life, fellow scrumrat Qi’ra (Emilia Clarke) who, regardless of whether she’s been in the sewers or through a firefight, always looks perfectly coifed and made-up. Qi’ra throws a monkey wrench into the Star Wars fandom’s OTP of Han Solo and Princess Leia because much remains unresolved, and there are more questions than answers, especially at the end of the film. In this regard, Qi’ra is the story’s weakest and most unsatisfying point.

Solo is best enjoyed with a healthy knowledge of past Star Wars films, because Kasdan peppers it with the origins of Han Solo’s trademark affectations, quips and manner of speech. We learn that Solo’s use of "kid" is actually appropriated from his one-time mentor, the ruffian Tobias Beckett (Woody Harrelson). He's otherwise known to diehard fans as Not-Garris Shrike, who is the man who raised Han Solo in the Star Wars expanded universe. Still, in what seems like an homage to the non-canon universe, Beckett’s partner Val (Thandie Newton) laments in one scene how they should’ve gotten more capable help than Solo and Chewbacca (Joonas Suotamo) by invoking the "Zahn Sisters."

If there’s anything Star Wars films are good at, it's repetition. The hallmarks of the cyclical storytelling of every trilogy’s beginning, from Phantom Menace to A New Hope, and retreaded with veneration by JJ Abrams in The Force Awakens, show up here. Howard delivers the familiar beats we expect along with a few pleasant surprises, such as a Warwick Davis (Return of the Jedi, Willow) cameo. And because it’s tradition, Ron Howard’s brother Clint appears in a cameo, too. In case you’re wondering, yes, the Millennium Falcon is referred to a piece of junk at one point. It’s as though Howard and the Kasdans were ticking off a checklist of nostalgic key points like a game of dejarik holochess and the use of a "thermal detonator"; and answering questions nobody ever thought to ask, such as, "How did he get the name 'Solo'?” or “What was the Kessel Run?” It did, however, definitively settle the debate about whether Han shot first—a callback to the infamous scene alteration in the original Star Wars movie. 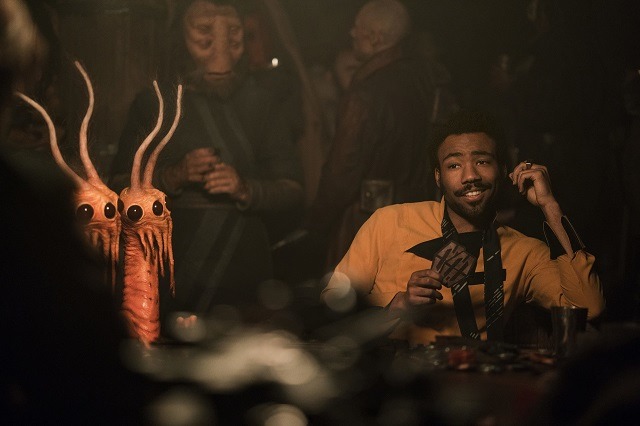 The movie does a passable job of stringing together a threadbare plot and tacking on both familiar and new characters such as Lando Calrissian (Donald Glover) and his activist droid first mate L3-37 or Elthree (Phoebe Waller-Bridge). One legitimate complaint is that Solo doesn’t give us enough Childish Gambino (Glover's alter ego) and Elthree, his smart-aleck and sort-of love interest. We’re also given a blandly generic, facially-scarred mob boss named Dryden Vos (Paul Bettany), head of the criminal organization Crimson Dawn, who hires Solo, Calrissian, Elthree, and Beckett's band of antiheroes to procure the extremely valuable (yet somehow ridiculously easy to steal with minimal planning and manpower) coaxium—also known as hyperfuel.

Perhaps the most egregious fault of Solo is that in revealing Han Solo’s backstory, it dulls the myth behind the man. When we find out that Han is basically Oliver Twist with dreams of becoming the best pilot in the galaxy not unlike his pal Luke, or find that he’s always been a good guy who’s always cared for other people. It takes away from his development in the original trilogy. Part of Han Solo’s appeal is his mysterious past, as fans are left to fill in the gaps with the swashbuckling and derring-do only hinted at in nuggets of conversation. With an entire film devoted to explaining the Kessel Run, all the mystery sheds off.

That being said, Solo is actually more enjoyable than it had any right to be. Unburdened with the Jedi legacy and armed with the narrative security of its central characters living to see the rest of saga, Solo is free to just be a wildly entertaining jump through hyperspace. With Star Wars veteran Kasdan penning the script, Solo indulgently picks up established lore and enriches it, making the experience as comfortable as—in the words of mullti-limbed pilot Rio Durant (Jon Favreau)—sleeping on a Wookie’s lap. Because it’s utterly safe and builds upon the past instead of tearing it down, Solo should be a soothing balm for some fans burned by The Last Jedi’s deliberate, subversive effort to "kill the past." Audiences had better buckle up, because the ending seems to indicate that Solo seems to be gearing up for a Duo.

Solo: A Star Wars Story is out in theaters on May 23.

Alden Ehrenreich Donald Glover Solo: A Star Wars Story Movie Review George Lucas Solo Star Wars
Your Guide to Thriving in This Strange New World
Staying
In? What to watch, what to eat, and where to shop from home
OR
Heading
Out? What you need to know to stay safe when heading out