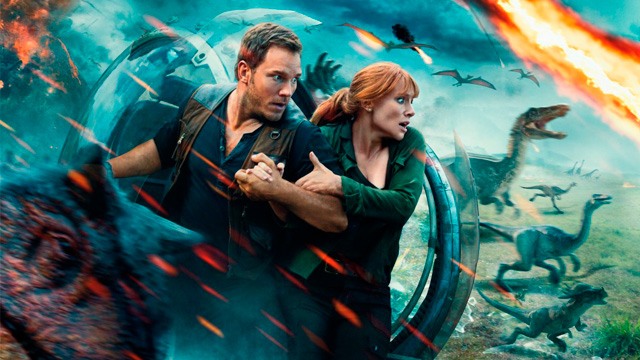 (SPOT.ph) If you’ve had more than enough of battling comic-book heroes and rogue smugglers in space, don’t worry because June promises new movies that will cater to just about anyone and anything. This month, expect the rampaging return of dinosaurs, a Met Gala heist, and a sequel that will take you back to your childhood. Ready your popcorn and pencil in these release dates, Spotters!

Take a trip back to Isla Nubar in this exciting sequel to the 2015 monster hit. Taking place three years after the destruction of the Jurassic World theme park, the new movie has Chris Pratt and Bryce Dallas Howard trying to rescue the remaining dinosaurs from a catastrophic volcanic eruption. Along the way, they encounter terrifying new breeds of dinos that threaten to destroy the world.

June also happens to be Pride Month, which makes this particular Netflix film a fitting addition to this month’s movie lineup. Alex (Daniel Doheny) is a high-school senior whose plans to lose his virginity to his girlfriend go awry after he meets a handsome gay boy from across town. If you enjoyed Love, Simon, this charming coming-of-age tale about self-discovery should be right up your alley.

We’re always excited when a promising reboot hits cinemas—especially when it features an all-female cast of epic proportions. Fresh from her prison stint, Debbie Ocean (Sandra Bullock) gathers a team of talented ladies to attempt the biggest and most ambitious heist of their lives: Stealing from the glitzy Met Gala. The star-studded cast also includes Cate Blanchett, Anne Hathaway, Mindy Kaling, Helena Bonham Carter, and Rihanna.

It may have taken almost 14 years and many Pixar films in between, but the sequel to The Incredibles is finally here! Now set in a world where superheroes are forced into hiding, Elastigirl (Holly Hunter) is called to spring into action and save the day while Mr. Incredible (Craig T. Nelson) faces his biggest foe yet: Staying home and raising their three superhero kids.

If you find yourself needing a dose of feel-good, lovey-dovey rom-com, your (and Chrissy Teigen’s) prayers have been answered! Two overworked assistants (Zoey Deutch and Glenn Powell) attempt to make their lives easier by bringing their workaholic bosses (Lucy Liu and Taye Diggs) together. Naturally, a hilarious meet-cute and plenty of hijinks ensue. The movie starts streaming on Netflix this June 15.

Dubbed as one of the scariest (and for some, even traumatic) horror movies this year, Hereditary centers on a family coping with the death of their reclusive grandmother. What follows is a horrifying discovery about long-kept family secrets that they’ve inherited.

Netflix has picked up China’s box-office smash, Us and Them, to premiere on the platform this month. Helmed by actress and first-time director Rene Liu, the movie follows a heartbreaking love story that spans 10 years! It all begins when two strangers meet on a train home for Chinese New Year.

Tag used to be a fun game you played as a kid, but now it’s an entire movie! Don’t write it off just yet, though. This comedy is based on a 2013 article from The Wall Street Journal about a group of childhood friends who have played an increasingly elaborate game of tag for 23 years. In fact, they’re so dedicated to their tradition that they’ve incorporated it into their adult lifestyles. The entertaining film stars Jeremy Renner, Ed Helms, Jon Hamm, Hannibal Buress, Isla Fisher, and more.

Based on true events, Adrift revolves around two avid sailors (Sam Claflin and Shailene Woodley), who set out on a romantic journey across the Pacific Ocean and inadvertently sail directly into a hurricane.