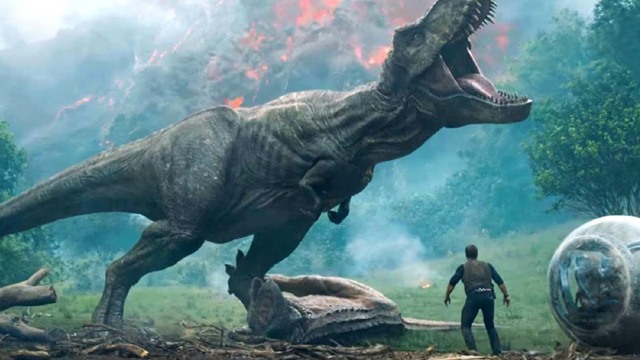 MOVIE REVIEW: Jurassic World: Fallen Kingdom Packs a Lot of Bite, But Not a Lot of Punch

Chris Pratt and Bryce Dallas Howard return to the island in this sequel to the 2015 mega-hit, Jurassic World.

(SPOT.ph) Jurassic World opened to mixed reviews when it rebooted the franchise in 2015, but that didn't stop the dinosaurs from devouring the box office and eventually becoming one of the most successful films ever. The movie had a lot of great ideas, most especially the realization of the actual theme park. That awe and amazement that came with the original was felt once again as we were taken on that tour around how the park was now fully realized, with rides, petting zoos, and incredible attractions. That alone saved Jurassic World from being a boring retread of the original.

Jurassic World: Fallen Kingdom, unfortunately, lacks any of that wonder. It all feels like we've done this before with the dinosaurs—meeting the huge creatures for the first time, the "created" dino, and the big dinosaur vs. dinosaur battles. What Fallen Kingdom does have is a style all its own, thanks to director J.A. Bayona, who's use of horror and a shift to a smaller scale really allows for a change in experience, making Fallen Kingdom worth the return ticket, at least for a short time.

The movie is set several years after the events of Jurassic World where the created dino-mash-up Indominus Rex started a destructive chain of events. This led to a park shutdown and the deaths of many and a debate has stormed up in the government about saving—or not saving—the dinosaurs left on the park. The debate heats up, quite literally, as a volcano on the island is set to erupt and wipe out all the dinosaurs still alive. Claire (Bryce Dallas Howard) now runs the Dinosaur Protection Group a.k.a. the DPG, an activist group trying to save the de-extinct dinos from a second terrible fate.

Claire gets recruited by Eli Mills (Rafe Spall), the head of the Lockwood estate who controls the money of Benjamin Lockwood (James Cromwell), the former partner of original Park creator John Hammond (played by Richard Attenborough in the original series). He plans a team to save several of the species on the island before it goes kaput, and part of the team is raptor trainer Owen (Chris Pratt). Joining the team are hacker Franklin (Justice Smith) and paleoveterinarian Dr. Zia (Daniella Pineda). They make their way back to the island with some military men and as with all of the Jurassic movies go, things don't quite go as planned.

As a whole package, Fallen Kingdom is an impressive film, one that is visually spectacular and has shockingly dark moments with a horror tone that are a welcome injection into this franchise. Bayona, best known for Spanish horror film The Oprhanage and the emotional disaster-drama The Impossible, uses a lot of the horror and thriller techniques he's a genius at. The way he uses mirrors, shadows, darkness, lightning and thunder and stormy nights to produce thrill and scares— particularly in the opening sequence which will probably go down as the most talked about sequence, and a really well-made dino-chase inside a mansion—works so well for something like this. 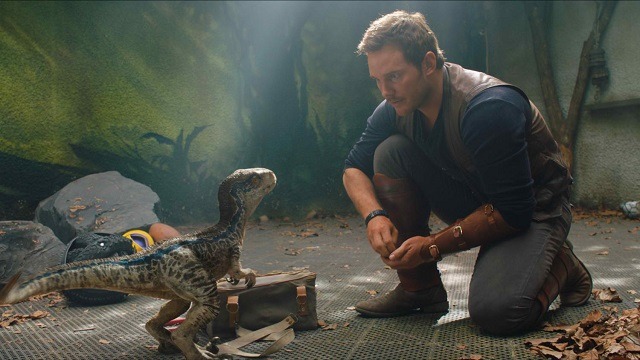 Weirdly, the script interjects it with casual humor and an attempt at Marvel quips during the most horrifying moments that everything comes out comical. Instead of being scared, you're laughing— which works sometimes, but often ruins the mood. Colin Trevorrow's script (he directed the first one, but only wrote this second one with frequent partner Derek Connolly) as well as just the final cut of the film feels like it's trying to be more family-friendly, lacking a lot of punch when emotion could've been brought out more (particularly at the end of the first act, where a poignant moment featuring a dinosaur on the beach occurs). It's not just these parts, it's also just the story in general, which attempts to tread on heavier themes but leaves a lot ot be desired.

The film tackles things like animal trafficking, black market trades, the idea of humans not being able to handle what they create, and always moving towards war and violence, greed, as well as a pretty clever cloning storyline that should've been handled better. It falls a bit flat despite being the most intriguing new "sci-fi" concept introduced but it's never fully explored. It's established, talked about expositorily for a bit, and then it's done. Understandably, the action takes center stage, but it's a shame when these intelligent things are brought up never to be discussed again. The film seems to aim for a Planet of the Apes-type feel at the end (specifically the more recent franchise), but Jurassic has a long way to go to achieve the same smarts that franchise has.

When it comes to the dino-vs-dino brawls, as well as the dino-on-human action, the film does deliver a lot, even if it spends more than half the time keeping the dinosaurs in shackles or cages.  When they're let loose, they go wild—especially with the new created dino, the IndoRaptor which is terrifying on paper and in execution. However, it all just feels like we've done this before, therefore lacking the "jaw-dropping" moments we've had.

Blue, the adorably vicious raptor that Owen trained from Jurassic World, takes center stage here, which is a great choice. We don't spend enough time with her or any of the dinos to really feel that same awe, or inspire that same admiration that the previous films did. Fallen Kingdom pays homage to the first film's Brontosaurus appearance, this time with island newbies giving that same shocked face that so many previous protagonists have done, but it doesn't land the same. However, the opening sequence is really magnificent and so easily the best part of the film. 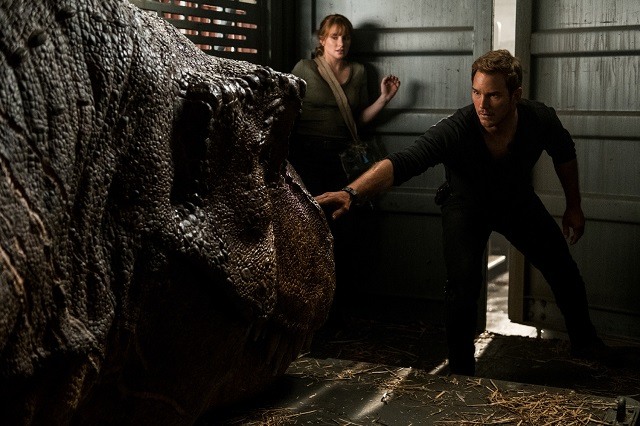 That's nothing against the actors playing in this dinosaur sandbox, though. The aforementioned island newbies like Zia and Franklin are cool, and Pineda and Smith respectively do fine work, but don't leave enough impact. Meanwhile, Pratt is back to his charming self, and Howard has a more assured take on her evolved character. The cast in general is wonderful, as well as the dinosaurs that populate the world, it just feels like this franchise needs something new to really make it relevant and fresh again. The ending does hint at that, but hopefully Trevorrow and co. can handle the future.

Jurassic World: Fallen Kingdom is out in theaters now.