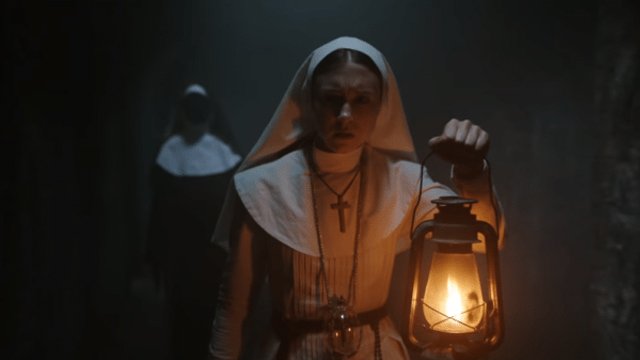 WATCH: The People Behind The Conjuring and It Are Back With Another Horror-Thriller

The Nun will make you want to sleep with the lights on.

(SPOT.ph) It's been a great year for horror fans with the release of some of the scariest flicks like It, Get Out, and A Quiet Place. There's also the upcoming premiere of Hereditary and Suspiria. Even Stephen King's world is coming to life in a TV series.

So, if you really enjoy creeping yourself out and losing sleep over horrifying things you've watched, The Nun is another movie to add to your must-watch list as it's set to premiere on September 6. You just know it's going to be pretty freaky because it's produced by James Wan, the director of The Conjuring and The Conjuring 2. Plus, it's based on a screenplay by Gary Dauberman, the writer of Annabelle and It.

If you're familiar with The Conjuring series, then you probably remember the terrifying nun that came to life from a painting. Well, she's about to be the star of your nightmares once again in this film. In the trailer, novitiate Sister Irene (Taissa Farmiga) narrates how she grew up having disturbing visions of a nun. When the Church heard about it, she was asked to accompany Father Burke (Demián Bichir) to investigate the self-inflicted death of a young nun in a Romanian abbey. In the abbey, Sister Irene walks in a dark tunnel, where the ghost of a nun starts following her—and when she realizes this, she suddenly gets attacked by another nun.

The movie is directed by Corin Hardy (The Hallow) and it's also set to star Jonas Bloquet (Elle), Charlotte Hope (Game of Thrones), Ingrid Bisu (Toni Erdmann), and Bonnie Aarons as the titular nun.

The Nun premieres on September 6.

The Nun The Conjuring Horror