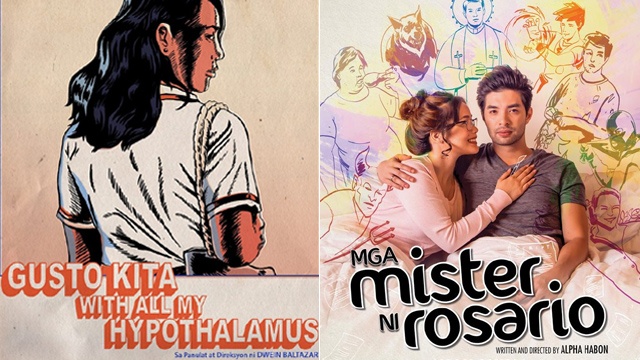 Both full-length features and short films!

(SPOT.ph) With so many great indie films, sometimes it's hard to keep track of all the film festivals where they're being showcased. One of the festivals this year was CineFilipino Film Festival, which ran from May 9 to 15 at select cinemas across the Metro. But if you missed it, here's some good news! Movies from this year’s run of the festival will be screening at the University of the Philippines - Diliman's Cine Adarna from July 9 to 14 as part of CineFilipino: Replay. Presented by the Film Producers Society, the U.P. Cinema Arts Society, the U.P. Cineastes' Studio, and U.P. Cinema, the event's tickets are only at P150 each. That means you can watch more films without burning a hole through your wallet!

To help you pick out which ones you're going to watch first, here are the trailers and synopses of the full-length feature films.

An ill-tempered old actress named Delia (Rosemarie Gil) looks for a family who will take care of her equally stubborn husband Sammy (Jamie Fabregas) before she dies.

Former extra actress Hilda (Elizabeth Oropesa) is 65-year-old con artist. She begs outside malls so she can support her husband, who is afflicted with Parkinson’s disease. Little does she know that Ruel (Matt Daclan), a filmmaker, has been observing Hilda’s M.O. and plans to create a movie out of her life.

Starring Nicco Manalo, Dylan Ray Talon, Soliman Cruz, and Anthony Falcon, Gusto Kita With All My Hypothalamus is the story of four men living in Manila whose lives intertwine as they pine for the same girl, the mysterious Aileen (Iana Bernardez).

At the tender age of 16, Alex (Adrian Cabido) is a part-time gun for hire. Known as "Hitboy," he soon becomes embroiled in the complex world of gangs and police chases.

Starring Edgar Allan Guzman, Jerald Napoles, Miguel Almendras, and Arron Villaflor with Ritz Azul, Mata Tapang is about soldier who lost an eye during battle. This event opens his new "eye" that allows him to see his fallen brothers and accomplish their unfinished business.

Bea (Kate Alejandrino) is the perfect stage wife to her method-actor husband (Joross Gamboa). In fact, she plays along with him while he is in character. But trouble starts when he gets the role of a lifetime—a killer who threatens to murder her.

Claudia (Glydel Mercado) is a devout church servant. After buying the religious image of Saint Vargas, supposedly the patron saint of believers, mysterious and horrible things start to happen around her.

The Eternity Between Seconds

Andres (TJ Trinidad) is a depressive motivational speaker who flies to Korea to finish his latest book. There, he meets Sam (Yeng Constantino), a Korean-Filipino who is about to meet her estranged Korean father for the first time.

Aside from these full-length feature films, short films will also be screened at the UP Film Institute Videotheque during the festival run. Short Films Set A includes the films Luisa and Guada, Rufyla, Binata Na, Boyet Loves You, Tugma, and Si Aponibolinayen at ang mga Batang Lumilipad. For Set B, the movies are .raw, Gabi ng Kababalaghan, Lasingtunado, Amusin Pa, Duyan ng Alon, Ate, Kuya Gusto Kong Kape, and Siyudad ng Bulawan. For Set C, the movies included are Palabas, Happy Birthday Mylene! 2023 Ka Na, Santa Elena, and Mark and Lenny. Tickets per set of short films are at P150 each.

If you still can't make up your mind about which ones to watch, the Film Producers Society will be giving away two festival passes to three lucky winnders. Just join the online contest posted on their Facebook page.