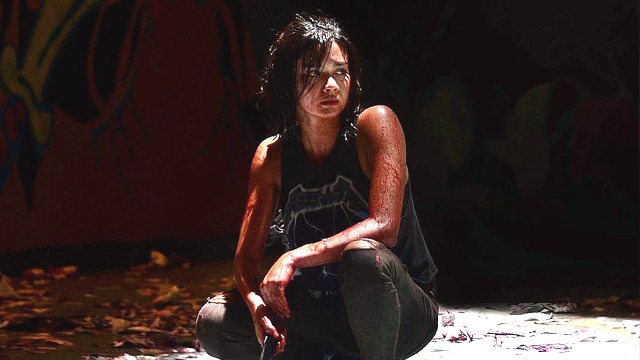 (SPOT.ph) If you need any more proof that Pinoy indie movies are getting better each year, you only have to look at the film festivals—both local and abroad—featuring some of the best that Philippine cinema has to offer. One of them is the upcoming We Will Not Die Tonight, the latest gory action flick from Richard Somes, who also worked on Erik Matti's On the Job. It's set to premiere and open the 17th New York Asian Film Festival on June 29.

We Will Not Die Tonight tells the story of Kray (Erich Gonzales), a stuntwoman and an aspiring actress, who is waiting for her big break. One day, her ex-boyfriend Ramil (Alex Medina) invites her for a "one-time-big-time" chance to score money. The catch? They have to battle it out with the dangerous gang of Bangkil (Paolo Paraiso). Together, they round up their gang of stunt workers— Jonesky (Thou Reyes), Rene Boy (Nico Dans) and Che-che (Max Eigenmann) for one night of bloodbath and survival.

The film was reportedly shot in just eight days, which is already impressive enough. Even more so, Gonzales, Paraiso, and the rest of the cast also had to take Muay Thai and basic knife-fighting lessons to make the action scenes believable. There's no news yet on We Will Not Die Tonight’s Philippine premiere date, but fingers crossed it'll be sooner rather than later. The equally bloody BuyBust, starring Anne Curtis, will hit local cinemas on August 1. Both films will have their world premiere in New York this week.

The festival, which runs until July 15, will be showing six Filipino films in total. These are We Will Not Die Tonight, Irene Emma Villamor’s Sid & Aya: Not a Love Story, Treb Monteras’ Respeto, Mikhail Red’s Neomanila, and Matti’s On the Job and BuyBust.

Thou Reyes Nico Dans Alex Medina New York Asian Film Festival Richard Somes We Will Not Die Tonight Action Movies Max Eigenmann Indie Movies Erich Gonzales Paolo Paraiso
Your Guide to Thriving in This Strange New World
Staying
In? What to watch, what to eat, and where to shop from home
OR
Heading
Out? What you need to know to stay safe when heading out