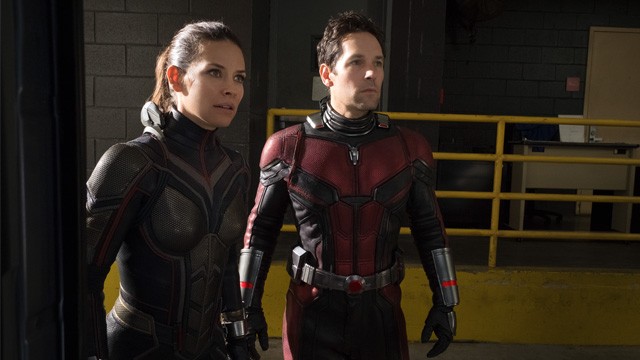 It's a huge improvement over the first Ant-Man movie.

(SPOT.ph) It’s almost never a good idea to watch films from the first few rows of the theater. In an IMAX cinema, with a screen the size of a small building, it’s downright terrible. Unless you’re watching Ant-Man, that is. The sequel, Ant-Man and the Wasp, comes to theaters this July 4, and might possibly be the first movie that makes sitting on the front row of an IMAX theater enjoyable because it makes viewers feel absolutely tiny. It’s something of an immersive experience that makes one feel like, well, an ant.

The sequel to the 2015 Marvel movie about a B-list superhero who can shrink (and sometimes grow) picks up two years after the events of Captain America: Civil War. Scott Lang (Paul Rudd) is under house arrest for aiding the fugitive Cap—explaining Ant-Man sitting out the fight against Thanos in Avengers: Infinity War—and days removed from his freedom when he gets called to action by Hope Van Dyne a.k.a. the Wasp (Evangeline Lilly) and her father, Hank Pym (Michael Douglas), the original Ant-Man. Father and daughter are on a mission to find Janet Van Dyne, the original Wasp (Michelle Pfeiffer), who shrank to sub-atomic size and got marooned in the quantum realm. 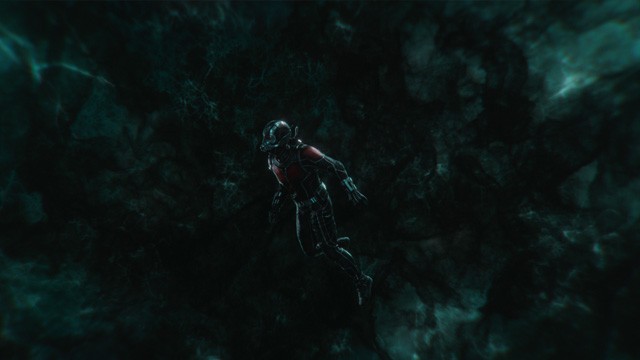 The quantum realm is an alternate dimension in the Marvel universe where concepts of time and space are irrelevant. There’s plenty of pseudoscience gobbledygook in Ant-Man and the Wasp, using real scientific concepts like “quantum entanglement” to lend some gravity to the plot. But science is about the weakest part of the film, and it’s best to just give in to the quantum nonsense. In fact, the word “quantum” gets thrown around so much that Lang quips, “Do you guys just put ‘quantum’ in front of everything?”

Hot on the heels of the universe-spanning Avengers Infinity War, Ant-Man and the Wasp is unlike most other superhero films because instead of going epically big, this tale about a diminutive superhero scales down. Ant-Man is no Captain America or Thor thwarting some power-hungry villain or fending off alien invasions: He’s just a doting dad trying to keep things together. The opening sequence establishes Lang as a solid candidate for Father of the Year, driving home the point that Ant-Man is an everyman for whom superheroics is merely something he does on the side. He’s a good dad first, superhero second, but in the eyes of his daughter, it’s one and the same.

While there’s a main antagonist called Ghost (Hannah John-Kamen), who has the quantum phasing (there’s that word again) ability to walk through walls and turn invisible, her motives are less sinister or avaricious than your typical Marvel villain. One might say her mission is a matter of life and death. Reimagined for the big screen, Ghost is a gender-bent version of her comic book counterpart with a vastly different origin story. There’s also Southern, sleazy black market salesman Sonny Burch (Walton Goggins), who’s after Pym’s technology, and FBI agent Jimmy Woo (Randall Park), who’s after Lang and his friends, to complicate things.

Unlike other superhero films, Ant-Man and the Wasp isn’t about stopping bad guys at all. It’s essentially a story about family, about the bond between parent and child, and about reuniting loved ones who’ve been separated by court orders or mystical dimensions. The villains and the FBI are just obstacles in the way of finding the wife and mother who’s been trapped in the quantum realm for 30 years. Meanwhile, Lang faces 20 years of imprisonment if found guilty of violating his house arrest, preventing him from being part of his daughter Cassie’s (Abby Ryder Fortson) life.

It’s the simple, intimate nature of the story that makes it all work. Grand ambitions don’t bog it down, and the most spectacular moments are when it goes sub-atomically small, as viewers get a peek into the quantum realm with scenes that hearken to 1987’s Inner Space. Rudd and Lilly don’t have terrific onscreen chemistry but are so lovable in their roles that it’s hard not to root for them. Hope and Scott have cooled their relationship since the events of the first film, a result of Ant-Man running off to fight in Germany without the Wasp and consequently making her and her father wanted criminals for using their tech. Seeing them reignite their relationship as they work together once again provide the requisite rom-com elements.

After the grim events of Infinity War, and after some heavy Marvel moments such as Captain America: Civil War and Winter Soldier, Ant-Man and The Wasp is a refreshing break. Michael Peña returns as Scott’s ex-con buddy Luis along with their crew Dave (Tip “T.I.” Harris) and Kurt (Dave Dastmalchian) to provide comic relief that complements Burch’s bumbling mobster crew and the well-intentioned agent Woo who just isn’t meant to succeed. Lawrence Fishburne also appears as Pym’s former associate, Bill Foster, who’s known in the comics as Black Goliath. The unpredictable Foster is one of the more nuanced characters in the film and it’s almost a shame he plays such a small part in an already overcrowded story. 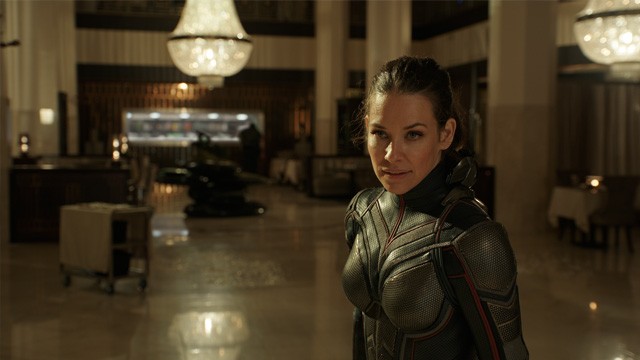 The Wasp is the first female superhero to co-headline a Marvel film and director Peyton Reed, who also helmed the first outing, makes sure to show that she’s every bit the hero as other leads in the Marvel Cinematic Universe. Armed with her physicist intellect, wings, blasters, and acrobatic martial arts skills, Hope Van Dyne is several magnitudes more capable than the goofy, physically less impressive Scott Lang. Wasp is played straight and serious while Ant-Man feels a lot like a sidekick in his own film, and it’s perfectly fine. In a Marvel Cinematic Universe (MCU) populated by alpha males who take pissing contests whenever they meet, Lang’s affable charm sets him apart. In fact, Ant-Man is more in touch with his feminine side than any other male Marvel hero, as evidenced by one of the movie’s best scenes where Scott channels his inner Janet.

Ant-Man and the Wasp is loaded with more visual gags than the one-liners Marvel movies are known for, and Reed runs away with the conceit of making things big and small on command. A solid improvement over its predecessor, the film has more heart and frenetic action, as well as emotional punches that hit where it counts. Watch out, especially, for the mid-credits scene that ties the film neatly into the rest of the MCU and makes the audience collectively gasp.

Ant-Man and The Wasp is out in theaters on July 4.

Ant-man And The Wasp Movie Review Evangeline Lilly Ant-man Paul Rudd Michael Douglas
Your Guide to Thriving in This Strange New World
Staying
In? What to watch, what to eat, and where to shop from home
OR
Heading
Out? What you need to know to stay safe when heading out