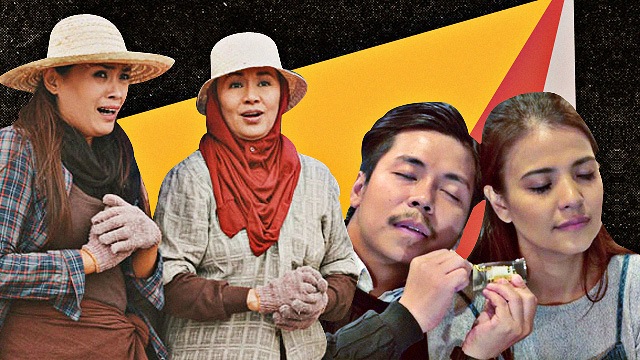 (SPOT.ph) Film festivals throughout the year feature some of the best that Philippine cinema has to offer. They have screenings of independent films for a week or two at select cinemas. But that set-up sometimes makes it difficult to catch these movie gems on the big screen, which is where streaming services come in handy. Now, all you need is a good Internet connection, some snacks, and you’re all set for a movie marathon with these 10 great local indie films.

Viewers may not know Lilia Cuntapay’s name, but they definitely know her face—she’s been appearing as a bit player (a.k.a. extra) in various horror films for over 30 years. But not once has she been nominated for an award. This mockumentary follows the fictional story of Cuntapay being up for a Best Supporting Actress award. In real life, Six Degrees of Separation from Lilia Cuntapay finally earned Cuntapay the Best Actress award at the Cinema One Originals Digital Film Festival in 2011.

Andrea (Lovi Poe) is at her wedding, ready to get married to Robert (TJ Trinidad). But the festivities are put to a halt when she spots a man with a camera (Paulo Avelino), who triggers her memories of a past love she once had. The movie won Best Film at the 2013 Cinemalaya Independent Film Festival.

Red's (Jericho Rosales) best friend Ton (Nico Antonio) serves as the narrator of this film set in Bacolod, as he tells the audience about the story of Red’s life. Red grew up under the guidance of Molo (Pepe Smith), a nightclub owner who treats him as if he were his own. He then meets and falls in love with Mai (Mercedes Cabral). Red also works as an underground fixer—meaning to say, he fixes everyone’s problems from debts to cars and everything in between. But eventually, he gets framed for something he was trying to fix and now his life is at stake.

Vilma Santos is known for her many lead roles—but in this indie film, she plays Loida Malabanan, a bit player in a soap opera. This drama-comedy follows a day in the life of Loida as she works long and harsh days on sets with big-name stars (like Piolo Pascual and Cherie Gil) while dreaming of her big break as an actress. The film’s funny-but-realistic premise also makes for a great social commentary on the struggles of those who work as background actors.

Lorna (Shamaine Buencamino) is a 60-something woman who’s looking for a new romantic adventure. She finds some excitement with an online boyfriend and an old flame who picks up the pieces when things don’t work out. Lead actress Buencamino is joined by fellow veterans Mira Isabel Lopez and Raquel Villavicencio (and even award-winning director Lav Diaz makes an appearance) in this funny coming-of-old-age movie.

Eme, the long and winding road from Quezon to Bicol, is known to travelers and locals for its challenging and zigzag terrain—which is why it’s nicknamed Bitukang Manok. Its real-life notoriety makes it a great setting for a horror flick that revolves around three groups of strangers all trying to make their way through the road until they realize that they’re just going around in circles, with hours spent figuring things out quickly turning into days. When they run out of food and water, the supernatural takes a back seat and they become more scared of each other.

This comedy tells the story of Carlo (Dino Pastrano), a 29-year-old graphic artist with no aspirations in life and only wants to hang out and play music with his friends who also lack ambition. But #relatable life story aside, there’s also a funny love-hate romantic tale and playful family relationship thrown in the mix. This movie also stars Ricky Davao and Cherie Gil.

The film follows the story of four street children and their everyday struggles living in the slum areas of Manila. With their cardboard beds and creeks-turned-playgrounds, they fight for the simplest of needs like water and food. Filmmaker Ralston Jover uses magic realism to drive home the heartbreaking story of the four kids and how their world is turned upside down by one event. Hamog won the Outstanding Artistic Achievement at the Shanghai Film Festival in 2016.

This quirky rom-com features the surprise-hit love-team of Alessandra de Rossi and Empoy Marquez as Lea and Tonyo, respectively. Lea is a tour guide in Japan who suffers from temporary blindness. Her neighbor Tonyo is there to help her get around and what ensues is a sweet but complicated romance between the two characters. After four weeks in cinemas, Kita Kita eventually became the highest-grossing Pinoy indie film with P300 million at the box office.

This film—which not only won Best Film at the 2016 Tokyo International Film Festival but also became the Philippines’ official entry to the 2018 Oscars—is the first Filipino film to be released on Netflix. It tells the story of Maya (Mary Joy Apostol), a farmer’s young daughter who accidentally shoots an endangered Philippine eagle. The police start investigating poachers of the animal, but instead stumble upon something more horrific.