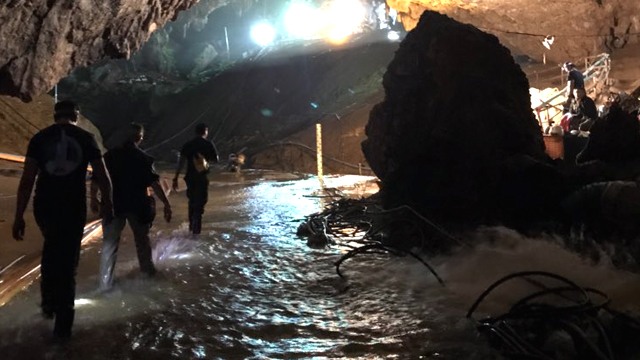 Including one from the director of the upcoming Crazy Rich Asians movie.

(SPOT.ph) The rescue operations for the 12 boys and their coach who went missing in the caves of Northern Thailand only ended on July 11—but it doesn't take ESP to be able to predict that there are production companies already eyeing the story for a possible feature film. One of them is Pure Flix, which is an independent film and television studio based in Arizona that describes themselves as producers of "Christian and family-friendly" content. The other is Ivanhoe Productions, another production company with principal offices in cities like Los Angeles, Hong Kong, and New York, and branches in Singapore and London.

The CEO and managing partner of Pure Flix, Michael Scott, posted a video on Facebook on June 10, saying that he was in Thailand to secure rights for the story about the daring and heroic rescue that was happening at the time. He was near the rescue site while the video was being filmed. "We’re just kinda here witnessing the events, gathering some contacts and everything to really tell a story about the international effort—the entire world coming together to save 13 kids trapped in this Thai cave."

I refuse to let Hollywood #whitewashout the Thai Cave rescue story! No way. Not on our watch. That won’t happen or we’ll give them hell. There’s a beautiful story abt human beings saving other human beings. So anyone thinking abt the story better approach it right & respectfully.

We have the power to not only MAKE history but be the historians that RECORD it too. So that it’s told correctly and respectfully. Couldn’t just sit here watching how others would “interpret” this important story. https://t.co/kRv5k9plDU

Meanwhile, the director of the highly anticipated Crazy Rich Asians, Jon M. Chu, took to Twitter to voice out his fears about the story being potentially whitewashed if it were to be adapted into a movie. According to Deadline, the president of Ivanhoe Pictures, John Penotti, is in talks with the government and Navy of Thailand to produce the film. Chu is reportedly set to direct it.

The 12 boys—aged 11 to 16—and their 25-year-old coach were declared missing on June 23. They were exploring the Tham Luang cave when it suddenly flooded because of the monsoon rains. They were forced to go further into the cave system in search of higher ground and were found alive 10 days later on July 2. The first four boys were extracted from the cave on July 8, the next four were extracted on July 9, and the remaining four boys and the coach were rescued on July 11, 18 days since they went missing. They are all currently recovering in a hospital.

Jon M. Chu Thai Cave Rescue Crazy Rich Asians
Your Guide to Thriving in This Strange New World
Staying
In? What to watch, what to eat, and where to shop from home
OR
Heading
Out? What you need to know to stay safe when heading out