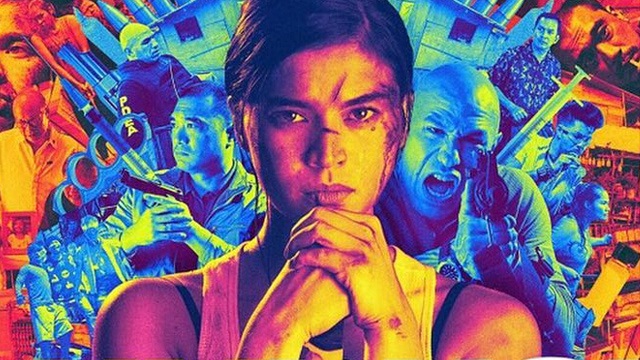 It's also set to stream on Netflix!

(SPOT.ph) It looks like the long wait has been worth it. After years of preparation (production began in mid-2016) and after pushing back the premiere date (it was supposed to hit theaters in February), the highly anticipated action-thriller from Erik Matti, BuyBust, finally premiered at the New York Asian Film Festival on July 15 as the festival's closing film. It's set to premiere in Philippine theaters on August 1.

While the mere fact that it was selected to close the prestigious festival is already worthy of celebration, it's even better news that the film has received praise from critics who watched its international premiere. It was also graded A by our very own Cinema Evaluation Board.

BuyBust revolves around Philippine Drug Enforcement Agency (a.k.a. PDEA) agents who are tasked with a mission to find and infiltrate a drug den in one of the deadliest slums in Manila. But during the mission, the agents—including Nina Manigan (Anne Curtis)—are instead trapped and hunted down by the residents of the area. They're seeking revenge for the civilian casualties that were the result of all of the drug-related operations carried out in their area. Other stars of the film include MMA fighter Brandon Vera, Joross Gamboa, AJ Muhlach, Victor Neri, and Nonie Buencamino.

Richard Kuipers from renowned entertainment magazine and website Variety is all praises for BuyBust, which he calls a "superbly executed action film" in his review. Kuipers also notes Matti's direction, saying that he "delivered an explosive exercise in kinetic cinema that also offers potent commentary on the devastating social consequences of the Philippine government’s war on drugs."

Aside from Matti, Kuipers also talks about the lead of the film, Curtis, whom he notes is taking a break from her usual roles in rom-com movies. "Curtis is convincing and charismatic as the determined and amazingly resourceful heroine," he says. "Performances from the rest of a huge cast are spot-on, right down to bit parts."

Kuipers also brings up the great work happening behind the camera. "The film’s technical package features stellar work across the board." He continues, "Cinematographer Neil Derrick Bion pulls off any number of mind-boggling tracking shots in narrow alleys and across rooftops that are filled with fight director Sonny Sison’s brilliantly staged mayhem. Topping things off is a terrific score by Erwin Romulo and Malek Lopez that employs everything from Jew’s harp to fuzztone guitar and pulse-quickening drumbeats."

In addition to Variety, entertainment website Screen Daily's John Berra is all praises for the film, which he says is "both brazenly cynical and brilliantly executed." He comments on the movie's intense action sequences set in the urban slums, saying that "the fierce skirmishes in BuyBust are not only sweat-inducing but have pertinent social connotations that transcend the sophisticated mechanics on display." He goes far as saying that Matti "delivered one of the most blistering action pictures since Mad Max: Fury Road (2015) on a fraction of George Miller’s blockbuster budget."

The rave reviews for the film are enough to get movie fans—both international and local—excited for it to hit the big screen. But the best part is, they can also look forward to streaming it after its theater run. According to both reviews, it's set for a worldwide release on Netflix on November 1.