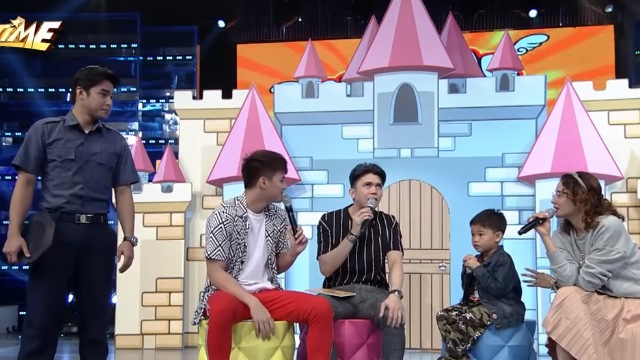 WATCH: This Now-Viral Child Contestant on It's Showtime Is #Woke

The Internet is just as amused as the hosts and audience.

(SPOT.ph) A live TV show usually means you can't control a lot of the things that happen, especially when you have contestants participating in games or segments. What more when those contestants are children? In the July 18 episode of ABS-CBN's noontime program It's Showtime, one of their child contestants, Carl Nathaniel Garcia, left the hosts amused with his comments about the police.

Navarro then asks Garcia what the police do when there's someone who's noisy and causing trouble. "Para po niyang binabaril o di kaya, ano, sinasaktan," Garcia answers, eliciting awkward laughter from the audience. Navarro tries to subvert the comment saying, "Di naman babarilin, aarestuhin lang," to which Garcia agrees. Garcia also says he doesn't know a police officer in real life. He just knows the ones he sees on TV, particularly on the news show TV Patrol.

Garcia's comments eventually made it to Twitter, where social-media users—who were just as surprised—then brought up how woke (a.k.a. socially aware) the child is. Some also brought up the implications of what children see on TV.

See how media could shape and influence a kid's innocent mind to believing everything he/she sees in the television... very bad

Even after the shock and confusion during Garcia's segment, he eventually qualified for the Grand Finals. Who knows, maybe he's got more #woke wisdom to share soon.