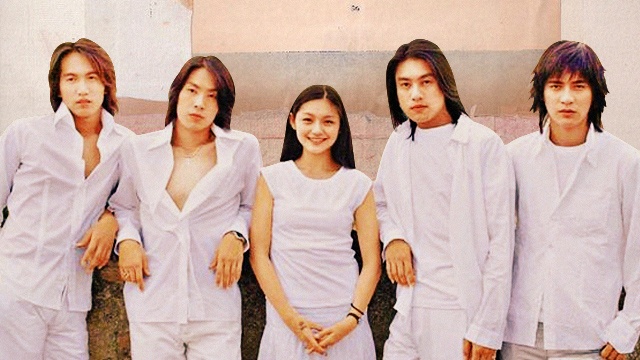 It's a classic for a reason.

(SPOT.ph) Out of all the Asian telenovelas that fans followed and loved, Meteor Garden stills stands out as a cult classic. The Taiwanese drama first aired in 2001 and has won viewers over with the story of Shan Cai and her life with the notorious F4. The well-loved series now has a reboot, which premiered on Chinese television on July 9 and is set to air on ABS-CBN soon.

While fans—both old and new—are sure to get hooked on the remake, we thought we'd look back on the scenes that made Meteor Garden such a hit in the first place. We rank the silliest, most romantic, and most dramatic scenes that you probably still remember to this day—these are the most memorable moments that had us all falling in love with Shan Cai (Barbie Hsu), Dao Ming Si (Jerry Yan), Hua Ze Lei (Vic Zhou), Xi Men (Ken Chu), and Mei Zuo (Vaness Wu). Here's our swoon-inducing, completely subjective list. Which scenes top yours?

Though the show has a lot of funny characters, Shan Cai’s parents are still two of the funniest. While Shan Cai’s bickering parents are looking after her, the Flower Four (F4) inform Dao Ming Si that she’s sick. This prompts Dao Ming Si to head over to Shan Cai’s house, where he’s met by Shan Cai’s screaming mom. The parents then start berating Dao Ming Si, calling him an intruder and demanding that he explain why he’s at their home (they even liken him to a pineapple at one point). They order him to tell them who his father is so they can talk to him about how they raised a child with no manners. When they find out who it is, they hilariously start treating Dao Ming Si like a king.

9. Playing basketball to settle a fight

After Dao Ming Si sees Hua Ze Lei and Shan Cai kiss, he announces that he’s kicking them out of the school. But his sister, Dao Ming Zhuang, suggests that they instead play a game of basketball to decide if Lei and Shan Cai get to stay or not. They team up, with Si’s teammates being Xi Men and Mei Zuo, while Shan Cai plays with Lei and her childhood friend Chen Qing He. Though their team is losing, Lei figures out a way for them to score—by using Si’s jealousy to their advantage.

8. Shan Cai waking up Dao Ming Si as his maid

Dao Ming Si invites Shan Cai to stay at his home after she gets evicted. When they get home, they find out that head maid Yu Sao is in charge of the house since his mother is abroad. Yu Sao permits Shan Cai to sleep at the house—but only if she becomes Dao Ming Si’s personal maid. One of her tasks? Wake Dao Ming Si up in the morning. As always, it’s still all innocent fun, but it’s especially cute seeing the two starting off their relationship.

Though this particular scene is actually from the second season of the show, it's undoubtedly still one of the more memorable ones. From the street, Shan Cai spots Dao Ming Si (who has amnesia and now goes by the name Ah Si) get on a bus. When the bus starts, she runs after it—and she keeps running even when the oranges in her grocery bag are falling to the ground. You can’t help but feel just as hopeless as she is when you see that Dao Ming Si can’t even see or hear her because he's wearing earphones (!). There's nothing more that you want to do than tell her to run faster or tell him to turn around and look.

6. Shan Cai being forced to play the piano

It’s no secret that Dao Ming Si’ parents don’t approve of Shan Cai for their son. So, during a party, Dao Ming Si’s mom invites Shan Cai to play the piano—fully aware that she doesn’t know how. Mei Zuo and Hua Ze Lei try to convince Dao Ming Si’s mom to stop, but to no avail. Shan Cai has to win over their family friends, the mom reasons. Shan Cai starts angrily hitting random notes and the mom starts to get mad, but then she starts playing a piece—the only one she knows—while giving a scathing speech about how being rich doesn’t make one a good person. If there was a mic there, she probably would have dropped it.

This is where it all started heating up—and not in a good way (unless you shipped Shan Cai and Hua Ze Lei). While on a trip to Japan, a heartbroken Hua Ze Lei opens up to Shan Cai about his unrequited feelings for Jing, whom he followed all the way to France. As Shan Cai comforts him by the beach at night, they end up kissing. After the kiss, they turn around and see Dao Ming Si, who immediately punches Hua Ze Lei and tells Shan Cai that she betrayed him. It was probably at this point that you started fighting with your friends about who you wanted Shan Cai to end up with.

While deep in conversation with a tearful Shan Cai, Hua Ze Lei starts doing a handstand. When she asks him what he was doing, Lei answers, “When I was young, a friend taught me that if you can’t hold back your tears, try standing on your hands. That way, the tears that were supposed to come out would stop.” It might seem silly to think about his reasoning now—especially at such a sensitive time—but it’s one of the more heartwarming points of the show.

3. Shan Cai gets a red card

Ah, the red card that started it all. Shan Cai first crosses paths with Dao Ming Si when she shouts at him in defense of her friend. Afterwards, Shan Cai goes to school in fear that she’ll open her locker and see the notorious F4 red card that says, “You’ll be dead,”—which basically means that the F4 and the whole school can bully you. To her relief, there’s no red card in her locker. But Shan Cai notices that people are avoiding her and soon, she realizes that the red card was attached to her back the whole time. It’s a simple scene, but it’s where everything began.

2. Dao Ming Si gets beaten up

Dao Ming Si and Shan Cai argue after he gets jealous when he sees her with a guy named Xiao Shun at her new job. After their fight, Si goes on vacation. But when he returns, he receives a phone call from Xiao Shun and finds out that he kidnapped Shan Cai. It turns out, Xiao Shun is seeking revenge for his best friend, whom Si bullied and beat up before. Dao Ming Si arrives to save Shan Cai and starts getting beaten up by Xiao Shun instead. Just as Xiao Shun is about to throw a chair to hit the bloodied and tied up Dao Ming Si, Shan Cai jumps in to shield him from it. They weren’t officially together yet at the time, but you know this just solidified their relationship even more.

1. Dao Ming Si gets sick and stuck in a stairwell with Shan Cai

Dao Ming Si finally gets to ask Shan Cai out on a date, but Shan Cai isn’t clear on what time they're supposed to meet up. And so Dao Ming Si waits for her for hours at the meet-up place and stays there even when it starts raining. (The commitment!) She finally arrives and they plan to get some tea, but instead, Dao Ming Si starts to get sick and the exit doors of the stairwell are all locked. They end up spending the night together in the stairwell, with Dao Ming Si sleeping on Shan Cai’s lap. It might not be the date either of them were hoping for, but there's no doubt that fans were squeeing while watching at home.

Top 10 Meteor Garden
Your Guide to Thriving in This Strange New World
Staying
In? What to watch, what to eat, and where to shop from home
OR
Heading
Out? What you need to know to stay safe when heading out