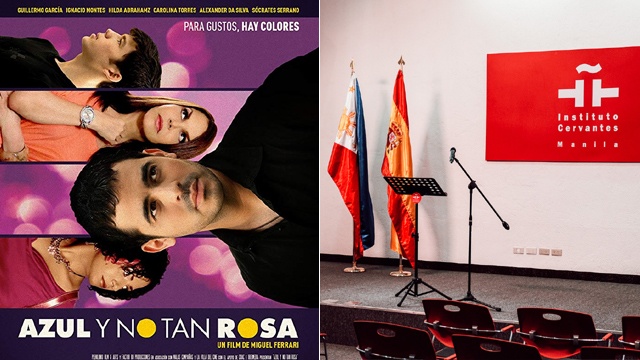 Make It a Date: Catch These Foreign-Film Screenings for Free This Month

(SPOT.ph) You might already have your usual movie nights all planned out, but that doesn't mean you can't try something new and different for your next date—like maybe watching a foreign film or two. The newest outpost of Instituto Cervantes in Intramuros will be screening a film on every Saturday of August as part of their Four Gems of Latin American Cinema series. You can take a break from your go-to movie theater and make an adventure out of going to Intramuros to catch the films. Plus, it'll be easy on the pockets too, since the screenings will be free. We list down the four critically acclaimed films you can watch this month.

Azul y no tan rosa (My Straight Son) (2012)
Directed by: Miguel Ferrrari
Screening schedule: August 4 at 6 p.m.
Diego, a fashion photographer from Venezuela, wants to take the his relationship with Fabrizio to the next level by moving in together. But things get complicated when he unexpectedly has to take care of his son Armando, who lives in Spain and whom he hasn't seen in years. As Diego tries to work on his relationship with his son, Fabrizio gets mauled by a group of homophobes, leaving him in a coma. The film won Best Feature Film at the LGBT Montreal Film Festival in 2013 as well as the Goya Award for Best Latin American Film in 2014.

El método (The Method) (2005)
Directed by: Marcelo Piñeyro
Screening schedule: August 11 at 6 p.m.
Based on a play by Jordi Galcerán, this film is about the darker side of the corporate world. Seven candidates are competitively vying for the same high-ranking position in a multinational company. It is then revealed that one of them isn't actually a candidate, but an employee from the Human Resources department analyzing their personalities. The candidates are then put to the test to see how far they'd go for the job that they want.

El secreto de sus ojos (The Secret in Their Eyes) (2009)
Directed by: Juan José Campanella
Screening schedule: August 18 at 6 p.m.
This award-winning film revolves around Benjamin Esposito (Ricardo Darín), who is set to retire from his work as a judicial employee. He sets out to write a novel about a past criminal case in which he served as a witness. His work on the book leads him to take a closer look at his own past—as well as a time in Argentina's history filled with violence and death. The film has won over 50 awards from around the world, including the Goya Award for Best Latin American Film and the Academy Award for Best Foreign Language Film in 2009.

Lista de espera (Waiting List) (2000)
Directed by: Juan Carlos Tabío
Screening schedule: August 25 at 6 p.m.
In this comedy, a group of strangers are all waiting for a bus at a station in Cuba, but they can't get a ride as all of the buses that pass by them are full. The administrator can't seem to find a solution and decides to close the terminal. Still, the passengers stay behind and repair an old, broken-down bus—making for a strange but heartwarming connection among the strangers.

Instituto Cervantes Intramuros Foreign Films Film Screenings Instituto Cervantes
Your Guide to Thriving in This Strange New World
Staying
In? What to watch, what to eat, and where to shop from home
OR
Heading
Out? What you need to know to stay safe when heading out