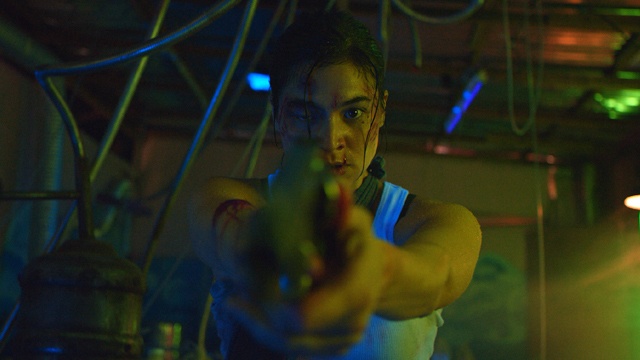 (SPOT.ph) BuyBust is not an action movie. Neither is it a police drama. It might be a statement film against the Philippine government drug war, but in reality, it’s also director Erik Matti’s take on a zombie apocalypse scenario. The award-winning auteur, who co-wrote the film with Anton Santamaria, seems less concerned about delivering a cohesive story but is able to show off his ability to direct sequences of pure and absolute mayhem.

Anne Curtis plays Nina Manigan, a drug-enforcement agent who in the beginning of the story is going through the paces of integrating with a new Philippine Drug Enforcement Agency unit. Curtis is brilliant in the role, convincing as a hardened operative who’s seen some terrible things. Through the course of the film, she keeps pace with her co-star, ONE Championship Light Heavyweight champion Brandon Vera, who plays superstitious strongman agent Rico Yatco.

Manigan, Yatco, and the rest of their unit are tasked to nab drug lord Biggie Chen in a sting operation with the help of stool pigeon Teban (Alex Calleja), a mid-level drug dealer. With the exception of Manigan’s training and initiation preamble, the entirety of the film occurs over the course of one night. Matti marks the film with red, bold timestamps that fill the screen at particular junctions to give audiences a sense of how much time has passed. It’s a wonderfully loud visual device that underscores the tension during the brief pauses between the action.

The team is taken to the claustrophobia-inducing back alleys of a shantytown called Gracia ni Maria—and it’s a jarring, eye-opening peek into the seedy underbelly of the city that most people try to look away from. BuyBust revels in the dirt, the grime, and the darkness of poor, infested Manila. It forces audiences to look at the ugliness of a people severed from any guiding sense of what’s right, however cartoonish and inane. The sting operation quickly and inevitably goes to hell after an extremely tense stakeout.

BuyBust is visually breathtaking. Neil Derrick Bion’s cinematography complements Matti’s fast-paced approach and some of the best parts of the film are the long, single-take tracking shots that follow either Manigan or Yatco as they fend off throngs of crazed, murderous squatters. BuyBust is a zombie movie masquerading as a police action film. Matti turns the crowd into a pipe-swinging, shiv-stabbing mob that goes after our heroes wave after wave like a video game. There’s no sensible motive beyond the fact that these people are terrorized by a drug syndicate into abandoning all reason and throwing their lives away trying to stamp out the Philippine Drug Enforcement Agency like they were vermin.

Buybust Buy Bust Erik Matti Movie Review Anne Curtis
Your Guide to Thriving in This Strange New World
Staying
In? What to watch, what to eat, and where to shop from home
OR
Heading
Out? What you need to know to stay safe when heading out