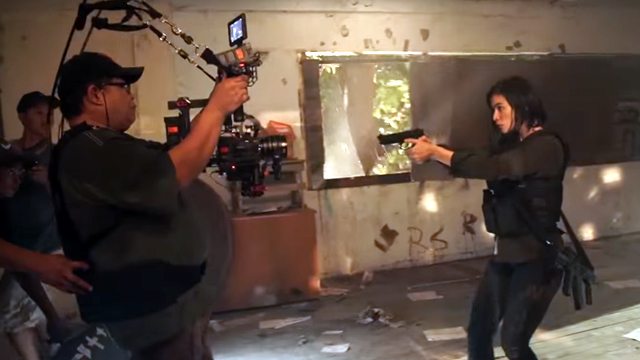 Anne Curtis did a lot of her own stunts!

(SPOT.ph) Director Erik Matti's BuyBust has been one of the most hotly anticipated movies of the year. It premiered in the U.S. on July 15 as part of the New York Asian Film Festival and earned plenty of praise from Variety. Now that it's finally out, it's filling local theaters with its visually stunning shots and intense, non-stop action. And to get movie buffs even more into the film, the people behind the movie have released a two-part video showing what went down behind all the action.

In the first 15-minute video, Matti talks about how he got the idea for the critically acclaimed movie. He reveals that they were in Caloocan when a drunk man started causing a scene. "Naisip ko, kung nagka-gulo dito, hindi ko alam kung paano lumabas. Hindi ko alam 'yong mga pasikot-sikot. So, that stuck with me." And so, he went to the Philippine Drug Enforcement Agency to ask if there really is a place like that. From there, the story developed.

Matti also gushes about Curtis' professionalism and how she maintains a light and easygoing attitude—she even sings and dances around—in spite of all her tiring and risky stunts. He shares that seeing the movie's lead actress in high spirits after filming such exhausting shots is one of the things that kept him and the crew going. He continues to explain how he chose the cast for their specific set of skills and knowledge about their roles. The 8,000-square-meter lot where the film was shot was also highlighted, as it became confusing labyrinth of makeshift houses.

The second video focuses on the preparation and training that the actors had to go through before they started filming. They trained in mixed-martial arts, Pinoy martial arts, and knife- and gun-handling. Their training with the Scout Rangers was also shown as they went through an obstacle course and shot a few scenes. You'll see how they shot an intense, three-minute parkour sequence that was choreographed down to the last move. The cast and crew end the video by talking about the importance of BuyBust as a "very Filipino action film" in Matti's words, starring a badass female lead that can take charge.

BuyBust follows a group of officers from the Philippine Drug Enforcement Agency (PDEA) as they attempt a drug-raid operation in one of the worst slums in Manila. But instead of them catching the drug lord, they're the ones who get trapped in the area, where vengeance-seeking residents fight back against the agents, including the newbie Nina Manigan (Anne Curtis).

BuyBust is now in theaters.

Buybust Erik Matti Anne Curtis
Your Guide to Thriving in This Strange New World
Staying
In? What to watch, what to eat, and where to shop from home
OR
Heading
Out? What you need to know to stay safe when heading out