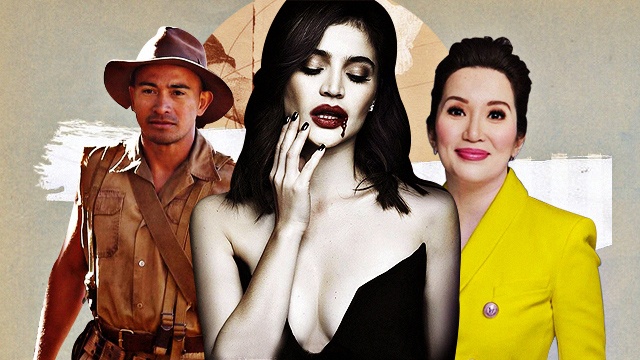 (SPOT.ph) There’s no doubt that the talent of Pinoy actors are the reason why a lot of local movies become such big hits. But some of the movies aren’t just box-office hits in the Philippines. Others are critically acclaimed in the international movie scene as well. And while there’s a lot more we can do when it comes to Filipino and Asian representation in the industry, these actors are proof that it can be done.

Bembol Roco in The Year of Living Dangerously (1982)

This Australian romantic drama is about a love affair during a political uprising in Indonesia in the '60s. Mel Gibson stars as Guy Hamilton, an Australian journalist who falls in love with Jill Bryant (Sigourney Weaver), an officer from the British Embassy. Bembol Roco plays Guy’s loyal assistant and driver Kumar, who is secretly part of the Indonesian government. Fun fact: Part of the film was also shot in the Philippines.

Lea Salonga isn’t just a household name in the Philippines. While we know her as a leading lady from romance films in the '90s, she’s known around the world as the singing voices of Mulan from the eponymous movie-musical and Jasmine from Aladdin.

The Great Raid is a war-slash-rescue-mission film based on the events of the Raid at Cabanatuan. The historic event saw American soldiers and Filipino guerillas work together to ensure the release of over 500 American prisoners of war from a Japanese camp in Nueva Ecija. Cesar Montano plays Captain Juan Pajota, who helped in coordinating the mission. The stars of the film include James Franco, Benjamin Bratt, Mark Consuelos, and Sam Worthington.

Billy Crawford in Dominion: Prequel to the Exorcist (2005)

It’s no secret that before he became the host of It’s Showtime!, Billy Crawford pursued an international career as a singer and an actor. During his stint abroad, he was part of a supernatural horror movie called Dominion: Prequel to the Exorcist, the fifth movie in The Exorcist franchise. You might not recognize him at first, as he plays a young boy named Cheche, who is believed to be cursed because of his physical deformities.

This American horror film is actually a remake of a 2004 Filipino movie entitled Sigaw. The film revolves around a former prisoner who moves into an apartment building. He tries to start a new life, but he can’t help but intervene when he hears his neighbor Walter (Kevin Durand) beating up his wife Gina (played by Iza Calzado). Soon, he realizes that the room next door has been empty for years and he’s actually being haunted by their ghosts. The original movie’s director, Yam Laranas, also directs the remake as Calzado reprises her role as the wife.

If you’re a '90s kid, you probably remember the “ILOVEYOU” a.k.a. Love Letter, a computer virus that attacked Windows computers in 2000. This American romantic drama is based on that event. In it, Jericho Rosales plays Victor, who risks being investigated as an international criminal just so he can reconnect with a woman named Butterfly (Briana Evigan). The film also stars other Pinoy actors including Gary Valenciano, Tirso Cruz III, and Joel Torre.

Though its title might suggest otherwise, Metro Manila is actually an indie British film directed by British director Sean Ellis. Still, it features a Pinoy cast and was filmed in the Philippines. The film is about a man (Jake Macapagal) who moves to Manila in hopes of finding a better life for his family. But instead, he meets Ong (John Arcilla) and gets caught in a life of crime that puts his loved ones in danger. The film was selected as Britain’s entry for Best Foreign Film at the 2014 Academy Awards, but it was not nominated.

Anne Curtis was asked to audition for a horror-slash-romance indie film in the United States by one of her friends. She sent an audition tape filmed in Manila and got the role in Blood Ransom two years later. She plays a damsel-in-distress-turned-vampire (!) who starts a love affair with the man who saved her (Alexander Dreymon) while they’re both on the run.

There are a lot of reasons why the movie adaptation of Crazy Rich Asians is one of the most highly anticipated movies of the year. It’s got an entertaining rom-com story and it's also the first Hollywood movie in 25 years to feature an all-Asian cast. But Pinoys will be seeing a familiar face when they catch it in cinemas as Kris Aquino will be playing a member of Malay royalty called Princess Intan in the movie. In a report by Pep, she reveals that she hired an entire production team just for her audition tape.

Mon Confiado has appeared in over 700 local shows and 300 Pinoy films in his career. Aside from Goyo: Ang Batang Heneral, one of his latest projects is an international independent film called White Knights. He plays a detective in the story, which is about an American soldier who gets caught up in a murder spree after moving to Manila.

While it was first announced that Jasmine Curtis-Smith would be starring in this romance-drama film, it looks like Rhian Ramos will be taking her place as a character named Samantha. Empty by Design, which stars Supernatural actor Osric Chau, follows the story of two people who return to the Philippines after a long time abroad. Directed by Andrea Walter, it also stars Chris Pang, who appears in Crazy Rich Asians, and Filipino-American actor Dante Basco who voiced Zuko from Avatar: The Last Airbender. The movie is currently being filmed in the Philippines.

White Knights Mon Confiado Subject: I Love You Dominion: Prequel To The Exorcist The Great Raid Empty By Design Crazy Rich Asians Metro Manila John Arcilla Blood Ransom Aladdin The Year Of Living Dangerously Mulan Rhian Ramos Bembol Roco Billy Crawford Jericho Rosales The Echo Anne Curtis Iza Calzado Kris Aquino Lea Salonga Cesar Montano
Your Guide to Thriving in This Strange New World
Staying
In? What to watch, what to eat, and where to shop from home
OR
Heading
Out? What you need to know to stay safe when heading out