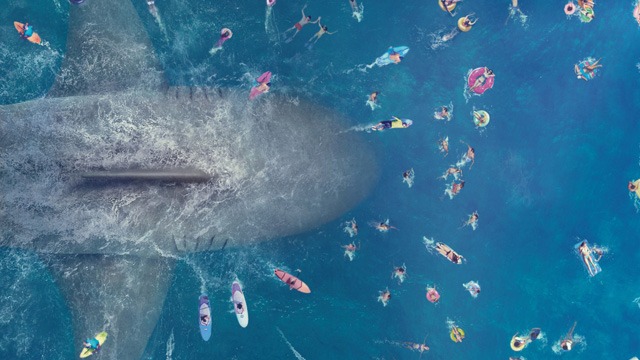 The Campy New Shark Thriller Everyone's Talking About: The Meg

It's an enjoyable creature feature through and through.

(SPOT.ph) Some of the most chilling and wonderfully done moments from June’s Jurassic World: Fallen Kingdom were all the mosasaurus scenes. They were, in fact, so promising, that it would probably have been enjoyable to have the entire film just be all about a prehistoric sea monster let loose on the world at large. Luckily for us, The Meg steps up to the plate with a prehistoric sea monster of its own: a megalodon, a ridiculously oversized shark believed to have gone extinct millions of years ago.

Except it didn’t. According to this film’s wonky science, there’s an even deeper, unexplored part of the ocean teeming with undiscovered life separated by a previously unpenetrated layer of subzero thermocline. The scientists are stationed in an offshore research facility funded by obnoxious billionaire Jack Morris (Rainn Wilson), who arrives just in time for the inaugural dive into unexplored territory. Ignore the fact that the very first time this zone is entered, the scientific team sends a manned submarine instead of a drone. Also ignore the underwhelming celebration with a discovery of an entirely new ecosystem that’s tantamount to finding life on Mars. Ignore even the occasionally terrible acting. This film doesn’t hedge its bets on realism or superior thespianism. It is pure, unadulterated shark-tastic ridiculousness. And boy, does it get fun.

Based loosely on the sci-fi horror novel by Steve Alten, The Meg features Jason Statham as Jonas Taylor, a deep-sea rescue operative who lost credibility when his first encounter with the Meg was dismissed by his colleagues. But because he’s a super action hero, he’s called back to do a rescue operation involving his ex-wife Lori (Jessica McNamee), who happens to be the only reason he would dive back into the water. Except nothing happens with that relationship at all and exists purely as a plot device to get Taylor on the job. Don’t worry, though, there’s still a whiff of shoehorned romance. Li Bingbing plays Suyin Zhang, a single-mother marine biologist who doesn’t approve of Taylor’s methods until she sees his rock-hard abs, after which their relationship segues into flirtation. Suyin also has a precocious eight-year-old daughter, Meiying (Shuya Sophia Cai), who wears the cutest outfits and has the snappiest lines.

All hell breaks loose when the Megalodon, charmingly nicknamed Meg, breaks through the thermocline and starts eating anything it can get its toothy jaws on—which is, well, everything. It’s a 100-foot shark, after all. To be fair, sharks actually only kill an average of six people a year but when you have rows upon rows of razor sharp teeth, soulless eyes, and are shaped like a torpedo, it’s hard not to appear like the villain. The film does does its bit of environmental responsibility when it injects a scene where Dr. Minway Zhang (Winston Chao), Suyin‘s dad and role model, laments how sharks are finned, “all for a bowl of soup.” Meg, on the other hand, does absolutely nothing to remedy sharks’ poor public image because it’s a real jerk.

The movie cranks up audiences’ thalassophobia or fear of the sea with plenty of tense and terrifying sequences, but is also loaded with tons of crazy, adrenaline-filled action courtesy of Statham’s impossibly heroic Taylor, who somehow managed to stay in absolute tip-top shape despite binging on booze during his temporary retirement. This is the sort of film where you check your brain at the door and just enjoy the ride. Hyperaggressive giant prehistoric shark? Check. Fearless action hero who’s cool under pressure? Check. Supporting characters and tons of extras to act as shark chum? Check, check, and check.

The Meg is a movie that benefits a lot from a big screen, which underscores the gargantuan size of its titular character. Director John Turteltaub does a good job of building up the tension, keeping the Meg offscreen for the entire first act, then smatters the second half with a few close encounters, until the Meg is finally unleashed upon one of the most populated beaches in China in the third act. By the time it gets to the finale, the suspense and horror gives way to comedic mayhem as the Meg goes through beachgoers like it were at an eat-all-you-can buffet.

The action is over-the-top, with both Taylor and the Meg outdoing each other in terms of unrealistic but tremendously entertaining feats. Although Taylor gets the lion’s share of heroic deeds, Suyin is a notably strong female lead who is equally fearless and charges headlong into the unknown. She gets several big moments, including a tense sequence in a polycarbonate shark cage. The Meg is a highly ridiculous movie with just the right amount of action, carnage, and wonky science that doesn’t try hard to be anything other than a whole lot of fun.

The Meg is now in theaters.