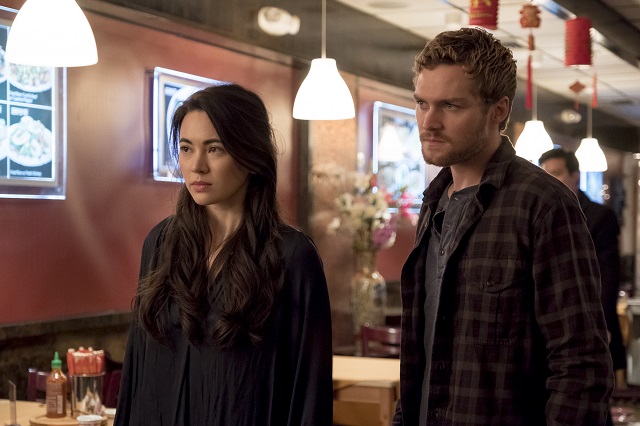 10 Reasons Why You Should Start Watching Marvel's Iron Fist

Before the second season premieres on September!

(SPOT.ph) Marvel's Iron Fist might be a superhero series, but it also reflects real-life problems like relationship issues, office politics, street wars, social injustice, and more, mixed in with a generous amount of mystical martial arts and ancient lore. (It’s like all the show genres that you marathon all rolled into one!)

The Netflix series revolves around Danny Rand's (Finn Jones) journey as he struggles to become a hero while remembering his true identity. Danny is the only survivor of a plane crash that killed his wealthy family while they were en route to China. Abandoned and with nowhere else to go, he was adopted by the people of K'un-L'un, where he trained to become the Immortal Iron Fist—the sole protector of the city against an order of evil ninjas called The Hand.

After 15 years, Danny leaves K'un-Lun and returns to New York seeking roots as the rightful heir of Rand Enterprises. Little does Danny know that he would constantly be clashing against The Hand and fulfilling his prophecy. And now, he balances the odd combination of working as a corporate by day and a crime fighter at night.

With the second season premiering on September 5, it's time to find out what’s in store for fans. And there's no better way to know than from the show's lead and showrunner themselves. We got to catch up with Iron Fist’s Finn Jones and producer Raven Metzner when they were in Manila for the 2018 AsiaPOP Comicon. In a roundtable interview with other members of the press, we asked them about the future of the series and why we should get hyped for the second season.

When discussing the upcoming season as a whole, Jones says, “There’s a lot of love for the character and the show. I can’t say how many fistbumps [from fans] I get on a daily basis! I harnessed all that love and allowed it to remotivate me to bringing back Danny. We’ve got a lot of new people working on the show that really wanted the best for it and was a great collaborative [effort].” If you’ve never seen the series before, we’ve narrowed down the reasons why you should start streaming ASAP just in time for the bigger and better Iron Fist season 2.

The next season involves twice as much action and widescale battles. Jones confirms, “There’s a lot of fighting scenes and they’ve all been elevated!”

Iron Fist brought renowned stunt coordinator Clayton Barber—whose recent work includes Black Panther—to personally work with Jones in order to nail specific choreography and styles. The actor enjoyed preparing for the stunts and took the training a step further by insisting to get punched so he could understand the sensation. He adds, “Because let’s be honest, when you’re performing stunts, it’s mostly miming stuff. But I really wanted to know what it felt like to clock someone and take a hit!”

To prepare for his role, Jones' training regimen focused more on toning up and staying agile instead of bulking up. He meditated daily, did yoga, worked with a personal trainer, and studied different combat styles.

When asked to discuss the process in detail, Jones says, “I’ve always given a 110% of my energy to [Danny Rand]. For four months before the show started, I trained for five days a week under different [martial arts] disciplines. I really wanted to give my energy and all of my mental and physical self.”

He even trained under an ex-Shaolin monk named Shifu Ming to learn about traditional Kung Fu, Tai Chi, and even Chinese medicine—the meridian system and Chi alignment. “He was an awesome dude. When I couldn’t [handle the training anymore, he would motivate me by saying, ‘More Chi, more power!’”

The show's girls are just as badass.

In this martial arts-themed series, you'll witness both the main hero and his girlfriend each engaging in intense battle choreography against criminals. Even in the first season, Colleen Wing (Jessica Henwick) has never been satisfied with just being identified as Danny’s love interest or a damsel that needs saving. Jones shares that you’ll definitely be seeing more of this badass gal this season, saying, “Colleen’s got fantastic arc this season and if you’re a fan then you’re not gonna be disappointed.”

Colleen Wing isn't just relegated to act as a sidekick to Danny, but goes on her own journey and arc of rediscovering herself and her past. There's also a teamup between Colleen and Misty Knight (Simone Missick) from the other Marvel-Netflix series, Luke Cage. Metzner adds, “You’ll get to see real friendship between [Colleen] and Misty Knight.”

The action also isn’t limited to just the fighters. The series features different kinds of strength with someone like Joy Meachum (Jessica Stroup) conquering the corporate world since the first season as the head of Rand Enterprises.

Just like New York City in real life, the series' fictional universe accurately shows the diversity and fashion of its different areas—from the crisp and chic designer style of the executives to the pragmatic fabric bundling of the protagonists. Jones and Metzner share that Danny is no longer a barefooted brawler and finally rocks some cool sneaks: low-top Converse shoes. Metzner explains, “It’s a very New Yorker sneaker. It feels very urban and modern.” Jones excitedly adds, “And it’s also good for doing martial arts!”

The main antagonist of this season is Davos (Sacha Dhawan), the childhood friend and rival of Danny Rand from K’un-Lun. Metzner explains the dynamic between Danny and Davos further: “It’s complicated by the fact that they love, care, and support one another but have fought and are jealous of each other. The more you add all that dimension, the more story you’ll get.”

The show also introduces Typhoid Mary (Alice Eve), a woman with multiple personalities. In the comics, she’s a mutant that wields telekinetic, hypnotic, and pyrokinetic abilities but the extent of her capabilities in the Netflix/Marvel universe remains to be seen. You'll just have to watch and find out how she will go against our heroes.

You get to witness a dramatic sibling rivalry.

When it comes to sibling squabbles, the most you could probably do are shouting matches, passive-aggressive actions, and calling your parents to act as referees. Danny and Davos are self-proclaimed brothers who take it up a notch. Since they grew up together in a very small and isolated community and trained together in a very intense environment, there are a lot of unresolved issues driving the conflict.

Davos blames Danny for abandoning K’un-Lun and feels he’s not a worthy successor to the Iron Fist. They both have the best intentions but execute their ideals in different ways, with Davos going to extreme measures to cleanse the world of “impurities” while Danny usually takes the pacifist route. Metzner explains, “The Marvel Cinematic Universe deals with big threats and The Hand was also a global organization but this season, we really wanted to make this show more personal. [This season is] about two brothers in conflict.”

Finn Jones Iron Fist Marvels Iron Fist Netflix Marvel Interview
Your Guide to Thriving in This Strange New World
Staying
In? What to watch, what to eat, and where to shop from home
OR
Heading
Out? What you need to know to stay safe when heading out