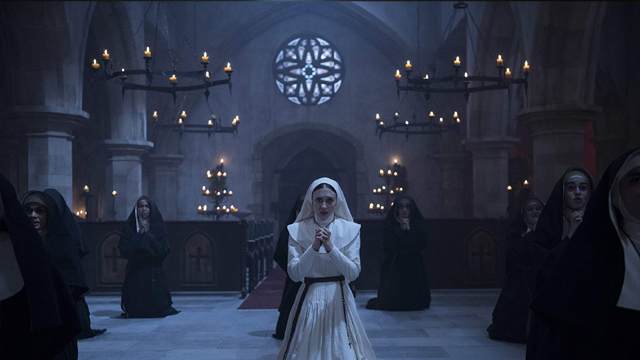 The Nun Makes for an Entertaining Addition to the Conjuring Series

It's essentially a Punk'd episode veiled as a horror movie.

(SPOT.ph) There’s the Marvel Cinematic Universe for superheroes, but there’s another shared movie universe that’s creeping up as a solid contender for spawning successful franchises. The Nun is a spin-off of James Wan’s Conjuring universe, which also gave rise to the evil doll Annabelle, and features the demon nun Valak. Set in Romania in 1952, The Nun is a prequel (to a prequel) story for the sinister nun who made a cameo in Annabelle: Creation. It’s a gothic horror film that makes use of creepy, old-world imagery and a smattering of Catholic iconography to deliver a by-the-numbers roller-coaster ride of thrills.

The story features a bare bones cast of three. Father Burke (Demián Bichir) is an exorcist priest sent to investigate the suicide of a nun at a super creepy Romanian castle-turned-convent with the help of novitiate Sister Irene (Taissa Farmiga). She's had visions that the Vatican thinks to be pertinent to the case. They’re assisted by Frenchie (Jonas Bloquet), the man who discovered the body of the nun.

With so few potential victims, The Nun relies on a lot of scary moments centered on the three main characters. If there’s anything wrong at all with the film, it’s that it never gives a real sense of danger because the demon nun Valak (Bonnie Aarons) doesn’t seem like it wants to kill anybody—it just creeps them out a lot. Valak is basically the Ashton Kutcher of the demon world, and the convent is the set of an evil version of Punk’d.

The three characters are also some of the bravest—but also most foolish—people you’ll ever see in a movie. Most sane folks would run the other direction when seeing a nun appear and disappear in the woods at night, but not these guys, and that’s what makes it so much fun. If Father Burke and Sister Irene decided upon arriving that "No, this Romanian castle is evil and haunted so let’s get the heck out of here," then the film would be over in 10 minutes. Thankfully, even blood that stays fresh on the steps of the convent after several weeks doesn’t creep these people out at all, so audiences get to join them on their creeptastic adventure.

Farmiga, whose sister Vera stars in the Conjuring films, plays the unflappable Sister Irene. She bravely goes into ever-darkening hallways lined with crosses in different styles and sizes (mental note: Hallways lined with crosses are probably not somewhere you should pass) without hesitation. A novitiate who experienced supernatural visions as a child that always ended with the phrase, “Mary points the way,” Sister Irene’s special role hints that the titular nun may also refer to her, rather than the ersatz nun. Her visions tangentially help the trio in search of a relic that—if it actually existed—would be so incredibly important to the Catholic Church that it makes absolutely no sense to be left in the care of a handful of nuns in a castle with ridiculously evil origins.

But sense doesn’t figure much into The Nun—specially common sense, which none of the characters have. When searching the underbelly of a demonic convent, a party of three should stick together. That makes perfect sense. But instead, everyone goes off in different directions like buffoons, which is absolutely perfect. Audiences could not ask for a more foolhardy bunch of heroes to see demonically duped. Valak seems like an extremely fun demon nun who would be a total hit at Halloween parties because it unleashes a variety of supernatural scares that don’t seem particularly harmful.

The trouble with prequels is that the stakes are so low because you already know that Valak is going to be pestering the heroes of The Conjuring. Without high stakes, true horror is blunted, which makes The Nun the least terrifying among all the Conjuring films but also the most fun. This is particularly evident with the character of Frenchie, who provides comic relief at the most critical moments, preventing The Nun from taking itself too seriously. Frenchie even attempts to hit on Sister Irene, which is all at once funny, awkward, and inappropriate.

Horror fans will be disappointed to learn that there’s nothing here that will give them nightmares. There isn’t anything particularly disturbing or deeply sinister, and the medieval setting makes it so far removed from the audiences’ reality that there is no lingering sense of dread once out of the cinema. Director Corin Hardy plays everything by the book, and all the fake outs, premonitions, and camera angles will not surprise anybody used to seeing horror films. That said, viewers should enjoy the beautiful gothic imagery, particularly one scene where Father Burke follows a young boy through white sheets. The use of Victorian-era safety coffins, or coffins fitted with bells to prevent incidents of people being buried alive (that actually used to be a thing) is wonderful and appropriately creepy.

The Nun is firmly tied to The Conjuring, bookended by Lorraine Warren’s (Vera Farmiga) narration, and is a great addition to the growing mythology of the horror universe. Valak, traditionally depicted as a winged cherub atop a dragon but thankfully portrayed as a Marilyn Manson-faced nun, is unforgettably creepy and has the potential to be as memorable as other horror-movie characters. The Nun has just enough hair-raising moments to keep things interesting and just the right amount of levity to make it a solidly entertaining experience.

The Nun is now showing in theaters.

Bonnie Aarons Jonas Bloquet Taissa Farmiga Demián Bichir The Nun Movie Review The Conjuring Horror Movies
Your Guide to Thriving in This Strange New World
Staying
In? What to watch, what to eat, and where to shop from home
OR
Heading
Out? What you need to know to stay safe when heading out