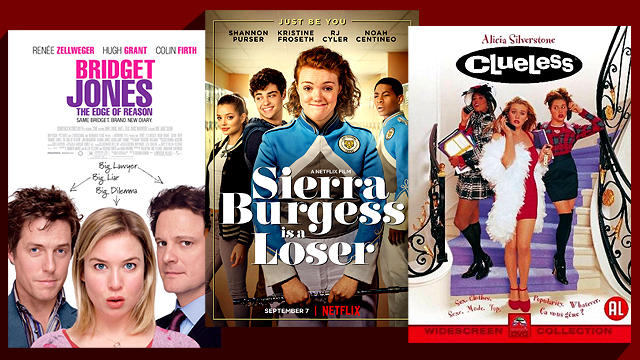 (SPOT.ph) Books turned into movies are nothing new. Just this year alone, we’ve already seen a number of book-to-film adaptations such as Ready Player One, A Wrinkle in Time, Love, Simon, and most recently, romance-themed flicks like Crazy Rich Asians and To All the Boys I’ve Loved Before. But there’s another subcategory of adaptations you might be sleeping on: Movies that are inspired by classic literature. Here's a roundup of the ones you should be watching now.

The Netflix Original that stars current Internet boyfriend Noah Centineo and Stranger Things alum Shannon Purser flips the switch on Cyrano de Bergerac. The original play was written in 1897 by Edmond Rostand and was based on the life of a real-life nobleman with the same name and a large nose. In this retelling, Purser plays the title role of Sierra Burgess who somehow ends up texting with Centineo’s Jamey in a case of mistaken identity. Though the original play ends with Cyrano on his deathbed, both end on a happy note.

Easy A (The Scarlet Letter)

Olive Penderghast (Emma Stone) was a nobody at her high school. That is until she lies to her best friend Rhiannon (Aly Michalka) about losing her virginity to an imaginary college guy and gets branded as the school slut. She decides to use the rumor mill to her advantage and starts fake sleeping around in exchange for gift cards. In the movie, they actually study The Scarlet Letter in class, which inspires Olive to brandish a scarlet A on her breast just like Hester Prynne. In Nathaniel Hawthorne’s story, Hester is publicly shamed and made to wear an A (for adulterer) for having an affair with a man she refused to name. In the movie, things get crazy when Olive’s lies finally catch up with her. She reveals the truth through a webcast she broadcasts to the entire school.

Cher Horowitz (Alicia Silverstone) is modern-day Emma Woodhouse, a spoiled girl who lives in Beverly Hills. The movie written and directed by Amy Heckerling takes Jane Austen’s novel Emma and turns it into a coming-of-age film inspired by the teens of Beverly Hills in the '90s. Just like Emma, Cher also loves to meddle in other people’s love lives until she finds herself falling for someone, too. It’s got all the ingredients for the perfect teen rom-com: makeovers, crushes, and high school drama. And let’s not forget to mention the total Baldwin, Paul Rudd, who plays Cher’s step bro Josh. Ten out of 10 would recommend a re-watch.

10 Things I Hate About You (The Taming of the Shrew)

The Taming of the Shrew, a comedy by William Shakespeare, tells the story of a young man Lucentio who falls in love with the young woman Bianca in the city of Padua in Italy. The problem is, her father will not allow her to date until her older, ill-tempered sister Katherine does, as well. P.S. Unfortunately for Lucentio, Bianca already has two suitors to begin with. One of her suitors Hortensio convinces his friend Petruchio of Verona to marry Katherine. In 10 Things I Hate About You, Lucentio is the adorably geeky Cameron James (Joseph Gordon-Levitt), who falls in love at first sight with Bianca Stratford (Larisa Oleynik). He volunteers to tutor him in the guise of getting closer to her. Bianca’s suitor Hortensio is Joey Donner (Andrew Keegan). Of course, she isn’t allowed to date unless her older sister Kat (Julia Stiles) does, too. Joey arranges for his friend Petruchio aka Patrick Verona (Heath Ledger) to take out Kat so he can date Bianca. But, well, nothing is ever that simple in a teen flick, right?

This hilarious film loosely based on a William Shakespeare play is about Viola Hastings (Amanda Bynes), a high school soccer player who covers for her twin brother Sebastian (James Kirk), so that she can play soccer and he can go off with his band. Viola is awkward and unconvincing at first until the prettiest girl in class, Olivia (Laura Ramsey) develops a crush on fake Sebastian. Viola finds herself falling for her roommate and team captain Duke Orsino (Channing Tatum), who has feelings for Olivia. “Sebastian” promises to help Duke get with Olivia if he trains “him” at soccer. After a run-in at a carnival, Duke ends up kissing Viola and falls for her, too—eventually confessing his dilemma between the two girls to “Sebastian” who is—duh—actually Viola. When the real Sebastian returns, things get complicated because Olivia declares her feelings for him and kisses him. Duke feels betrayed and well, you’ll have to watch the movie to find out how it all ends.

The novel Les Liaisons dangeureuses by Pierre Ambroise Laclos is a story about two very bored aristocrats who stir up a bit of drama to make their lives more interesting. In the film, step-siblings Kathryn Merteuil (Sarah Michelle Gellar) and Sebastian (Ryan Philippe) make a wager: Sebastian will add the prep school headmaster’s daughter (and virgin saving herself for marriage as chronicled in an essay published in a magazine) Annette Hargrove (Reese Witherspoon) to his list of conquests. If he fails, he has to hand over his vintage Jaguar to Kathryn. If he succeeds, he’ll finally get to sleep with Kathryn—something he’s apparently been obsessing since they became stepbrother and sister (ugh, we know). Lots of deceit, manipulation, and tension make this romantic drama quite an interesting take on teen sexuality for its time.

She’s All That (Pygmalion)

In classic teen rom-com tradition, She’s All That pretty much blazes the trail for fake relationship tropes. Who can forget Laney Boggs’s (Rachael Leigh Cook) emphatic “Am I a bet? Am I a stupid bet?” upon discovering that hot guy on campus Zack Siler (Freddie Prinze Jr.) actually started pursuing her because of, well, a bet? The film borrows from George Bernard Shaw’s Pygmalion, in which two men—one scientist of phonetics and one linguist—place a bet on whether the other can transform Eliza Doolittle, a cockney-speaking Covent Garden girl, into an elegant, well-spoken lady who can pass as a duchess. There is of course that classic “makeover” reveal that makes Zack’s jaw drop at the sight of specs-less and out-of-her-paint-covered-overalls Laney. But if we’re truly being honest, she looks exactly the same—she was already gorgeous from the start.

Unlike William Shakespeare’s Othello, which takes place on the streets of Venice, O begins on the basketball court. Odin James (Mekhi Phifer) scores the winning shot and is awarded MVP by his coach Duke Goulding (Martin Sheen). The coach’s son and Odin’s best bud Hugo (Josh Hartnett) harbors feelings of envy and makes it his mission to destroy Odin’s rep. Hugo tries to mess with Odin by convincing him that his girl Desi (Julia Stiles) is cheating on him. (She actually isn’t, by the way.) It’s a controversial tale of drugs, deception, and betrayal that ends in murder and suicide, which is quite similar to the dark themes of the original play.

Get Over It (A Midsummer Night’s Dream)

High school basketball hotshot Berke Landers (Ben Foster) gets dumped by his perfect girlfriend Allison McAllister (Melissa Sagemiller) for a boyband wannabe Striker Scrumfeld (Shane West). So, he enlists the help of his best friend Felix Wood’s (Colin Hanks) sister Kelly (Kirsten Dunst) to get her back. Interestingly enough, they stage William Shakespeare’s Midsummer Night’s Dream, which this film takes a bit of inspiration from. In a strange case of life imitating art, Berke finds himself finally getting over Allison and falling in love with Kelly.

Bridget Jones (Renee Zellweger) is modern-day Elizabeth Bennet who is torn between her dashing boss Daniel Cleaver (Hugh Grant)—George Wickham in the Jane Austen novel—and Mark Darcy (Colin Firth—who actually portrayed Mr. Darcy in the BBC drama Pride and Prejudice), the obnoxious lawyer whose parents are friends with hers. There is a bit of accidental mooning on live television; the discovery of enormous knickers; drunken karaoke and crying; momentary fisticuffs; and finally, a declaration of love.

Bridget Jones’s Diary Get Over It O She’s All That She’s The Man Sierra Burgess Is A Loser Easy A 10 Things I Hate About You Adaptations Movies Books Movie Adaptations Clueless Literature Cruel Intentions
Your Guide to Thriving in This Strange New World
Staying
In? What to watch, what to eat, and where to shop from home
OR
Heading
Out? What you need to know to stay safe when heading out