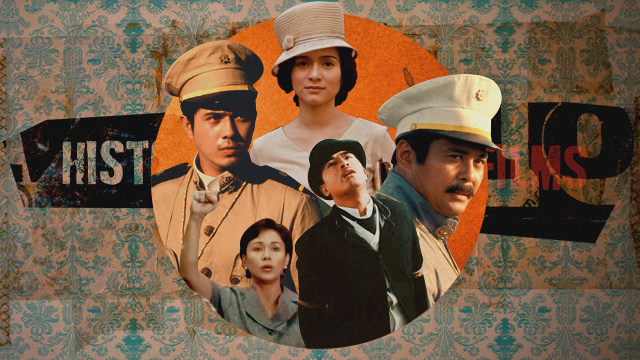 (SPOT.ph) The Philippines has such a rich, deep history that it's no surprise that filmmakers are constantly inspired by it. Over the years, there have been many films based on history or on historical figures that not only captivated audiences with their powerful and enriching stories, but have also taken viewers back in time with the detailed costumes, sets, and atmosphere. Be it based on real people, or just set during a certain time period, these local historical films are a must-watch.

We list down 10 must-watch Pinoy movies that are based on Philippine history:

Directed by: Peque Gallaga
Peque Gallaga's Oro, Plata, Mata is a straight-up classic—and, even if it was made in the '80s, it still deserves to be seen, studied, and enjoyed. Set during World War II, with several historical moments happening in the background, this film focuses on two rich families whose paths intertwine as the Japanese occupation begins. From extremely wealthy beginnings to a string of bad luck, this film makes perfect use of its setting to tell a fascinating story, on top of having a stellar cast in Cherie Gil, Joel Torre, and more.

Directed by: Marilou Diaz-Abaya
For anyone who grew up in the late 1990s, Marilou Diaz-Abaya's take on the life and death of our national hero José Rizal practically became required viewing for school. When it was released, not only was it unlike any previous historical film (or Rizal film) than ever before with its massive scale and exquisite detail (not to mention a star-studded cast in Gloria Diaz, Gina Alajar, Chin Chin Gutierrez, and Cesar Montano as the titular figure), it was also the most expensive Filipino film produced when it premiered. This epic retelling of Rizal's well-known story managed to breathe new life into historical figures we've already learned about in school.

Directed by: Mike de Leon
In a clever take on the historical film, and a response to almost crafting what would become Marilou Diaz Abaya's José Rizal, Mike de Leon co-wrote and directed this mockumentary in which two filmmakers (Ricky Davao and Cris Villanueva) question the national hero Jose Rizal's life and the issues he faced with the Catholic Church by interviewing figures important to Rizal's life—including his mother, his siblings, his lovers, and more—before interviewing Rizal himself. This is a unique and fascinating take on Rizal's life and our beliefs in Rizal as a hero.

Directed by: Chito S. Roño
Starring Vilma Santos and Christopher de Leon, this film is about a family living through Martial Law in the 1970s. With historical moments set as the backdrops for their story—from the Vietnam War, to Ferdinand Marcos' re-election, to the former dictator's declaration of Martial Law—Dekada '70 is a brutal, no-nonsense retelling of what life was like in 1970s Manila. The film and its portrayal of activism comes are still very relevant today.

Directed by: Joel Lamangan
Set during the Japanese Occupation in the 1940s, this historical romance follows the stories of people affected by events related to World War 2. Among the characters are a newly married couple (Judy Ann Santos and Raymart Santiago) separated by duty and a transgender (Dennis Trillo) having an affair with a Japanese soldier. These unusual love stories are just the base for themes about love for country versus love for others, as well as the right to love who you want.

Directed by: Albert Martinez
Many of the local historical films focus on men, so it's always refreshing to see a woman take the lead. Based on the true story about Rosario Perriera (who just so happens to be businessman Manuel V. Pangilinan's grandmother), this tale is like a Filipino version of Anna Karenina, with its themes of high society, intrigue, adultery, and desire. Jennylyn Mercado plays the titular character, a Filipina flapper making her way back to Manila from New York City in the 1920s. The colorful and enchanting time period mixed with the daring and tragic tale make for a fascinating female-led historical film.

Directed by: Mark Meily
There are already several films about José Rizal that attempt to humanize the hero, but in El Presidente, the focus shifts to the first president of the Philippine Republic, Emilio Aguinaldo. A stunningly crafted film with gorgeous cinematogaphy and heart-thumping fights, El Presidente took the historical film and made it more of a blockbuster entertainment picture. While that may not seem like the way to go for some, the attention to detail that goes into recreating the late 1800s to the early 1900s is well worth the watch.

Directed by: Jerrold Tarog
The movie that really brought historical period films back on the map, Jerrold Tarog's Heneral Luna is a stylish, beautifully shot, and engrossing historical epic about the leadership of General Antonio Luna (played by John Arcilla) during the Philippine-American War. Large in scale, featuring huge war battles and a sprawling cast, Heneral Luna showcased Philippine history in a modern and thrilling way. Arcilla's Heneral Luna, with his foul mouth and badass demeanor, also really made this an instant classic.

Directed by: Lav Diaz
Lav Diaz' long and winding eight-hour epic may not be for everybody as it comes with a narrative that can be confusing. But Diaz takes the historical film and blends it with a little bit of fantasy, crossing timelines from the ones depicted in José Rizal's books to a critique of the 1896 Philippine Revolution. It also stars two of the biggest actors in the industry, namely Piolo Pascual and John Lloyd Cruz. It was a nominee for the prestigious Golden Bear Award at the 2016 Berlin International Film Festival.

Diected by: Jerrold Tarog
You rarely get a sequel or a spin-off from historical films, but Jerrold Tarog was able to do it with Goyo: Ang Batang Heneral. From Heneral Luna, Tarog's cinematic universe turns its attention to Paulo Avelino's young general Gregorio del Pilar, who is tasked to clean up Luna's loyal followers. The young general sets out to prove himself as deserving of his rank during the Philippine-American War. Retaining the same style and drive that made Heneral Luna a success, but taking a more subdued approach at times, Goyo is another must-watch for Pinoy moviegoers. It's exciting to see where this momentum is going, as there are plans of a third installment—a movie about Manuel Quezon.