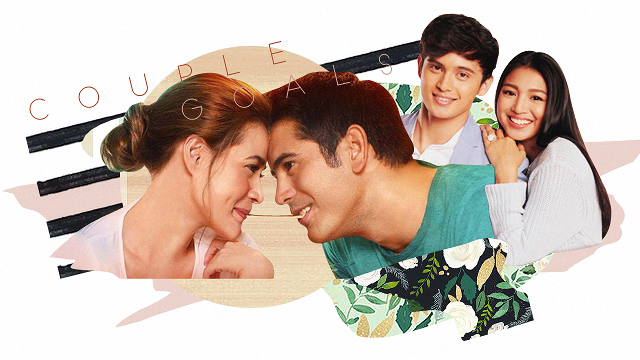 That we still ship!

(SPOT.ph) There’s no denying that Pinoys are in love with love—you can see it in the love teams and pairings that dominate movies and teleseryes. And they never seem to run out of problems, either. There’s the couple divided by their social status, the couple facing a terminal illness together, and even the couple who may or may not be siblings. With the complicated storylines of Pinoy shows and movies, there are bound to be pairings that you can’t help but root for just because they’re undoubtedly meant to be. We list down 10 of them.

Played by: Kristine Hermosa and Jericho Rosales
Pangako Sa ’Yo must have done something right when a reboot of the same name was launched 12 years after it aired. And they did, because Yna (Hermosa) and Angelo’s (Rosales) they-might-actually-be-siblings storyline makes for the ultimate plot twist. Put that together with the chaotic rivalry of Amor Powers (Eula Valdez) and Claudia Buenavista (Jean Garcia), and you’ve got a couple that’s ready for anything life throws at them.

Played by: Bea Alonzo and John Lloyd Cruz
Before fans knew them as Popoy and Basha from One More Chance, Alonzo and Cruz had a crazy love story as Jackie and Eli in Maging Sino Ka Man, which also featured Anne Curtis and Sam Milby. In the show, rich Jackie and poor Eli try to prove their love not just to each other but to their controlling families. In the end, they prove that their relationship can conquer anything.

Played by: Jodi Sta. Maria and Richard Yap
There may be a lot of rags-to-riches tales out there, but this story is one for the books. In Be Careful With My Heart, Maya (Sta. Maria) starts out as the temporary nanny of Sir Chief’s (Yap) daughter. There’s nothing sweeter than seeing her fall in love with Sir Chief’s children and treating them as her own, before eventually falling for Sir Chief himself. Not only were they able to show a different kind of family, but they had to go against everyone’s judgments, too.

Played by: Liza Soberano and Enrique Gil
This cute love story starts off with obnoxious rich boy Xander (Gil) crashing into the strawberry truck of the simple and hardworking Agnes (Soberano). It’s always great to see a couple learn from each other—like how Xander learns how to be more humble and put other people before himself. And even if their families find themselves into a feud, they’re strong enough to get through it.

Played by: Nadine Lustre and James Reid
#Adulting might be hard, but it’s even harder when you’re trying to take care of your family that you left back home. In this teleserye, Leah (Lustre) has to get fake-married to Clark (Reid) just so she can get a green card and work in the United States. They eventually get together for real, but not without problems. (Who can forget when Leah chose her career over her relationship? You go, girl!) Come the finale, they figure it all out together, capping it all off with a grand wedding.

Played by: Kristine Hermosa and Aga Muhlach
Summer flings usually come with a deadline, but Sam (Muhlach) is facing a deadline of his own—he’s actually terminally ill. And despite trying not to, he falls in love with Louie (Hermosa), whom he meets on a cruise. Though Sam’s carefree attitude goes against Louie’s need to have everything in order, they both learn from each other and make the most out of the time they have together.

Played by: John Lloyd Cruz and Luis Manzano
Noel (Cruz) and Mark’s (Manzano) comfortable life as a gay couple in New York is disturbed when Mark’s mom Shirley (played by Manzano’s real-life mom Vilma Santos) decides to move in with them. The conservative and callous Shirley proves to be a problem for Noel and Mark, but they face her wrath together, much like how they face Mark’s sickness together.

Athena and Kenji from She’s Dating the Gangster (2014)

Played by: Kathryn Bernardo (as Kelay and as younger Athena)/Dawn Zulueta (as older Athena) and Daniel Padilla (as Kenneth and as younger Kenji)/Richard Gomez (as older Kenji)
Kelay (Bernardo) and Kenneth (Padilla) are undoubtedly the stars of this film, but their love story is intertwined with that of Kelay’s aunt Athena (Zulueta) and Kenneth’s dad Kenji (Gomez). Athena and Kenji were high school sweethearts, but Athena broke up with Kenji so he could be with his dying ex-girlfriend (also named Athena). You’ll find yourself tearing up when Athena (Kelay’s aunt) and Kenji finally reunite years later, still in love with each other.

Mia and Ethan from Walang Forever (2015)

Played by: Jennylyn Mercado and Jericho Rosales
Mia (Mercado) and Ethan (Rosales) are a power couple, with Mia as a rom-com writer and Ethan as a startup founder. Mia’s screenplays about their relationship always turn out to be blockbuster hits. But when they break up, Mia’s career also takes a nosedive—that is, until Ethan comes back into her life. Only this time, their problem isn’t about who’s adjusting for whom. It’s how they can make up for lost time, because Ethan doesn’t have much left.

Played by: Bea Alonzo and Gerald Anderson
Anj (Alonzo) has always chosen career over love. Things get complicated when she meets Niño (Anderson), who is the opposite—he chooses love over career. Their relationship, given their different priorities, isn’t without fault. Jealousy, conflicts of interest, and everything else make them a relatable pair. Eventually, they learn and improve themselves as individuals, making them even better when they’re together.

How To Be Yours All My Life Otwol Pangako Sa'yo She's Dating The Gangster Pinoy Movies Walang Forever On The Wings Of Love Pinoy Shows Be Careful With My Heart Forevermore Love Teams Maging Sino Ka Man
Your Guide to Thriving in This Strange New World
Staying
In? What to watch, what to eat, and where to shop from home
OR
Heading
Out? What you need to know to stay safe when heading out