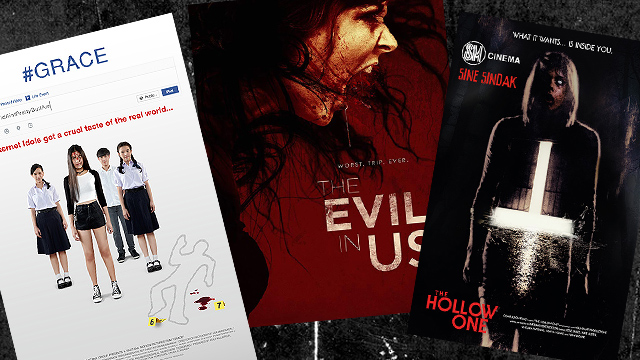 Get ready to scream!

(SPOT.ph) While everyone’s already looking forward to Christmas (cue Jose Mari Chan songs and Christmas trees in every mall), we can’t just skip Halloween. And if you’ve pretty much thrown in the towel on trick-or-treating and you're looking for something different to do, you might want to check out the first-ever Sine-Sindak Horror Film Festival, which runs from October 24 to 30 at SM Cinemas nationwide. The festival, presented by SM Cinema with CrystalSky Multimedia, features eight international horror flicks that’ll keep you up for weeks. Tickets go for P99 per movie or P199 for an all-day pass.

Check out the films included in the lineup below:

In The Hoarder, Ella (Mischa Barton) and her friend Molly (Emily Atack) come face to face with something sinister in her boyfriend’s secret storage unit.

When two scientists (Jed Brophy and Jeffrey Thomas) and a psychic (Laura Petersen) come together in an old farmhouse, they have to deal with a powerful spirit guarding the space.

This award-winning film from South Korea follows the story of a mutant who must deal with sudden and terrifying exorcisms in his hometown.

In The Evil in Us, Brie Armstrong (Debs Howard) has to survive a psychotic rage-inducing virus that has already taken her friends.

Years after a tragic massacre takes her family, Madison (Tara Holt) returns to figure out the past. But she finds something sinister waiting instead.

A couple of years after the death of their mother, Rachel Wade (Kate Alden) and her sister return to their small coastal town and find their father missing and the whole community gone. Their search for answers quickly becomes a quest for survival that involves their family’s dark past.

The story of The Lost Case follows two new hires in a media company in the middle of producing a popular show, Ghost Doctor TV. After being assigned to a suicide case, their investigation suddenly takes a terrifying turn.

In psychological thriller Grace, the titular character and her brother make plans to kidnap a popular Internet star, Care. Once a former Internet star herself, Grace intends to show Care that the world is not the bed of roses she thinks it is.