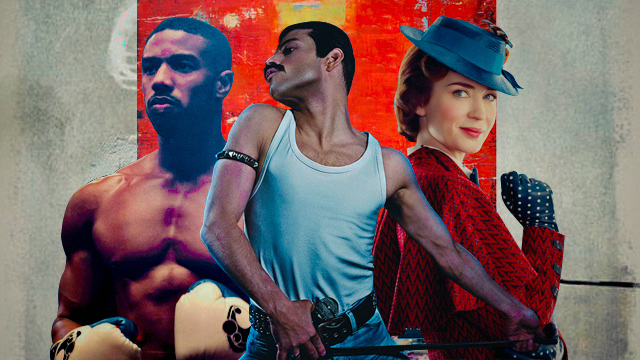 Some of the can't-miss films for the last quarter of the year.

(SPOT.ph) 2018 has turned out to be a terrific year for movies. Whether it’s a universe-shaking superhero blockbuster or an adrenaline-pumping impossible mission; from Grammy-winning Cinderellas to crazy rich love affairs to giant sharks, gorillas, and dinosaurs, this year had it all. But the year isn’t over, and as great a year as it’s been for the big screen, we still have a lot to look forward to. Here’s a list of 10 more films to get excited for.

Directed by: Bryan Singer
Premiere date: October 31
One of the most talented and fascinating figures in the history of modern music, the late, great Freddie Mercury, is played by Mr. Robot’s Rami Malek in what’s shaping up to be an Oscar contender of a film. Loaded with the most memorable Queen songs, this biopic on the truly mercurial Mercury looks to deliver some hair-raisingly good and memorable moments.

Round out your year with a horror film based on Dario Argento’s 1977 cult classic, Suspiria. The new Italian-American production features Dakota Johnson (Fifty Shades of Grey) as an aspiring dancer admitted to a creepy dance academy that’s more than meets the eye. The remake promises to be an unnerving, chilling experience bolstered by the performance of the ever ephemeral Tilda Swinton in a remarkable dual role and atmospheric music by Radiohead’s Thom Yorke. It remains to be seen if it can live up to the mad genius of Argento, whose bizarre and visceral tale of art, gruesome murder, witchcraft set a new standard for horror. Not for the faint of heart.

Directed by: Rich Moore and Phil Johnston
Premiere date: November 21
In a year of sequels, along comes Wreck-It Ralph and Vanellope in this follow-up to the 2012 hit cartoon about an arcade character gone rogue. This time around, the unlikely pair gets connected to the Internet and all sorts of hijinks ensue, meeting all sorts of new characters (and old ones like Disney Princesses out of their princess finery) as they find a way to save the game world of Sugar Rush.

Directed by: Steven Caple Jr.
Premiere date: November 21
Rounding out the slate of sequels for the year is Creed II, a follow-up to 2015’s Creed but a spiritual successor to the Rocky franchise. As far as sequels go, Creed is as deeply emotional and connected as they come as Adonis Creed (Michael B. Jordan) looks to face Viktor Drago, the son of Ivan Drago, the man who killed his father in the ring. Also starring Sylvester Stallone and Dolph Lundgren in their iconic roles, Creed II passes on the mantle to the new generation in a way that celebrates the past and bridges it to the present.

Bad Times at the El Royale

Directed by: Drew Goddard
Premiere date: November 21
This stylish and stylized neo-noir action thriller features an ensemble cast including Jeff Bridges, Chris Hemsworth, Jon Hamm, and Dakota Johnson in this tale set in 1969 at a quirky hotel that straddles the California and Nevada border. Featuring secret agents, criminals on the lam, sexy cult leaders, and a stash of missing cash, Bad Times at the El Royale actually looks to be a riotous, violent good time.

Directed by: Christian Rivers
Premiere date: December 5
Peter Jackson, the man behind the Lord of the Rings and The Hobbit trilogies, brings us another adaptation in Mortal Engines. Based on Philip Reeve’s quartet of books about a post-apocalyptic future featuring steampunk traction cities, or gargantuan machines that move and consume the earth’s resources. The visual spectacle demanded by the books seem right up Jackson’s alley, and it’s exciting to have a new heroine in the badly scarred Hester Shaw (Hera Hilmar).

Directed by: Rob Marshall
Premiere date: December 19
Emily Blunt stars as the titular magical flying nanny in this sequel to original which featured Julie Andrews. Set 25 years after the events of the first film, the umbrella-toting Poppins returns to the Banks family after a tragedy and helps them find joy again. The film introduces the classic book character to a whole new generation of children and adults alike.

Spider-Man: Into the Spider-Verse

Directed by: Peter Ramsey, Robert Persichetti Jr., and Rodney Rothman
Premiere date: December 13
Spider-Man fans should be over the moon with this extremely artistic animated feature of fan favorite Miles Morales, one version of many Spider-Men across the multiverse. Rendered in a kinetic, colorful, comics-inspired style, this Sony Animation feature promises to be a visual treat unlike any other. Comic fans will be delighted to see cameos from the numerous iterations of the friendly neighborhood web-slinger.

Directed by: James Wan
Premiere date: December 13
DC’s Aquaman has transformed from longest running joke to one of the coolest and most badass superheroes thanks to Warner Bros casting Jason Momoa in the role. First appearing in the much-maligned Justice League, the king of Atlantis gets his own solo film helmed by the The Conjuring’s James Wan. The sneak peek promises a swashbuckling tale with epic undersea battles, blossoming romance, and a tan, ripped, shirtless Momoa.