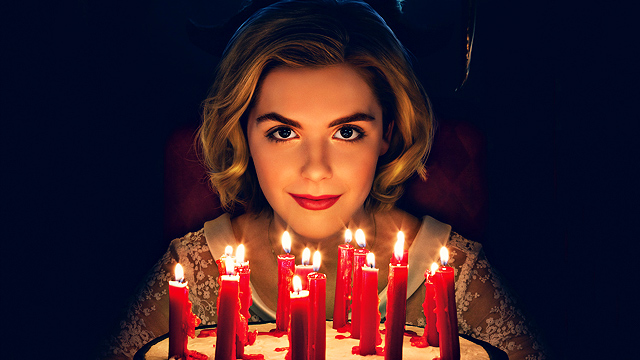 The Cast of Chilling Adventures of Sabrina on a Riverdale Crossover, Being a Witch, and Their Dream Sweet 16

Plus, here's what went down at Sabrina's creepy birthday bash!

(SPOT.ph) Sweet 16 celebrations are usually associated with pink banners, sparkly tiaras, and even a brand-new ride. But Sabrina Spellman’s is different. Instead, she gets candlelit gravestones, caped ushers—oh, and the life-altering decision to be either just a mortal or a witch. That’s what happens in Netflix’s Chilling Adventures of Sabrina, at least. The show, written by Roberto Aguirre-Sacasa and created by Greg Berlanti, Sarah Schechter, and Lee Toland Krieger—who also worked on Riverdale—is set to stream on October 26.

Chilling Adventures of Sabrina stars Kiernan Shipka (whom you might remember as Sally Draper from Mad Men) as the titular half-mortal, half-witch. In the series, Sabrina lives with her two witch aunts—Zelda (Miranda Otto) and Hilda (Lucy Davis)—and cousin Ambrose Spellman (Chance Perdomo). As for her human side, she goes to school at Baxter High and she’s dating the ever-charming Harvey Kinkle (Ross Lynch). Sabrina’s mortal and witch sides have been separated, but now that she’s turning 16, they’re forced to meet since she has to decide if she wants to be a witch or a mortal. It doesn’t help either that her favorite teacher Mary Wardell (Michelle Gomez) got possessed by the demon’s handmaiden, turning her into the manipulative Madam Satan.

Needless to say, the show is darker than the Sabrina show you probably grew up watching. There are no laugh tracks and there's no Melissa Joan Hart here. Though Netflix’s Sabrina does still have a black cat named Salem—he just doesn’t talk.

Before you binge-watch your way through the series, hear what the cast has to say about the show. SPOT.ph got to sit down with the cast of Chilling Adventures of Sabrina during the New York Comic Con to talk about what fans can expect—and whether they’d want to have a crossover with Riverdale in the future.

“I think fans are gonna love the show because it does have a lot of qualities that the Chilling Adventures comics have. It stays true to the Sabrina story and the classic characters,” Shipka says. But to put it simply, Lynch, Gomez, and Perdomo say, “Everything!”

Surprisingly, the younger members of the cast—a.k.a. Shipka, Lynch, and Perdomo—didn’t watch the old Sabrina show. Instead, it was Davis and Gomez. Davis sees no need to compare the two, while Gomez says, “It was beautiful! It was perfect for its time. It was groundbreaking in the '90s, but now, we’re doing a reimagined version of it that’s much more suitable for a much more sophisticated audience.”

But that’s not the only show that they’re connected to. Of course, we had to ask them about Riverdale and whether or not there’s a crossover happening soon. “That would be awesome!” Perdomo exclaims. But the other cast members seem to be hush-hush about the whole thing—though they do acknowledge it as a possibility.

Since Sabrina has to decide between her witch side or her human side on the show, we asked the cast about which one they’d rather be. “I might be biased, but I think I’d rather be human,” Shipka jokes. Still, for the rest of the cast, the magic and the spells of witches sound too good to pass on.

And because the show centers around Sabrina turning 16, we also asked the cast about their dream Sweet 16. Perdomo, Lynch, and Gomez were very descriptive about their ideal party, with doves, limos, and yachts included.

While the cast had their own ideas for their own birthday bash, Sabrina actually threw her own party here in Manila on October 20 at 20:20 and XX:XX. The party was every bit as eerie and creepy as you would imagine—with a black carpet and gravestones welcoming the costumed guests. Lighted candles were everywhere and led the way to the mysterious apple tree, the gothic glam shoot area, and the cool photobooth (where you sign a coven contract with your snapshot). The guests also walked through the Spellman Mortuary that had some of them running to the next room. No worries, though, as they were treated to a special screening of the first episode of Chilling Adventures of Sabrina.

Chilling Adventures of Sabrina starts streaming on Netflix on October 26.

More stories from Spot.ph
Your guide to thriving in
this strange new world.

Kiernan Shipka Chilling Adventures Of Sabrina Netflix Interview
Your Guide to Thriving in This Strange New World
Staying
In? What to watch, what to eat, and where to shop from home
OR
Heading
Out? What you need to know to stay safe when heading out