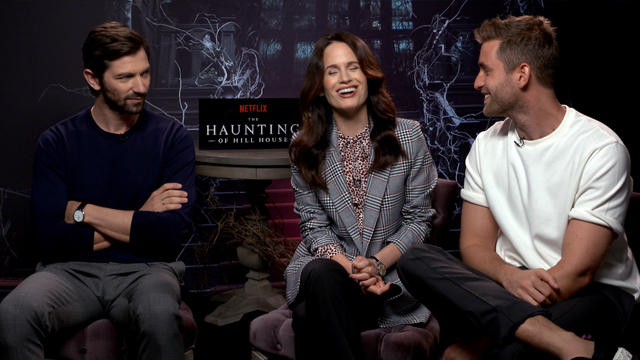 Plus how they prepared for their roles.

(SPOT.ph) Horror fans have had quite the year—what with Hereditary and A Quiet Place terrorizing them in the cinemas. But they've got something new to keep them awake at night (probably with the lights turned on): The Haunting of Hill House. The new Netflix series follows the Crain family as they move into—you guessed it—a haunted mansion called Hill House. But while they're haunted by paranormal creatures and spirits, they're also followed by their own personal demons. SPOT.ph got to talk to some of the cast members, including Michiel Huisman, Elizabeth Reaser, Henry Thomas, Victoria Pedretti, Oliver Jackson-Cohen, and Kate Siegel about what makes their show so terrifying.

When asked about what they think fans will love about the show, Siegel says, "I think they'll love the unexpected. Those who were expecting to be terrified the whole time will find themselves falling in love with these people." Siegel plays child psychologist Theodora Crain, who is the middle child of the Crain family. Jackson-Cohen echoes her sentiment saying, "They're tuning in to watch what they think is just a horror show and actually it becomes something so much more than that." He, on the other hand, plays Luke Crain, who is struggling with addiction.

Huisman explains that to prepare for his role as Steven Crain—the eldest of the family who also writes about their experience living in the haunted mansion—he spent time with the cast during pre-production. As for Reaser, who plays the mortician Shirley Crain, she reveals that she worked with an actual mortician and even watched a lot of embalming videos.

The cast also acknowledges that putting together horror and family makes the show all the more terrifying. "It keeps it real!" Pedretti says. She plays Eleanor Crain, who's still recovering from the horrors of living in Hill House as a child.

The Haunting of Hill House is now streaming on Netflix.