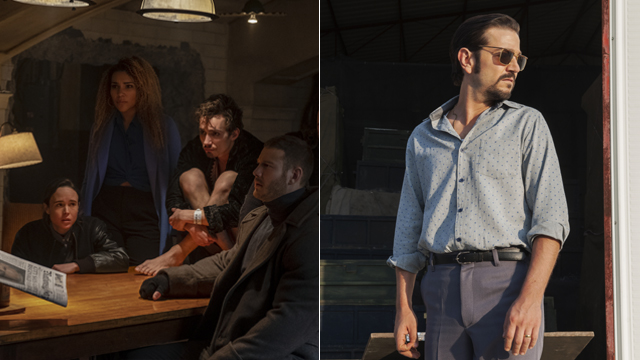 All the highlights from See What's Next Asia, announcing the streaming service's upcoming slate.

(SPOT.ph) It’s been a pretty exciting year in the Netflix universe, with Season 2 of Santa Clarita Diet making a splash in Manila in the first quarter of 2018, and a reboot of classic TV series Lost in Space creating a lot of buzz before everyone swooned with To All the Boys I’ve Loved Before in August. It almost goes without saying that 2019 is going to be just as packed, and in a two-day event being held November 8 and 9 at Marina Bay Sands in Singapore, the streaming giant gave Southeast Asian media members a glimpse at their upcoming slate.

Netflix’s See What’s Next Asia put the spotlight on both new shows and returning original series, one of the most exciting of which is, not surprisingly, Narcos: Mexico. Pivoting from previous seasons that traced the growth of the Colombian cocaine trade under Pablo Escobar, Narcos: Mexico stars Diego Luna as Miguel Ángel Félix Gallardo, the man behind Guadalajara’s first drug cartel. Michael Peña plays Enrique “Kiki” Camarena, the DEA Agent who would make it his mission to take Gallardo down. Both Luna and Peña were in Singapore to talk about their show, which will be released on November 16. “I’ve been in only the hotel so far and it’s as big as some cities. I might not even have to leave,” said Peña.

One of the most anticipated returning series of the year, though, was arguably House of Cards, whose final season, released November 2, features Robin Wright’s Claire Underwood as the first female President of the United States. When asked what she liked most about her ruthless character, Wright said, “She was a good wife; she stood by her man—“ she paused and joked, “Trying to think of something else…” The man she was referring to, of course, was Frank Underwood, played by Kevin Spacey, who was embroiled in a sexual misconduct controversy in 2017 and was not mentioned at all during the event.

Two new series have been generating plenty of excitement, for various reasons: The Umbrella Academy, based on Gerard Way’s graphic novels published by Dark Horse Comics. The show, to be released on February 15, 2019, is about a group of misfits with extraordinary abilities. Its eye-catching cast includes Mary J. Blige, Ellen Page, and Robert Sheehan, who described the show as one about failures: “It’s okay to fail; in fact, failure is absolutely necessary to success. Human beings, we all fail.”

Netflix prides itself on its very localized approach to content, and a great example of that is Kingdom. The epic is set in Chosun Dynasty-era Korea and tells the nail-biting story of a zombie-spawning disease. It’s directed by Kim Seong-hun and will be released on January 25. Writer Kim Eun-hee summed it up with a warning that’s sure to excite horror-movie fans: “You’ll see a lot of blood, heads being chopped off, people getting killed.” After getting a sneak peek of the first two episodes, we guarantee it’s not for the faint-hearted.

Other shows and movies to look forward to in Netflix’s 2019 lineup are The Last Summer with Riverdale’s KJ Apa and the rom-com Always Be My Maybe, with Ali Wong and Randall Park. There’s also 6 Underground, directed by Michael Bay and starring Ryan Reynolds, and a number of exciting anime series, including one based on Pacific Rim and Filipino graphic novel Trese.

It’s a lot to take in, but it’s still just a fraction of what the streaming service has in store. Better get a year’s supply of popcorn ready.