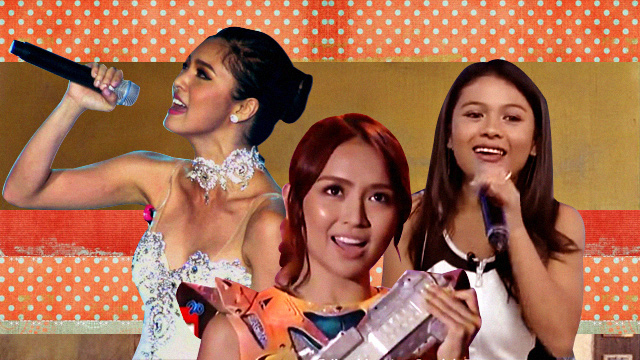 (SPOT.ph) In the Pinoy entertainment industry, if you’re a celebrity, you have to be an all-around performer. So you’re not only an actor—you’re a singer and dancer, too. These celebrities get to showcase their talents (or their incredibly rehearsed performances, at least), when they go on their respective network’s variety show, like ABS-CBN's ASAP, or GMA's SOP and Party Pilipinas. Throughout the years, there have been countless memorable performances and we list down some of the most unforgettable (not to mention meme-worthy) ones.

Ever since Regine Velasquez announced that she’ll be moving from GMA to ABS-CBN, fans have been worried about the former network not having any singers left. Well, that is until they unearthed this gem of a video with Marian Rivera singing Rihanna’s “Unfaithful.” Just listen to it once and it’s sure to be stuck in your head for the next three hours. Story of our lives.

Kim Chiu and Enchong Dee’s “Where Have You Been"

It’s a good thing the video of Kim Chiu and Enchong Dee’s dance performance of “Where Have You Been” isn’t in high definition. If it was, you’d be sure it would be even more of a meme than it already is. In Dee’s defense, the choreography for their upbeat number really looks difficult—but you still can’t help but feel bad for Chiu when she literally hits the floor.

We all need a little help when it comes to singing on the karaoke—and maybe that’s what Barbie Forteza was going for during one of her performances on the now-defunct Party Pilipinas on GMA. While performing her song “Meron Ba,” she walks around the stage while dutifully singing the lyrics. And while her live singing voice is crystal clear, so is the audio track playing in the background for lip sync purposes. Maybe she just needed a back-up singer.

The crowd—and the Internet—was anything but silent during Kim Chiu and Yassi Pressman’s sizzling dance performance. In the number, Chiu has to completely lie down on a clear plexiglass-like board, but the stunt doesn’t go as planned. You'll soon find yourself watching the clip through your fingers as she struggles before completely falling off of the board.

With a talent like Regine Velasquez performing on stage, the crowd did nothing but listen to Asia’s Songbird when she took on Beyoncé’s famous song from Dreamgirls. The only thing is, she didn’t exactly sing the right lyrics when she got to “Now I'm done believing you.” Instead, it sounds like she sang “I am the dog who leave you.” But hey, she’d still probably score a 100 on the karaoke.

Kim Chiu is such a great performer, she made this list not once, not twice, but thrice. This time, it’s for her performance of Jessie J’s “Flashlight” during her The FUNtasy Concert in 2016. Despite being a bit pitchy during the verses, you have to give her props for doing her best to the point that she even kneels as she belts out the song’s high AF notes. Well, at least she didn’t get injured this time around.

You’ve got to give Karylle props for her Filipino rendition of Beyonce’s hit, “Irreplaceable" that she performed on GMA's old show, SOP. It’s difficult to sing the song in a different language especially if the English lyrics are probably what’s playing in your head. It's been dubbed the "Marijuana Version"—but that's not because of the "high" notes. In other versions of the Tagalized hit, one of the lines is supposed to be “Akala mo siguro di ko malalaman.” Instead, the GMA version includes the line, “Anong akala mo sa’kin, marijuana?” And yes, those lyrics were actually flashed on national television.

This number on ASAP was—and still is—a rare event, what with teen superstars Janella Salvador, Julia Barretto, Liza Soberano, and Kathryn Bernardo all on one stage. Decked out in futuristic costumes (with a toy gun in hand), the four girls sang “Break Free” while battling aliens. And if you were expecting an all-out birit during the climax of the song (it is an Ariana Grande hit, after all)...then you probably won’t get it. You can’t blame Bernardo though—that’s a really high note.

Lyca Gairanod’s rendition of Camila Cabello’s “Havana” isn’t exactly a variety show performance, but it was still a live rendition on ABS-CBN’s morning show, Umagang Kay Ganda. She nailed the attitude and the notes that come with the song, but the actual verses were a little bit hard for her (and the audience) to decipher.

Jason Derulo’s “Swalla” is just about the perfect song to have a dance showdown to, and that’s what Maja Salvador did with Kira Balinger, Maris Racal, Andrea Brillantes, Ylona Garcia, and Loisa Andalio. But among the six girls who performed, Racal and Andalio’s fierce dance moves and edgy looks caught the eye of social media users.