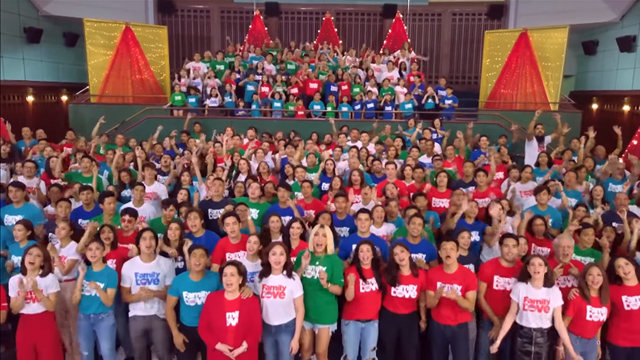 This year's theme is Family Is Love.

(SPOT.ph) The holidays usually mean long lines at the mall, wish lists waiting to be fulfilled, and spending quality time with your loved ones. For Pinoy entertainment fans, it also means the release of a new Christmas station ID from the TV networks. Case in point: ABS-CBN has released their highly anticipated video which stars, well, all of their stars (around 400 of them to be exact!), singing a new song called "Family Is Love."

There's a five-minute lyric video that features just the celebrities—from love teams like KathNiel and JaDine to the cast of Ang Probinsyano and It's Showtime!—singing their parts. But there's also a 13-minute version that features some of the biggest news stories this year, as well as telling the heartwarming stories of Pinoy families. While you're busy figuring out who dated whom (and how they got to put them all in one room), there's still a lot to unpack from the 13-minute video, so we list down the moments you shouldn't miss.

The Story of the Garcia Brothers

One of the first stories that the video features is that of the Garcia family, whose three sons are all in the army. Their mother opens up about not having them all home despite their promises to spend their holidays with the family.

The Story of Lorlie Noblezada

Lorlie Noblezada shares a story that would be familiar to many Pinoys. While working multiple jobs, she managed to get a scholarship and finish her studies while also taking care of her eight children.

The Story of Dr. Viktorija Cirvinskaite

The video doesn't just talk about Pinoy families in the traditional sense. Residents of Talim Island in Rizal talk about the struggles they had to go through when they had no available doctors in the area. That is, until Dr. Cirvinskaite decided to move there and help the residents. Now, she's become part of their families.

The Story of Margielyn Didal and the Didal Family

In case you didn't know, Margielyn Didal won a gold medal at the 2018 Asian Games for skateboarding. She opens up about her parents always supporting her and cheering her on and being supportive of her being part of the LGBT community.

Angel Aquino and Tony Labrusca Spawning Yet Another Meme

The stars of iWant's highly anticipated Glorious made rounds on the Internet earlier this November when a photo of them (intensely) making out became a meme. And it seems that fans still can't get enough of the two since there's another photo going around of a moment where Labrusca is looking—dare we say gazing?—at Aquino during the filming of the station ID.

Of course, what's a station ID without the network's top love teams? Kathryn Bernardo, Daniel Padilla, Joshua Garcia, Julia Barretto, James Reid, Nadine Lustre, Liza Soberano, and Enrique Gil all take turns singing at a makeshift studio. And it's no surprise that each couple shares a kilig-worthy moment, either.

Performances by Different Singing Groups From Around the Country

And no, we don't mean the up-and-coming boy bands and whatnot. The video also featured voices of and performances from the PhilHaromic Orchestra, University of Santo Tomas Singers, ABS-CBN Philharmonic Orchestra, AFP Chorale, Ramon Magsaysay High School Chorale - Manila, and Koro Bangkal Magbikin.

Any true Pinoy movie fan would immediately recognize the two stars and remember the unforgettable scene they shared in 1994's Minsan Lang Kitang Iibigin. We're pretty sure Soriano wasn't holding a knife behind Padilla's back this time around.

After Regine Velasquez made the controversial move from GMA to ABS-CBN, you can only expect her to be the star of everything. It's nice to finally see her share the screen with her real-life husband Ogie Alcasid—and singing together at that. She also hits a few high notes with none other than Sarah Geronimo.

All of the Celebrities Hanging Out Together

Well, it might still be part of the shoot, but it's nice to see all of your favorite stars getting together and bonding. From Vice Ganda greeting Coco Martin and Susan Roces, to Toni Gonzaga, Sarah Geronimo, Angel Locsin, Kim Chiu, Pia Wurtzbach, and Alex Gonzaga eating street food, it almost makes you wish you were part of the video, too.