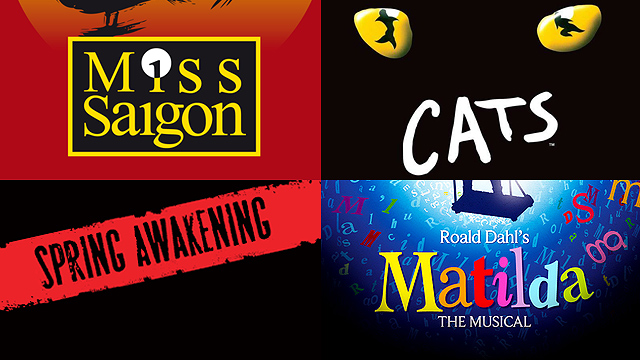 10 Musicals We Can't Wait to See on the Silver Screen

New shows to sing through!

(SPOT.ph) It cannot be denied that theater and film are two incomparable genres. On stage, you have the beauty of live performance amid an imagined spectacle to bring you to a different world; on the big screen, you have the power of special effects and perfected scenes after a series of “action” and “cut.” Adapting a story from one medium to another, like theater to film, is a different story altogether—pun intended. There’s the added challenge of recreating a two-act performance into a two-hour reel; but at the same time, there’s more room to play around with the passage of time and expansion of space behind the camera.

In the next few years, Broadway and West End fans are treated to an exciting lineup of movie musical adaptations that will surely be remembered. Only a handful of them have a release date, but the rest are already in the early production stages. Who else can’t wait for these to hit the big screen?

When Wicked's international tour came back to Manila in 2017, Ozians (fans of the musical) everywhere can't get enough of the jaw-dropping stage design and LSS-worthy songs. You can just imagine how many people would be delighted to know that an adaptation of the Stephen Schwartz original is in the works. Wicked is a retelling of the tale once created by L. Frank Baum in the children's book The Wonderful Wizard of Oz. It follows the unlikely but profound friendship between two sorcery students—popular girl Glinda and green-skinned girl Elphaba. In an interview with Variety, Schwartz revealed that the film will feature "at least two" new songs. It was supposed to be released in December 2019, but was struck out from Universal’s roster as of writing. The artist, however, assures everyone that "100% there will be a movie of Wicked and it won’t be that far away."

If the title sounds familiar, that’s because it’s the same name of Green Day’s hit album in 2004. Five years later, Billie Joe Armstrong joined forces with Michael Mayer to create the sung-through rock musical American Idiot which premiered at the Berkley Repertory Theater in 2009 before opening on Broadway in 2010. Theater-goers in Manila may already be familiar with the musical since it was staged by 9 Works Theatrical in 2016. The story, set in post-9/11 United States, follows the journey of three young men as they face the harsh realities of the world around them and deal with issues of teen pregnancy, war, and drugs. While the musical is written by Billie Joe Armstrong, the screenplay is by Rolin Jones as the Green Day vocalist is set to take an on-screen role.

A sung-through musical by Andrew Lloyd Webber, Cats premiered in the West End in 1981 and on Broadway in 1982. It follows a tribe of—well, cats. Calling themselves the Jellicle Cats, these singing feline creatures break the fourth wall to introduce themselves and their talent to the audience. It is an important night, after all, and the Jellicle patriarch named Old Deuteronomy is choosing which cat will soon be reborn.

With music and lyrics by Lin-Manuel Miranda, In the Heights features the colorful life of a largely Hispanic-American neighborhood in Washington Heights in New York City. At the center of the show is Usnavi de la Vega (Anthony Ramos), a young bodega owner who has mixed feelings about closing his store and leaving the tight-knit community behind. The film adaptation was supposed to be distributed by The Weinstein Company, but Miranda and playwright Quiara Alegría Hudes opted to bring it elsewhere following the Harvey Weinstein scandal. Warner Bros. Pictures now has the film rights.

This jukebox musical by Douglas McGrath tells the life story of Carole King (you may know her as the voice behind Gilmore Girls' theme song "Where You Lead"). It premiered in San Francisco in 2013, opened on Broadway in 2014, graced the stage of Aldwych Theater in West End in 2015—and in case you don't know yet, a local production will be staged by Atlantis in 2019. The film adaptation will be produced by Tom Hanks, Gary Goetzman, and Paul Blake.

Matilda, which was based on Roald Dahl’s 1988 children's novel of the same title, opened in 2010 before its West End premiere in 2011 and Broadway premiere in 2013. While there was already a 1996 film adaptation, the upcoming Matthew Warchus film will incorporate songs from Tim Minchin's musical as well as additional tracks. Pre-production started in 2016, but a release date is yet to be announced.

Spring Awakening, a rock musical by Duncan Sheik and Steven Sater, is based on the 1891 German play of the same title by Frank Wedekind. It opened on Broadway in 2006 with Jonathan Groff as the lead star, and went on to sweep the Tony Awards. The musical dares to explore the sexual awakening of young men and women in conservative 1891 Germany.

If you loved Rent, then you’d definitely love Tick, Tick...Boom! (if you already haven't). The latter is Jonathan Larson's semi-autobiographical musical, which tells of the sacrifices he made to achieve his big break in theater. It was first performed as a monologue under the titled Boho Days in 1990, six years before Rent went on to win the Pulitzer Prize, Tony Award, and Drama Desk Award. After Larson unexpectedly died the morning of Rent’s first preview performance (his big break), playwright David Auburn revised Tick, Tick…Boom as a three-character play that opened Off-Broadway in 2001. The adaptation will be Lin-Manuel Miranda’s movie directorial debut. Netflix has acquired the rights for the upcoming film.

The 1957 Broadway musical West Side Story is having a fresh film adaptation under the helm of esteemed director Steven Spielberg. It was first adapted on the big screen in 1961 and won the Academy Award for Best Picture, Best Director, Supporting Actor and Actress, among many others. West Side Story, dubbed as the Romeo and Juliet of 1950s New York, follows the forbidden love story of Maria and Tony who fall in love at first sight during a party attended by their rival groups. In an interview with Vanity Fair, screenwriter Tony Kushner reveals that the new film will take cues from the original Broadway show and not the Oscar-winning movie. Filming is set to begin in 2019.

Miss Saigon, a musical by Claude-Michel Schönberg and Alain Boublil, premiered in West End in 1989 and opened on Broadway in 1991. It is especially familiar to Filipinos after actress Lea Salonga played the lead role of Kim in both foreign productions. Monique Wilson and Joanna Ampil also starred in the international tours while 10 more Filipino talents joined in the recent U.K. tour. Miss Saigon tells the tragic love story between an Asian woman and her American lover in 1970s Saigon during the Vietnam War. The film adaptation is expected to come out in 2020, but an official release date is yet to be announced.

UPDATE (July 19, 2019): This article has been updated to include recently announced release dates, trailers, and other details.