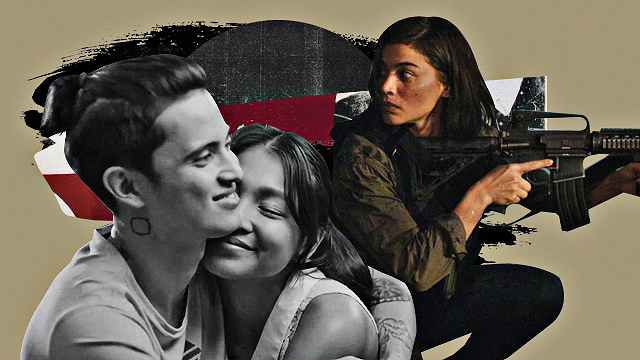 (SPOT.ph) Another long weekend—and a couple of holidays—are coming up. That means you finally have time to watch everything you’ve been putting off because of work. Well, at least you pretend to put them off, because you probably binge-watch as soon as you get home, anyway. At least this time, you can do so without any guilt or worry that your paperwork is piling up while your show was buffering. And to help you get started, we list down the most exciting additions to multiple streaming platforms so you can make the most out of your holiday vacation.

Watch it on: Netflix and iWant
There have been a lot of reboots over the years, but nothing quite compares to the original, Taiwanese Meteor Garden which stars Jerry Yan as Dao Ming Si and Barbie Hsu as Shan Cai. Now, you can watch Shan Cai choose between Dao Ming Si and Hua Ze Lei (Vic Zhou) again on Netflix and iWant. The Filipino-dubbed 2018 version of the show is also available on iWant, just in case you want to compare.

Watch it on: iWant
There’s no denying the chemistry that Angel Aquino and Tony Labrusca have in this romance-drama—they went viral for a reason. Glorious follows the relationship of Glory (Aquino) and Niko (Labrusca), and the struggles that come with their 30-year age gap. But of course, the movie also includes all the steamy scenes that come (wink, wink) in between. You might want to watch it all alone in your room (so you can keep your shrieks to yourself) or you can make it a viewing party with your S.O. or your friends (so you can all shriek together).

Watch it on: HOOQ
There was a lot of hype surrounding this movie—and for good reason. It’s the first Hollywood movie in decades to star an all-Asian cast. Not to mention, it also features two Pinoy actors: Nico Santos (who plays Oliver) and of course, Kris Aquino (who plays Princess Intan). You can catch them onscreen while falling in love with Rachel (Constance Wu) and Nick's (Henry Golding) crazy, swoon-worthy story all over again.

Watch it on: iflix
It’s been a while since we last saw John Lloyd Cruz on the big screen, but at least we’ve got his movies to keep us company. You can stream the highly anticipated sequel to One More Chance on iflix and watch as Popoy and Basha (Bea Alonzo) try to figure life out as a married couple.

Watch it on: Fox+
Fans of everything creepy will enjoy the latest season of American Horror Story (AHS). This time, the anthology series entitled Apocalypse puts together AHS: Murder House (the first season) and AHS: Coven (the third season) into one spine-tingling story. It’s set in a post-nuclear blast West Coast, where humans with strong genes live (and are tortured) in an underground bunker—that is, until the Antichrist arrives. Previous AHS cast members Sarah Paulson, Kathy Bates, Evan Peters, Emma Roberts, Taissa Farmiga, Gabourey Sidibe, Billie Lourd, Jessica Lange, and more, star in the new season.

Watch it on: Netflix
BuyBust wowed international critics when it first premiered abroad, so it’s no surprise that it took over local cinemas when it opened in the Philippines. You might not have been able to brave the long lines at the movies, but the good news is, you can catch Anne Curtis in action as a PDEA agent on Netflix. Just make sure you have your popcorn ready because Erik Matti’s stunning visuals and thrilling action scenes will have you on the edge of your seat.

Watch it on: Amazon Prime Video
For a different kind of comedy, you might want to check out The Marvelous Mrs. Maisel on Amazon Prime Video (which is exclusively available to Globe subscribers). The series, set in the ‘50s, revolves around Midge Maisel (Rachel Brosnahan), a housewife with the perfect life who decides to pursue career in stand-up comedy in New York. The show, which is helmed by Gilmore Girls creator Amy Sherman-Palladino, has won multiple Emmy and Golden Globe Awards.

Never Not Love You

Watch it on: HOOQ
Reel-turned-real couple James Reid and Nadine Lustre are working on different projects now—with Reid working on Pedro Penduko while Lustre films Ulan with Carlo Aquino. But you can still watch them together in Never Not Love You. In the film directed by Antoinette Jadaone (That Thing Called Tadhana), JaDine plays a couple who are torn between their relationship and pursuing their dream careers.

Watch it on: Disneylife
It was back in 2015 when audiences fell in love with the adorable Baymax and the brilliant Hiro in Big Hero 6. While fans are still keeping their fingers crossed for a possible sequel (Could Tadashi still be alive?), they can catch the adventures of the duo (and their friends Go Go Tamago, Wasabi, Honey Lemon, and Fred) on a new series based on the movie. Big Hero 6: The Series is helmed by Mark McCorkle and Bob Schooley—the creators of Kim Possible. They also worked on other animated shows like Penguins of Madagascar and Monsters vs. Aliens and wrote movies like Hotel for Dogs, Sky High, and Disney’s The Lion King 2: Simba’s Pride.

Watch it on: HBO Go
If you’re a fan of mind-bending shows and movies, then Sharp Objects is right up your alley. The new show is based on Gillian Flynn’s book of the same. (Flynn is also the author of the WTF-worthy Gone Girl, btw.) It stars Amy Adams as Camille, a crime reporter who just got out from a psychiatric hospital. She investigates the deaths of two girls in her hometown and if that’s not creepy enough, it’s also helmed by Jason Blum, the producer of Get Out.