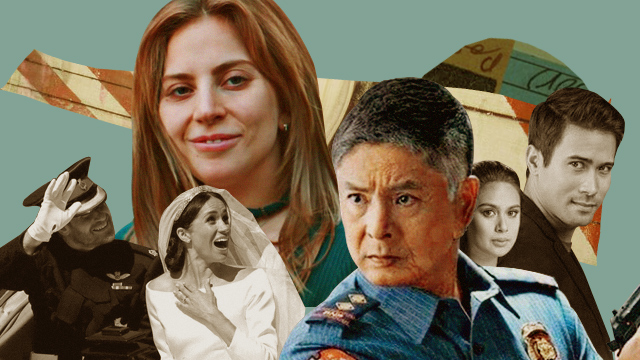 You can't scroll without a LOL.

(SPOT.ph) The year is coming to a close, which means we’ve scrolled through (and laughed at) another 12 months’ worth of memes. While memes can practically come from anything—from a random photo to a viral video—the funniest ones also come from blockbuster movies, hit TV shows, and big pop-culture events. So, before the year ends, we round up the ones that made us all laugh out loud.

To All The Boys And Girls Selling Lanterns On The Street pic.twitter.com/1VHQqB2wnG

Lara Jean (Lana Condor) dedicated the letters she wrote to her secret crushes, hence, To All the Boys I’ve Loved Before. Leave it to the Internet to give the movie its own spin and for Pinoys to use their hugot to make their own titles. From “To All the Boys Who Ghosted Me” to “To All the Boys Na Nagpaasa Sa’Kin,” there’s sure to be one everyone can hilariously (but unfortunately) relate to.

The whole Internet lost it when the trailer for iWant’s Glorious was first released. You can’t blame them though, because it’s hard to keep your cool when you see Labrusca and Aquino’s steamy AF makeout scenes. The trailer’s thumbnail, in particular, became a meme for when people want to express how much two things go together—or for making jokes about how they actually use their tongue.

When Avengers: Infinity War first came out, the directors and the stars of the movie wanted to make sure that fans wouldn’t spoil the movie for others who were going to watch. But fans found a loophole and started posting out-of-context “spoilers” and used images that are totally unrelated to the movie as some sort of clue to the plot. The photos ranged from a stoic Squidward to Naruto doing a technique where he clones himself. Admittedly, it was fun figuring out the references that the memes made.

Primetime teleserye Halik offers fans their daily dose of relationship drama, since it revolves around couples cheating on each other. One scene in particular stood out, when Lino (Jericho Rosales) helplessly looks on as Jade (Yam Concepcion) and Ace (Sam Milby) make out right in front of him—without them knowing at first. Pinoys made the funny image their own and added their own labels to the characters.

Prince Harry and Meghan Markle at the Royal Wedding

There were a lot of guests at Prince Harry and Meghan Markle’s May wedding. It is, after all, one of the most highly anticipated weddings of the year (if not the decade). Their guest list included big names—from Markle’s Suits co-stars to George Clooney, Serena Williams, and Priyanka Chopra. But the Internet also wanted to invite other stars and they used a perfectly timed photo to make it seem like the couple was greeting Mr. Bean, Will Smith, and Rihanna.

The Disintegration From Avengers: Infinity War

Given how big of a movie Avengers: Infinity War is, it’s not surprising that it spawned a lot of memes. This time, it’s from the end of the movie when (spoiler alert!) half of the universe disappears and the heroes start disintegrating and turn to dust. Combined with Spider-Man’s (Tom Holland) line, “I don’t feel so good,” the dust-effect meme was probably just the fans’ way of coping with the movie’s heart-wrenching end.

One of the most memorable scenes from Lady Gaga and Bradley Cooper's critically acclaimed movie is when he calls her attention, only for her to tell him that he wants to take one more look at her again. Memes then started popping up with different parodies of the scene.

“Is this your king?” from Black Panther

Bills: Is this your paycheck?! pic.twitter.com/FbrhBzBAN4

Before Avengers: Infinity War came out, everyone flocked to the cinemas to watch another Marvel movie: Black Panther. In one scene, Killmonger (Michael B. Jordan) is in a traditional battle with T’Challa (Chadwick Boseman) to decide who the rightful king of Wakanda should be. At one point, Killmonger gets the upper hand while T’Challa struggles to even stand up. This prompts Killmonger to question everyone watching, “Is this your king?!” People on the Internet then started replacing the last word and using it for their own needs.

Pinoy pageant fans will always be the funniest—and you only need to look at the comments section of Miss Universe’s Facebook page. When they posted a photo of the Philippines’ bet, Catriona Gray, people from “all around the world” expressed their support for the beauty queen. In reality though, they’re Pinoys who made puns out of their hometown’s names. So when they say New York, they mean New York, Cubao, and when they say Thai, they mean Taytay, Rizal. You can only expect them to be even more entertaining when the actual Miss Universe event happens.

The Nth Season of Ang Probinsyano

It’s been a long-running joke that Coco Martin-starrer Ang Probinsyano has been, well, long-running. It started back in 2015 and it shows no signs of ending any time soon. One fan edited Cardo (Martin) to look like he’s aged, with the announcement that the show is ending in two weeks—but in 2048. Even Martin posted the meme on his own Instagram page, where his co-stars and other actors also expressed their amusement and support for the show.