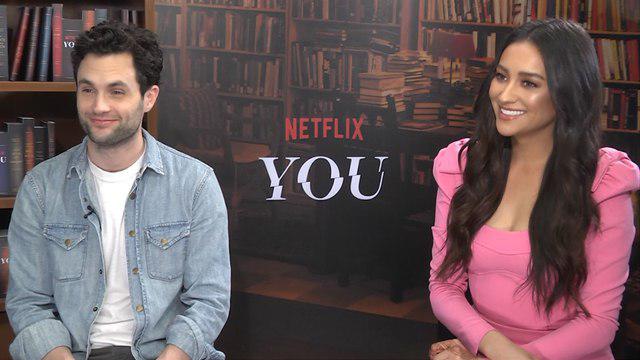 Yes, Even Penn Badgley Thinks Peach Deserves Better on You

Read on to find out what else they revealed about the show.

(SPOT.ph) If you've checked out Netflix this month, then chances are you've probably already watched their new thriller, You—and after seeing the last episode, you've probably been left with a couple of questions. Luckily, we got to ask Penn Badgley and Shay Mitchell, the stars of the show themselves, about their characters, fan reactions, and the second season of the show. Badgley and Mitchell are currently in Manila to promote the show and attend a special fan event at The Greenbelt Gallery tomorrow, January 15, at 5:30 p.m.

In case you need a refresher, Badgley plays Joe Goldberg, a bookstore manager fighting for the affection of grad student Beck (Elizabeth Lail). One of his enemies? Peach Salinger (Mitchell), Beck's ultra-rich and ultra-suspicious best friend.

If you've seen the sixth episode—which, by the way, is Mitchell and Badgley's favorite—then you might have some mixed feelings about what happens to Peach. When asked if Mitchell agrees with fans saying that her character Peach deserves better, she says, "I would've liked to see her last a little longer, to be honest. But yeah, I mean, it is what it is. She was really, really fun to play." Badgley wholeheartedly agrees. "Can we be clear? Peach does deserve better. Everyone on the show, except Joe, deserves better. Joe deserves worse," he says.

Mitchell then asks Badgley if he thinks Peach would've gotten on Joe's level of stalking. "Theoretically, but I think like, statistically speaking, most murders and most serial killers, they're men. I think Peach, maybe she would've been one of the exceptions to the rule," he explains. Still, he believes Peach and Joe have different feelings for Beck. "I feel like Peach loves Beck. Joe loves Beck, but we all know what happens to Beck!"

But what is it about Beck that attracts stalkers? "I mean, she's just like, she's a Disney princess," Mitchell answers. "No, Beck, not Elizabeth," Badgley jokes. "Oh okay, never mind, Elizabeth is a Disney princess," Mitchell replies. (In case you didn't know, Beck played a Frozen-inspired character named Anna on Once Upon a Time.) Mitchell reasons though, that Beck is "light, and airy, and enjoyable to be around."

No matter what the answer is though, we're sure to see more of the creepy and stalker Joe in the second season.