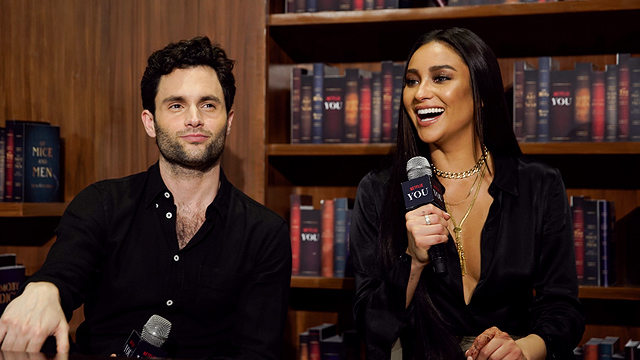 Plus, you can still visit the cool booth they were in!

(SPOT.ph) Ever since it was announced that Penn Badgley and Shay Mitchell were coming to Manila to promote their new show, You, fans just couldn't get enough of the two. Fans were lined up outside Greenbelt 5 in Makati even before the mall opened.

Not everyone got to go into the Greenbelt Gallery, but loyal fans waited by the sidelines in front of the stores just to catch a glimpse of the two stars

When Mitchell and Badgley finally arrived, they were met with screaming fans who would scream even louder when the two looked their way.

They were asked a few questions about their trip to Manila by host Joyce Pring and Badgley shared that he got to eat halo-halo again after trying it on his first day. Mitchell, whose mom is Filipina, also had him try turon, which he loved.

The two share that they were overwhelmed by the warm welcome they received from fans. When they were asked about how it feels to see the show become such a big hit, Badgley answered, "It feels very sudden. Because I feel like just a few weeks ago, it wasn't much of a thing and now everyone's seen it. It's very surreal." Mitchell agreed, saying, "I mean, it's incredible—just to have people watch it on a global scale and fall in love with the show."

In the show, Badgley's character Joe Goldberg does a few sweet (though mostly creepy) things for Beck (played by Elizabeth Lail). Pring then asked Badgley about the sweetest thing anyone's ever done for him, to which he answered, "When my wife agreed to marry me." And while that might have broken fans' hearts a little bit, it made them all say "aww" in unison. "Beat that!" Badgley jokingly said to Mitchell.

Even Mitchell was impressed with his answer, though her answer was pretty sweet, too. "I think thoughtfulness goes a long way. It's the little things that really impress me," she shares.

During the event, the two also took the time to surprise lucky fans. In a video posted by Netflix, Badgley narrates their trip to Manila in a way only Joe can. Fans got to see the stars up close in a glass room that might look familiar. That's because it looks just like the glass room in Mooney's Bookstore in the show—complete with an armchair and books.

Mitchell and Badgley may have already left Manila, but it's understandable if you still can't get enough of the show. Or maybe you're still on a high from getting to see them. You can still visit the Mooney's Bookstore set-up at Greenbelt Gallery on the second floor of Greenbelt 5 until January 19.

You Netflix Shay Mitchell Penn Badgley
Your Guide to Thriving in This Strange New World
Staying
In? What to watch, what to eat, and where to shop from home
OR
Heading
Out? What you need to know to stay safe when heading out