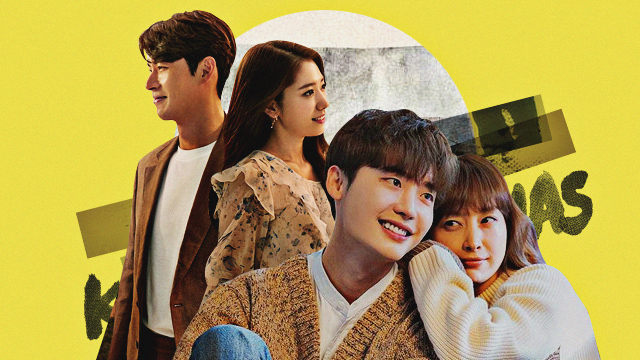 (SPOT.ph) The year has just kicked off, and we’re already excited for all the new TV shows headed to our TV screens! Whether you enjoy romance or maybe you’re into period dramas, there’s something for every K-Drama fan this 2019.

Memories of the Alhambra

Release date: Now streaming
Technically, Netflix’s Memories of the Alhambra started streaming in late December, but this critically beloved series is too good to ignore. Starring K-Drama favorites Hyun Bin and Park Shin Hye, this drama centers on an investor who flies to Granada, Spain in search for a mysterious game developer (Park Chanyeol) that creates an innovative augmented reality game. It’s written by Song Jae Jung, who also penned other amazing series such as Nine and W: Between Two Worlds.

Release date: January 25
One of Netflix’s biggest and most exciting new series is Kingdom, which combines period dramas, political intrigue, and zombies! Set in the Joseon period, it follows a Crown Prince (Joo Ji Hoon from Princess Hours) tasked to investigate a mysterious plague spreading across his kingdom. Avid K-Drama fans will also be pleased to know that it’s written by Kim Eun Hee, who also wrote one of the most critically acclaimed dramas ever, Signal.

Romance Is a Bonus Book

Release date: January 26
Lee Jong Suk is back in another exciting romance! The story centers on a successful copywriter who finds herself unemployed and now overqualified for every job she applies for. In desperation, she pretends to be a high-school dropout and somehow finds a job in a publishing company.

Release date: February 6
If you still can’t get over the tragic love story between Lee Dong Wook and Yoo In Na’s characters in 2017’s Goblin, you’ll get to see their sizzling chemistry all over again in this new rom-com! The latter will play an actress whose career goes off the rails after an epic dating scandal. She ends up working as a secretary in the law firm of a cold-hearted and ruthless lawyer. The show is directed by Park Joon Hwa, who was also behind 2018’s hit romance, What’s Wrong With Secretary Kim?

Release date: March 2019
Super Junior’s Choi Siwon continues to rack up his acting credits, this time playing a skilled con artist whose relationship falls apart after his ex runs off with their wedding funds. He meets and falls in love with Mi Young (Lee Yoo Young), but plot twist—she has secrets of her own, too.

Release date: May 2019
See Bae Suzy in a whole new light in this action-drama where she plays Hae Ri, a talented black ops agent. Her paths cross with a stuntman (Lee Seung Gi), who uncovers a dangerous web of deception and corruption behind a mysterious plane crash.

Release date: Early 2019
K-Drama fans are in for a treat this 2019 as Descendants of the Sun star Song Joong Ki makes his highly anticipated return to the small screen. Kim Ji Won, his co-star in Descendants of the Sun, is also part of this show. Combining Korean mythology and history, Asadal Chronicles follows the rise of the ancient empire of Asadal. Not much is known about the plot just yet, but we do know that it’s directed by Kim Won Seok, who also helmed the 2010 hit series, Sungkyunkwan Scandal.

Release date: TBA
What if technology allowed you to find out if someone is attracted to you? This is the intriguing premise for Netflix’s upcoming series Love Alarm, starring Kim So Hyun, Jung Ga Ram, and Song Gang. Based on a popular webtoon of the same name, this romance is set in a not-so distant future where an app can tell the user if someone within 10 feet of them has romantic feelings for them.

So I Married an Anti-Fan

Release date: TBA
Based on a novel of the same name, this show follows the unlikely romance between a high-profile star named Hoo Joon (Choi Tae Joon) and his biggest anti-fan, Geun Young (Soo Young). Things escalate when they both join a reality show that forces stars and their anti-fans to live together.

Release date: TBA
If you missed Nam Joo Hyuk of Weightlifting Fairy Kim Bok Joo fame, you’ll see him on your screen some time this year in another new fantasy comedy! Dabbling in intriguing themes such as age-swapping and time-bending, Dazzling is about a 25-year-old woman who mysteriously ages to 70 on the outside but stays the same age on the inside.