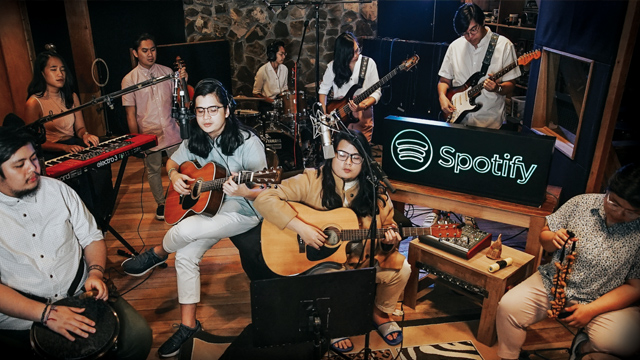 Including Ben&Ben, IV of Spades, Moira dela Torre, and more.

(SPOT.ph) We all have faint (or maybe not-so-faint—it depends on when you were born) memories of singing along to classic OPM love songs. Whether it's one of your parents' favorites, the anthem of your first heartbreak, or your karaoke go-to, love songs always have a way of staying with you. That's why you'll love Spotify Jams: OPM Love Songs, where the most-streamed OPM artists cover classic hits that will be made available on Spotify's Tatak Pinoy Playlist in February.

You'll have something to look forward to for the whole month of February because the cover songs will be released on the playlist every week. Moira dela Torre's rendition of Rey Valera's "Naaalala Ka" and juan karlos' take on VST & Company's "Ikaw Ang Aking Mahal" will be available on February 8.

In an group interview that included SPOT.ph, dela Torre says she initially chose "Naaalala Ka" because of her love for Rey Valera and because the song has always been close to her heart. But through the process, she shares that she found a deeper appreciation for the song.

"I thought it was just a love song and in the middle of recording, all of a sudden I just snapped because I saw this one line: "Sa aking alaala." It means, 'In my memories.'" She continues, "It means that the love he was talking about was something from afar." She opens up that she's still grieving her grandmother's passing and while recording the song, "It just dawned on me that this is actually a sad song. So the approach went from being a love song to actually being sadder."

Meanwhile, juan karlos' frontman, Juan Karlos Labajo reveals that the band's first choice was actually to cover "Himig Natin," by Juan Dela Cruz Band a.k.a. the song that many consider to be what helmed the sound of Pinoy rock. "We were supposed to choose that one but then Spotify was like, 'Hindi 'yan love song,'" he says with a laugh. Still, Labajo says that the song gives him nostalgic feelings about love.

As for deciding on "Ikaw Ang Aking Mahal," they say that they have their own personal reasons for choosing the VST & Company classic but it's up to the fans to make it their own. Drummer Gian Hipolito says, "Kasi medyo malawak 'yong music 'di ba? This song is a love song, but if somebody is going through something else, it might mean [something] different for them." Labajo agrees, saying, "It's all up to you...how you see the song and how you hear the song."

On February 14, you can listen to Silent Sanctuary's take on Regine Velasquez's "Pangako" and a cover from Sarah Geronimo. Silent Sanctuary's cellist Anjo Inacay says it wasn't easy to choose just one song to cover. "It was a tough choice for us because the songs were the biggest hits from before. So, I think instead of just releasing a compilation album, [it's nice that] you're gathering old hits and kind of repackaging them."

Bassist Jason Rondero agrees, saying, "[You're] reintroducing [the old songs] to the younger audience and maybe to the old fans. You're giving them a new take on a song that they can enjoy in a fresh way." Inacay concludes, "It's like a combination of the old and the new and coming up with something fresh out of it."

You'll also want to mark your calendars for February 22 for the release of IV of Spades' rendition of Rivermaya's "Kung Ayaw Mo, Huwag Mo" and Ben&Ben's cover of Jose Mari Chan's "Beautiful Girl." When asked why IV of Spades decided to cover "Kung Ayaw Mo, Huwag Mo," vocalist and bassist Zild Benitez answers, "We love the song. I think that's it." He adds with a laugh, "We just really like the song."

Ben&Ben vocalist Paolo Benjamin Guico reveals that the band chose "Beautiful Girl" because it's his mom's favorite song. He also recounts the band's interaction with Chan. "We actually did a show and Jose Mari Chan was the other artist that was with us. And it was quite an experience because he really made such a huge impact in such a short time." He continues, "He asked us to recite some lines of our songs. And for a good 30 seconds, he was just taking it in."

Guico adds, "We actually asked him if it would be okay to do a version of one of his songs in the future. And so when this project came up, of course, it was the first song that we had in mind."

There are still a few days left before the series of songs will be released, but in the meantime, you can listen to the best of OPM on Tatak Pinoy. Who knows, you might just find a new favorite!

Spotify Moira Dela Torre Ivos Iv Of Spades Ben&ben Ben And Ben Juan Karlos Sarah Geronimo Silent Sanctuary Opm Music Pinoy Music
Your Guide to Thriving in This Strange New World
Staying
In? What to watch, what to eat, and where to shop from home
OR
Heading
Out? What you need to know to stay safe when heading out