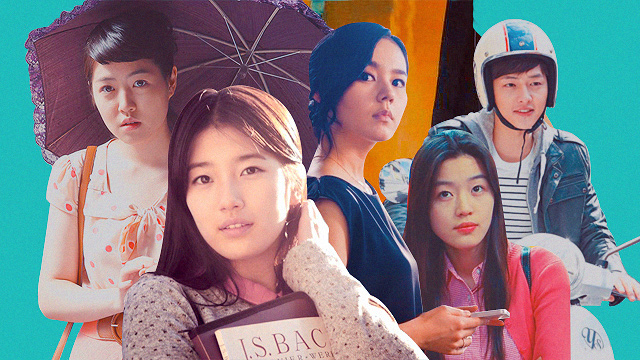 10 Korean Rom-Coms You Should Have Seen by Now

From the classics all the way to lesser-known gems!

(SPOT.ph) When you’re in the mood for something romantic but can’t sit through 13 episodes to watch your fave K-Drama stars fall in love, Korean rom-coms are the way to go! The land of hallyu knows a thing or two about romance and making audiences swoon, so don’t be surprised if you’ll be laughing or crying (or both!) as you breeze through our movie picks below.

Starring: Jun Ji Hyun and Cha Tae Hyun
You can’t talk about Korean rom-coms without the classic that spawned a handful of remakes all over the world. Based on a series of true stories published in a blog, the fun and wacky plot starts when a man (Cha Tae Hyun) encounters a drunk woman (Jun Ji Hyun) standing too close to the tracks of a train station.

Starring: Jun Ji Hyun and Jang Hyuk
Widely considered by fans as an unofficial prequel to My Sassy Girl, this 2004 film stars the same actress, Jun Ji Hyun, as an ambitious police officer who accidentally accuses (and arrests) a teacher as a pickpocket. If you loved My Sassy Girl, this movie contains several subtle references to the 2001 classic.

Starring: Uhm Tae Woong, Han Ga In, Lee Je Hoon, and Bae Suzy
This rom-com follows two college students in the ‘90s, Seung Min and Seo Yoon, who meet in their introductory architecture class, and immediately fall in love. 17 years and a breakup later, the adult Seo Yoon asks Seung Min to design her new home on Jeju Island. The twist? Seung Min is engaged and he’s about to move to the U.S.

Starring: Park Shin Hye, Uhm Tae Woong, and Choi Daniel
Based on a 1897 French play, Cyrano Agency revolves around Byeong Hoon (Uhm Tae Woong), who sets up a dating agency that promises a 100% success rate at making people fall in love. Things get complicated when their new client, Sang Yong (Choi Daniel) hires them to make Byeong Hoon’s ex fall for him.

Starring: Han Hyo Joon
When Woo Jin turns 18, he wakes up with a strange condition where he starts every day with a different face, gender, and nationality. Sometimes, he's a man, other times, he's a woman, but he remains the same person on the inside. This beloved rom-com features an excellent ensemble cast playing the same person, including Park Shin Hye, Lee Beom Soo, Park Seo Joon, Kim Sang Ho, and more.

Starring: Song Joong Ki and Han Ye Seul
If you know Song Joong Ki from Descendants of the Sun, you're in for a surprise in this rom-com. Unlike his charming and gallant character in the popular K-Drama, he plays Ji Woong, an unemployed college graduate who's so poor that he can't even afford condoms for his dates. He befriends his neighbor, Hong Sil, who teaches him her wild and hilariously frugal ways.

Starring: Na Moon Hee, Shim Eun Kyung, and Lee Jin Wook
Veteran actress Na Moon Hee stars as an elderly woman in her 70s who suddenly finds herself in the body of her 20-year-old self. When she realizes that no one in her life recognizes her, she decides to make the most of her situation and lives a new life as a musician. Fun fact: There's a Pinoy remake starring Sarah Geronimo, James Reid, and Xian Lim.

Starring: Lee Mi Yeon, Yoo Ah In, Kang Ha Neul, and Choi Ji Woo
If you liked Western rom-coms like Love, Actually, He's Just Not That Into You, and Valentine’s Day, this Korean romance film is right up your alley, as it features interconnected love stories from all walks of life. The movie brings together six singles in Seoul, weaving three romance plots that show the good and the bad in relationships.

Starring: Ji Sung and Kim Ah Joong
Yoon Jung (Kim Ah Joong) tries to spice up her five-year relationship by having phone sex with her boyfriend. Things get especially interesting when she accidentally calls a total stranger, Hyun Seung (played by Ji Sung), who's trying to get over his ex-girlfriend. From there, their friendship blossoms and turns into something more.