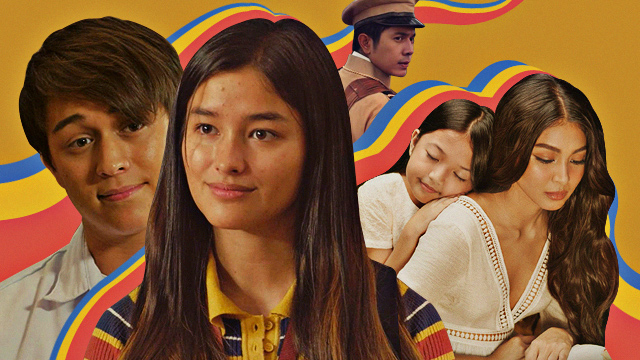 No, none of these were used as movie titles.

(SPOT.ph) A film isn't complete without its soundtrack. The right music, after all, has the power to amplify emotions and propel a scene to soaring heights. The past year has seen refreshing local movies take advantage of the perfect theme songs to enhance people's viewing experience. You may have seen these films, but have you paid much attention to their music? Take a listen, and we guarantee you'll want to show appreciation and add them to your playlists, stat.

Artist: Armi Millare
Movie: Alone/Together (2019)
In Antoinette Jadaone's latest film, Tin (Liza Soberano) and Raf (Enrique Gil) are former college lovers who meet each other again years later. The two have grown differently and have forged their own paths, but one thing remains the same: Their love for one another. Now, the two must navigate their complicated emotions, own romantic relationships, careers, and aspirations. In Armi Millare's touching ballad, "Kapit," she captures the bittersweet passage of time and how some things will just never be the same again—no matter how hard we try to hold on to them.

Artist: Rice Lucido
Movie: Ulan (2019)
The upcoming Ulan, starring Nadine Lustre and Carlo Aquino and directed by Irene Villamor, is expected to focus on self-discovery and self-love. In the haunting neo-folk soundtrack, "Heto Na Naman," up-and-coming artist Rice Lucido sounds both eerie and heavenly as she reflects on the inevitable darkness we all experience in life.

Artists: Jem Cubil and Andrea Babierra
Movie: Meet Me at St. Gallen (2018)
Celeste (Bela Padilla) and Jesse (Carlo Aquino) cross paths in a coffee shop, feel an instant connection, and eventually have a one-night stand. They then reunite a couple of years later at St. Gallen in Switzerland. "The Morning After," composed by the songwriting duo Thyro and Yumi, is a bubbly indie-pop song highly fitting for the meet-cute element in Villamor's endearing romantic comedy.

Artist: Ben&Ben
Movie: Goyo: Ang Batang Heneral (2018)
Local folk pop act Ben&Ben's "Susi" is the official theme song of Jerrold Tarog's sequel to his acclaimed 2015 historical biopic Heneral Luna. Twins Paolo and Miguel Guico submitted the single to the producers for consideration, and it ended up being the perfect fit. Written years ago during a hard time in their college days and then given a grander arrangement for the film, the song tackles overcoming adversities in pursuit of one's dreams.

Artist: Sean Oliver
Movie: Bakwit Boys (2018)
In Jason Paul Laxamana's 2018 musical, Bakwit Boys, the songs were seamlessly woven into the narrative. The finalist in the 2018 Pista ng Pelikulang Pilipino follows four brothers (Vance Larena, Nikko Natividad, Ryle Santiago, Mackie Empuerto), who leave their hometown after a devastating typhoon and stumble upon a unique opportunity to turn their lives around using their musical talents. "Ligtas Ka Na" is a feel-good ballad that encourages hope and inspires grit during trying times.

Artists: Ferdie Jarin and Jedie Cortez
Movie: Tanabata’s Wife (2018)
The film adaptation of Sinai Hamada's short story set in 1920s Cordillera is one of the six finalists in 2018's TOFARM Film Festival. Directed by Choy Pangilinan, Charlson Ong, and Lito Casaje, the movie follows the love story of Tanabata-San, a successful Japanese immigrant farmer, and Fasang, a young and feisty farmhand. "Panimdim Sa Dilim," with words and music by Ferdinand Pisigan Jarin, is a stripped-down folk number that will tug at your heartstrings.

Artist: Midnight Meetings
Movie: Exes Baggage (2018)
Dan Villegas' hit romance drama movie starring real-life exes Angelica Panganiban and Carlo Aquino tells the story of two former lovers who meet again by chance and look back at how their past relationship blossomed, plateaued, and eventually withered. The soulful and subtle "All Tonight" speaks of those carefree moments when all possible consequences are forgotten and the present is all that matters.

Artist: Lara Maigue
Movie: Kung Paano Hinihintay ang Dapithapon (2018)
Carlo Catu's entry to Cinemalaya 2018 tells the story of an unmarried elderly couple whose monotonous life together is disrupted when the woman's estranged husband reaches out. The heartwarming film sends a strong message about forgiveness and closure. And the soundtrack "Sa Piling Mo, Mananatili," composed by Jhaye Cura, is a song about longing with a stripped-down acoustic arrangement.