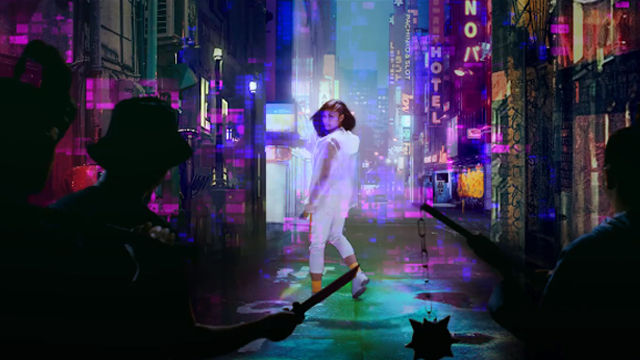 Erik Matti's New Animated Film Yo! Takes You to a Neon-Colored World

It was shot entirely on green screen!

(SPOT.ph) As the mind behind the thought-provoking Honor Thy Father, the intense On the Job, the spine-chilling Seklusyon, and the heart-pumping BuyBust, Erik Matti is once again pushing the envelope in his new film, Yo! The movie, set to premiere in 2019, is going to be filmed completely on green screen. And by the looks of the trailer, it already deserves a spot on your must-watch list for the year.

In the teaser, a young girl named Tala Aragon (played by Filipina Taekwondo champion Pauline Lopez) talks about getting bullied and what she's learned about fighting back—or, more accurately, not fighting back—and having her faithful yoyo by her side. Matti says it's "a film set in its own world with its own kind of pop jargon set in urban Manila with some hyperreal settings. Please note that they will not be in cyberspace but they will be in their own animated graphic world when they focus on their best friend, the yoyo."

Matti says that Yo! is Reality Entertainment's second attempt at an all-green-screen film after 2008's Tiktik: The Aswang Chronicles. "Tiktik marked Reality Entertainment’s return to movies after doing advertising for so many years. But there was a lot to improve on the monsters of Tiktik." Some of these improvements include "art direction, quality control, and updates on current softwares abroad that could smoothen our workflow and make magic on the computer."

With these developments, they've made Yo! "a hyperreal fantasy movie that makes use of our favorite classic Pinoy toy, the yoyo." He adds, "Yo! brings this old-fashioned childhood toy of ours to the 21st century video-game generation."

He also says that Yo! is just one out of four family films he's producing for 2019. "Two years back, after Honor Thy Father, I mindlessly exclaimed in one drunken night that I want to start doing family movies. And I wasn’t drunk enough not to remember it since both my partner Dondon Monteverde [and I] have always loved children [and] family movies."

The fascinating visuals of the trailer are already enough to get you hooked so it'll be more exciting to see the brightly colored and animated world of Yo! come to life.

Erik Matti Yo Pinoy Movies
Your Guide to Thriving in This Strange New World
Staying
In? What to watch, what to eat, and where to shop from home
OR
Heading
Out? What you need to know to stay safe when heading out